The Golden Pheasant or Red Golden Pheasant is one of the best known and easiest pheasants to keep and breed in backyard aviaries. Some can become quite confiding, taking treats right from their caretaker’s hand.

These strikingly beautiful and hardy pheasants breed readily -and are, therefore, a great choice for beginners. These are small pheasants and do not require a very large aviary. They are winter hardy and able to withstand cold temperatures with little shelter. Since they are forest birds by nature, you will need to provide plenty of shade for them during the hot summer months. Direct sunlight will cause the male’s plumage to fade.

Often Golden Pheasants are fed on mixed grains and greens. Many people also offer diets formulated for game birds as a nutritional basis.

These pheasants are extremely compatible with other types of birds. They have been raised alongside waterfowl, doves, pigeons and even peafowl. It is, however, not recommended to keep them in the same aviary with other species of pheasants. 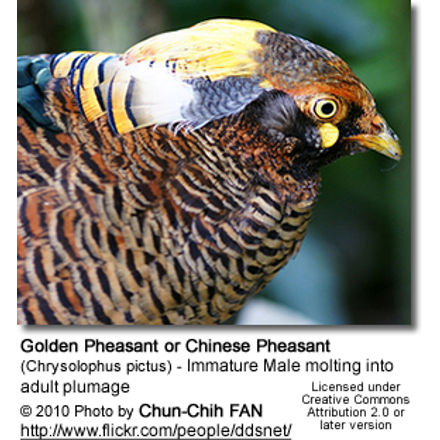 Although they may not have full coloration yet, male Golden Pheasants are usually sexually mature by the time they are about a year old. One fertile male can service up to four females. Courtship occurs in the spring and is fun to watch. You will notice that the males are “show-offs”, often displaying their ruff with no hens around . Although the males do not acquire their beautiful colors until their second year, first year cocks are often fertile.

The hen will begin to lay her clutch of 5 to 12 eggs in April and, if removed for incubation, another clutch will usually be deposited in June.

The hen incubates the eggs for 22 to 23 days. It has been noted that not all Golden hens have good mothering skills and they may be careless with their eggs or chicks. It is encouraged to provide as much natural surroundings as possible to encourage the hens to incubate. To avoid any problems, it is best to pair an inexperienced pheasant with one who has bred in the past to increase a successful hatch and good parenting.

The chicks are generally easy to raise and are good eaters. In fact, they are often used as role models to teach the chicks of other species to eat on their own. Golden chicks are easy to sex when very young. The color of the female’s iris is a dark brown, while the male’s is much lighter. 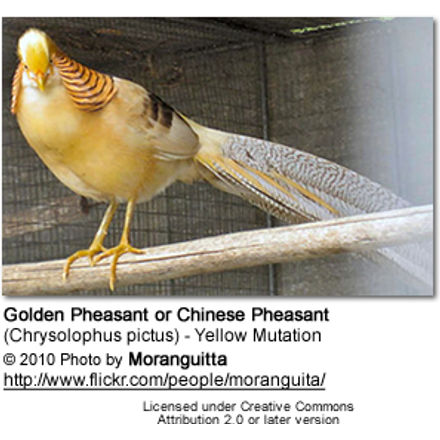 Several interesting mutations have been developed in captivity. This being said it is opined that some of the “mutations” really are hybrids — the result of cross-breeding with the closely-related Lady Amherst pheasants, for example. Below listed are some mutations : 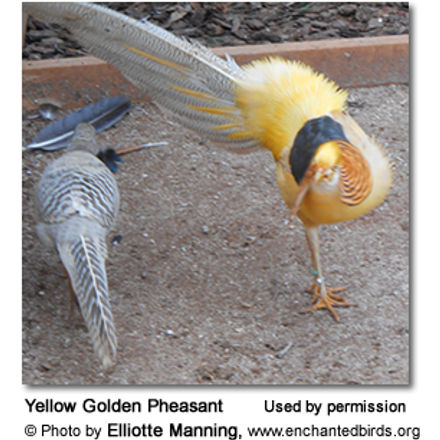 There will always be breeders who will claim to have bred a new mutation, which in reality turns out to be a hybrid. As mutations sell for more money and mutations are difficult to breed (unless you start with birds that already carry the gene) — it is often a financial consideration for unethical breeders to be less than truthful about the pureness of their stock.

It is the goal in aviculture to keep species pure. To this end, be careful when considering purchasing a so-called “new mutation” — request photos and as much information as possible about the development of this “mutation.”

With careful observation of ADULT Golden Pheasants, you will be able to see the signs of a cross-breeding. The male will have the following if crossed: