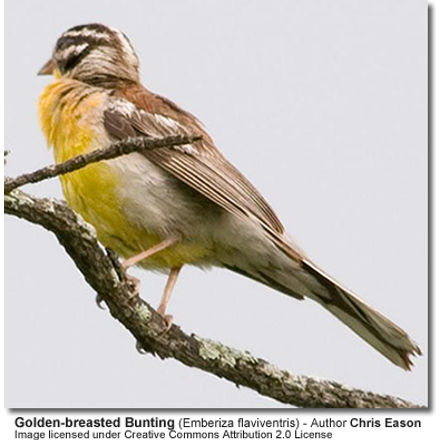 The Golden-breasted Bunting, Emberiza flaviventris, is endemic to the dry open woodlands in Africa south of the Sahara, but is absent from the equatorial forest belt. This species is generally resident, but there appears to be degree of local movement. It is often quite tame.

The Golden-breasted Bunting is not gregarious, and is normally seen alone, in pairs or small groups.

The Golden-breasted Bunting is 15-16cm long. The adult male has striking head pattern with a white crown, black lateral crown stripes, white supercilium (line above eye) and black-bordered white ear coverts (feathers covering the ears). The underparts are orange-yellow becoming yellow on the throat and whitish on the lower belly. The upperparts are chestnut with a grey rump. The browner wings have two conspicuous white wing bars. The sexes are very similar, but females may have a buff tone to the white head markings and browner head stripes, and the back may have dark streaks. Young birds are duller and paler than the females.

E. f. princeps is similar to the nominate form, but larger, and paler below. E. f. flavigaster is more distinctive, having a paler, redder back, pale grey rump, paler yellow underparts and whiter flanks.

This species is found in a variety of open woodlands. Flavigaster favours acacia steppe and savanna, with the other subspecies occurring in a wider range of lightly wooded country including gardens.

The Golden-breasted Bunting builds an untidy cup nest lined with fine grass or hair low in a shrub or sapling. The 2-3 eggs are glossy white or cream and marked with black lines. The eggs hatch in 12-13 days and the chicks fledge in another 16-17 days.

It feeds on the ground on seeds, insects and spiders, animal prey being taken mostly when the birds have young.