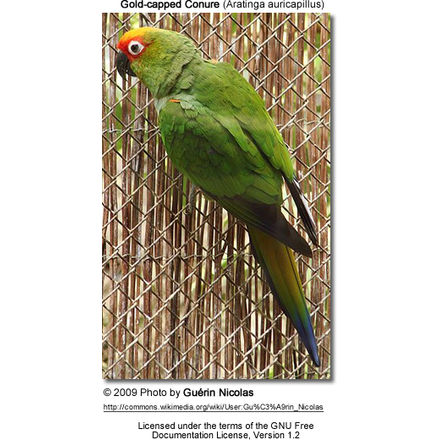 The existence of this conure is threatened by habitat loss.

However, Gold-capped Conures are prolific breeders, making them popular birds in aviculture, and hand-fed golden cap babies are generally available.

The Gold-capped Conure grows to about 13 to 14 inches in length and weighs about 150 grams. Their bodies are mainly green, with blackish bills, gray feet and brown irises. The forehead, the areas around the eyes and underwing coverts are usually red. The breast feathers are a red and green mix. Their tail feathers are olive green with a bluish tip. The primary feathers, wing coverts, and under-wing coverts are blue.

Immature Golden-capped Conures are essentially green, with some orange around the eyes, above the beak, and on the breast near the wings. Some navy is mixed in with the green of the tail. The bird’s full coloration is not seen until they are sexually mature at about two years of age.

Their lifespan is about 30 years. 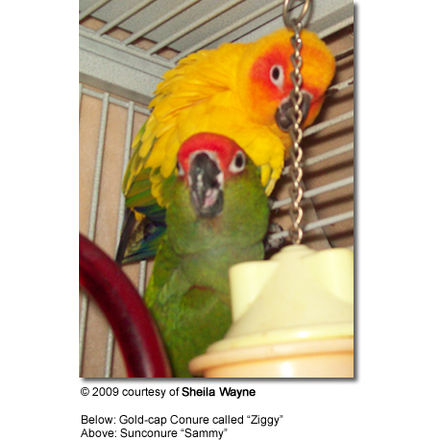 The Golden-capped conures are cheerful, affectionate little birds, who love to cuddle. They need plenty of playtime and one-on-one attention. The Gold Caps are a little more mellow than some of the other smaller Conure birds. They are trainable, and can learn to speak a few words.

Gold-capped conures have a loud scream and typically are noisy at dawn and at bedtimes. They will also shriek when they are scared or excited — when you come home, for example, he or she will enthusiastically greet you.

They love to “customize” their environment, i.e., chew on your furniture and take things apart. Providing them with lots of wooden toys and natural branches will be important to keep them occupied and, hopefully, stop them from destroying your furniture.

Golden-capped Conure also go through nippy stages and they require some training to stop this behavior. Fortunately, they are smart and respond well to training. 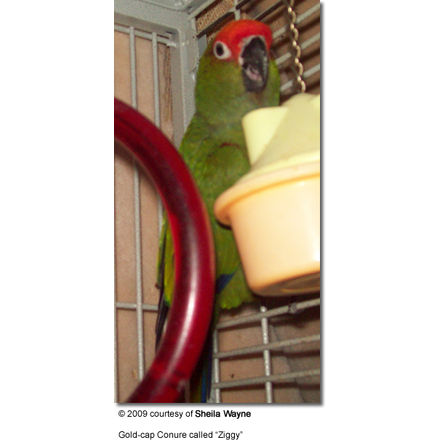 Golden-capped Conures breed very well in captivity and reach sexual maturity at about two years of age. Golden-cappeds are not sexually dimorphic – only a DNA test, or the laying of an egg, will establish an individual’s sex.