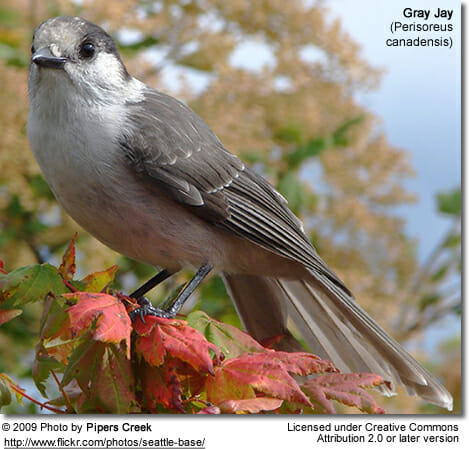 The Gray Jay, Perisoreus canadensis, is also known as the Camp Robber and the Whiskey Jack, in various spellings; the latter name originates from the Cree word wiiskachaan. At one time, it was known as the Canada Jay.

The Gray Jay is a medium-sized jay.

Adults are gray on the upperparts, with a white forehead, face and throat. They have a dark cap and a short thick dark bill. They are slightly smaller than a Blue Jay. They are permanent residents; some may move from higher elevations in winter. A pair will defend their territory year round. These birds mate for life.

They usually nest low in a dense conifer. The female lays 3 or 4 eggs. The female incubates the eggs and stays with the young birds at first while the male brings food to the nest. Later, both parents feed the young. These birds are opportunistic feeders. They will capture live prey and also scavenge dead animals. They are bold about approaching people and will steal food from any campsite left unguarded. (Some have even been known to seize food from an inattentive human’s hand.) They sometimes catch insects in flight. They are omnivorous, eating insects, berries, seeds, small rodents and bird eggs. They cache food throughout their territory in preparation for winter, using their sticky saliva to “glue” items to crevices in tree bark and other storage locations.

Recently published research suggests that these birds may be declining in the southern parts of their range because they rely on cooler temperatures during the autumn and winter to keep the cached food edible. This decline may be the result of global warming.

Their call is a soft whistle. They produce a wide variety of noises, including harsh cries and chuckle-like sounds.