The Great Antshrike, Taraba major, is a passerine bird in the antbird family. It is the only member of the genus Taraba.

It is a resident breeder in the tropical New World in southern Mexico, Central America, Trinidad and South America down to northern Argentina and southeastern Brazil. Interestingly, sleeping birds are readily located at sites such as the Asa Wright Nature Centre on Trinidad.

This is a bird of thickets, cocoa and citrus plantations and sometimes gardens, with a preference for dense undergrowth. It is usually found as territorial pairs.

The female lays two, sometimes three, grey-marked white eggs in a deep cup nest in a shrub, which are incubated by both sexes for 14 days to hatching. The chicks fledge in another 12 days. 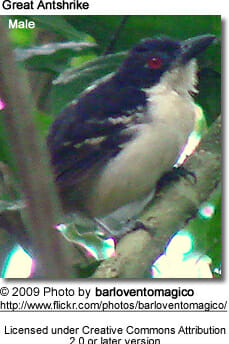 The Great Antshrike is a large and distinctive antbird, typically 20.3 cm long, and weighs 56 g. It has a crest, heavy hooked bill, and brilliant red eyes. The adult male has black upperparts, with two white wingbars and white underparts.

There is a white dorsal patch normally concealed except in threat display; young males are similar to the adult, but have rufous wing coverts. The female has rich rufous upperparts and white underparts.

The Great Antshrike feeds on insects and other arthropods gleaned from foliage. It will also take small lizards and mammals.

It is a skulking species, which may be located by its song, 30 to 40 musical pook-pook-pook notes, or a snarled churrrr.