The Great Argus, Argusianus argus, was named by Carolus Linnaeus for the many eyes-like pattern on its wings. In Greek mythology, Argus is a hundred-eyed giant. It is also known as Phoenix in some Asian areas.

This pheasant’s natural habitat can be found in the jungles of Borneo, Sumatra and Malay Peninsula in Southeast Asia, where it can be seen feeding on the forest floors in the early mornings and evenings.

They appear to prefer primary forest areas; they are progressively less common in old and young secondary forests.

The Great Argus’s breeding display is remarkable. The male clears an open spot in the forest and prepares a dancing ground.

He announces himself with loud calls to attract females, then he dances before her with his wings spread into two enormous fans, revealing the hundred of flashy “eye-spots” eyes.

The Great Argus is monogamous.

The hen lays only two eggs. 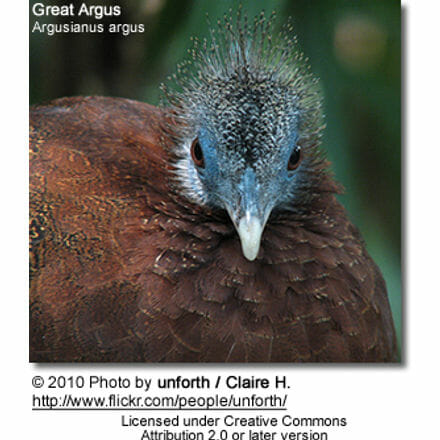 There are two living sub-species and, presumably, one extinct: 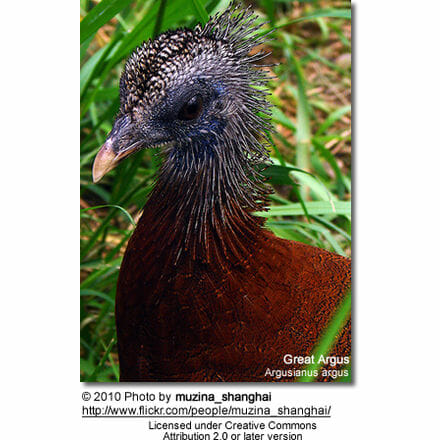 The Great Argus, Argusianus argus is large – in fact, the male is amongst the largest of all pheasants measuring up to 6.5 feet (~2m) in length. This pheasant has very long tail feathers.

The plumage is mostly rusty brown with intricate buff and black spots and patterns. The underparts are a darker rufous color. It has black hair-like feathers on the crown and nape, and red legs.

The female looks similar, but is generally smaller and the plumage is duller than that of the male. She has a shorter and less ornate tail and wing feathers, and has fewer “eye-spot” markings. Her plumage is a darker rufous.

Both sexes share the blue bare skin of their heads and necks, short dark crests, red feet and yellow bills. Their irises are red brown.. 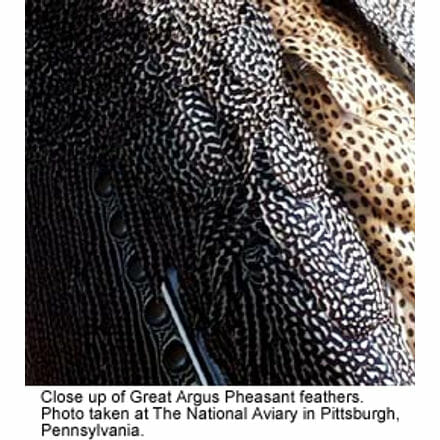 Male makes explosive, clear, double note kow wow often in response to the calls of other males or a perceived danger. Another call, made by either sex, is a series of 20 or so clear wow notes on the same pitch, rising and speeding up slightly at the end.

Listed as a CITES II, a near-threatened species, the primary threat to survival is habitat destruction and hunting in some areas.

They are believed to be in good numbers on the Malay Peninsula and on Borneo, but the Sumatran population is in rapid decline. 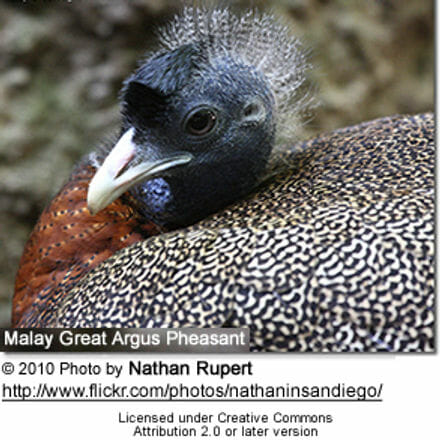 These large pheasants are calm and gentle birds with a great personality. They are rarely seen in private aviculture even though they are not difficult to keep or raise. However, they do need heated accommodation in the winter and, therefore, are expensive to keep in the colder climates.

Young males attain adult plumage in their third years. The wings can continue to grow until the bird reaches its sixth year.

The hens make excellent mothers. They only average 2 eggs per clutch which the hens incubate for 25 days. If breeders pull the first clutch, the hen will produce a second – and often even a third clutch.

It is not recommended to allow her to lay more clutches in a season as this could result in health problems, or the hen may take a break and not lay for another two years. It is a good practice to allow her to raise the last clutch by herself.

Breeders may decide to incubate the first, occasionally second clutch, and raise the hatching young in a brooder. Chicks are fed chick starter and mealworms. The chicks grow fast and are very friendly.

These pheasants should be provided a spacious, planted aviary with large heated indoor shelter to protect them from the elements.