The Great Black-backed Gull was one of the many species originally described by Linnaeus in his 18th century work, Systema Naturae, and it still bears its original name of Larus marinus.

The maximum recorded age for a wild Great Black-backed Gull is 27.1 years.

The adults have black wings and back, with conspicuous white “mirrors” at the wing tips. The legs are pinkish, and the bill yellow with a red spot.

Young birds have scaly black-brown upperparts, and a neat wing pattern. They take at least four years to reach maturity, development in this species being somewhat slower than that of other large gulls.

The call is a deep “laughing” cry.

Great Black-backed Gulls are opportunistic and get most of their food from scavenging (refuse at times comprising more than half of their diet) and capturing fish. However, unlike most Larus gulls, they are highly predatory and frequently hunt and kill any prey smaller than themselves, behaving more like a raptor than a typical larid gull. They frequently rob other seabirds of their catch and have been known to follow feeding Humpback Whales, Porbeagles and Northern Bluefin Tuna to catch fish driven to the surface by the larger animals. 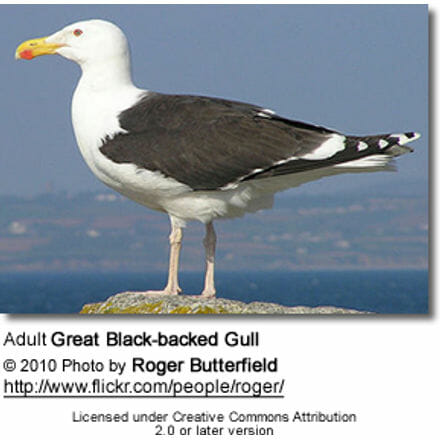 This species breeds singly or in small colonies, making a lined nest on the ground often on top of a rocky stack. A female lays one to three eggs. Young Great Black-backed Gulls leave the nest area at 50 days of age and may remain with their parents for months afterwards, though most fledglings choose to congregate with other immature gulls in the search for food. Chicks and eggs are preyed on by crows, cats, other gulls, storks, raccoons and rats. The Bald Eagle and White-tailed Eagle are the only birds that take healthy, fully-grown Great Black-backed Gulls. Killer whales and sharks also prey upon adult birds.