The Great Grey Owls (Strix nebulosa) are known by a variety of names, some of which refer to their physical characteristics – such as Dark Wood Owls, Cinereous Owls and Bearded Owls; and other names that symbolize their association with the mystic, including Great Grey Ghosts, Phantom of the North, and Spectral (Ghostly) Owls.

These very reclusive owls occur naturally in the forests of the Northern Hemisphere.

In North and Central America, they are the largest naturally occurring owls. Their large size combined with the lack of ear tufts make them distinctive within their range.

They tend to be sedentary, only leaving their territories if food is no longer readily available.

Great Grey Owls are unevenly distributed throughout North America – from Alaska across Canada, south to the higher elevations of the Rocky Mountain States, west to the Pacific Coast and east to northern Minnesota and Wisconsin. Their southernmost population consisting of about 100 birds occurs in the Sierra Nevada Mountains of California. They may wander into New England, New York, and northern Michigan.

They also occur widely across northern Europe, including Scandinavia, and northern Asia.

In North America, they inhabit mixed dense *coniferous forests in Canada and montane coniferous and red fir forests in the western States. (* forests with trees that produce their seeds in cones, such as pine trees). They are usually found close to open areas, such fields, meadows or bogs (wetland) – their hunting grounds; and generally remain well secluded from human activities.

They are permanent resident throughout their range; however, they may move into new areas when food is scarce. 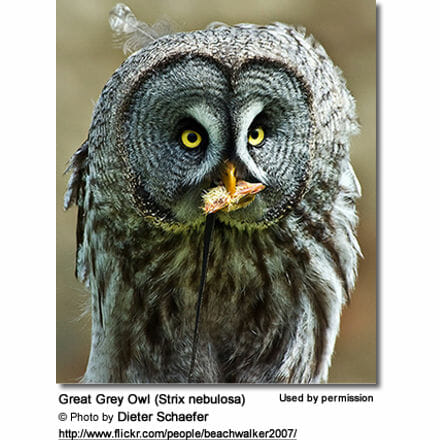 The head is round, without any ear tufts. The face (facial disk) is grey with darker circles around the yellow eyes and a black chin spot just above two white-feathered mustaches. The upper plumage is grey with pale bars and the plumage below is light with dark streaks. There is a prominent white collar on the front of the neck.

When perching, the long tail extends beyond the folded wings. The feet are heavily feathered. Their eyes (irises) are yellow.

Great Grey Owls are larger than other owls and have a greyer plumage. They can also be separated from other owls by their yellow eyes and bill. The head is rounder without any ear tufts.

Great Grey Owls primarily feed on small mammals, such as mice, rats, voles, pocket gophers, shrews, squirrels, rabbits, moles and weasels, with small rodents making up about 80 – 90% of their diet.

In the northern parts or their range – such as Alaska, Canada and Oregon – voles are their major prey; and in California, they mostly take pocket gophers or gophers when vole populations are low.

Rarely, they will also hunt birds, such as crows, small hawks, American Robins, ducks and grouse; as well as frogs, toads, snakes and insects.

Most hunting occurs early morning or late afternoon, particularly during the winter. However, they will hunt at any time of the day or night, if opportunities arise or when feeding hungry young.

They usually swoop down on their prey from their favorite perch; but may also fly low through open areas in search of prey.

The breeding season usually starts in late winter, when males perform aerial displays for the females and bring them food. Bonded pairs engage in mutual preening and feeding throughout the day .

Pairs generally take over abandoned stick nests of other large birds (such as ravens, crows and other birds of prey, including Northern Goshawks); or they may make their nests in the cavities of large trees or the hollowed out top of large-diameter snags.

They are also known to nest on the top of clumps of mistletoe. In Europe, they may even nest on the forest floor. Some will also accept artificial platforms. They usually tidy up the nests and refurbish them before use, adding nest linings such as shredded bark, conifer needles, deer hair and moss.

Males choose several possible nest sites and attract females to them to inspect them. The females then choose the final nest sites.

Nests are usually found in forests with large clearings or meadows nearby for hunting.

Eggs are usually produced in March through June (depending on temperatures) and a clutch consists of 2 to 5 white, oval eggs (mostly 4). One egg is laid every 1 to 2 days until the clutch is complete. The female alone incubates the eggs for 28 – 29 days, while the male guards the nest and takes food to nesting female.

The hatchlings are covered by soft white down and their eyes are open. Soon, the down is replaced by feathers.

Both parents tear food into very small pieces and feed them to the hungry chicks; and they aggressively defend their nest and their young. They have been known to drive off predators as large as black bears.

Great Grey Owls may not breed every season; only when food is abundant and the number of chicks raised is also tied to food availability. They usually only nest once a year, but will replace lost clutches or broods.

The Great Grey Owl’s most familiar call is a soft, low-pitched hoot “whooo-ooo-ooo-ooo” emitted slowly over a 6 to 8 second period. Their calls are often repeated every 15 to 30 seconds.

Nesting females will great males as they approach their nests with food with an excited “ooo-uh.”

Their calls are described as bold, deep, boominghoo-hoo-hooo.

Their shorter lifespan in the wild is mostly due to starvation, predation by Great Horned Owls, marten and wolverines, and human-caused fatalities, such as shootings, electrocutions, and collisions with vehicles as they venture into populated areas in their search for food.