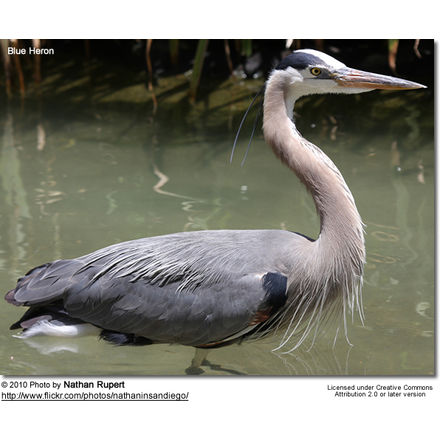 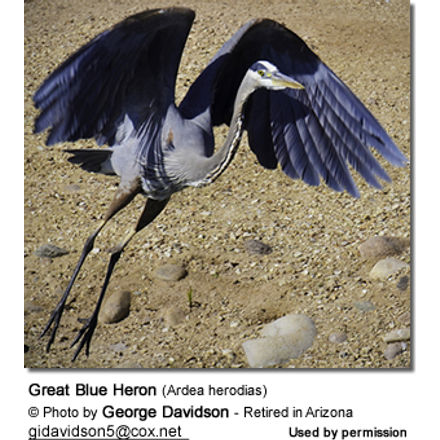 The Great Blue Herons (Ardea herodias) are the most common and best known of all wading birds. They occur naturally in North and Central America, as well as the West Indies and the Galápagos.

In North America, they are the largest of all naturally occurring herons. Globally, this heron’s size is surpassed only by the Goliath Heron and the White-bellied Heron. The Great Blue Heron is sometimes referred to as a “crane” – erroneously so, since there are not related to the crane family. 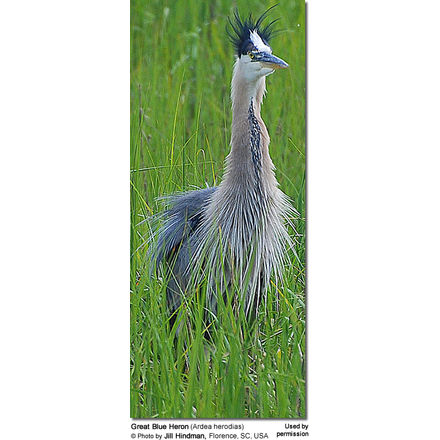 Great Blue Herons are related and resemble the slightly smaller European Grey Heron and the similar-sized South American Cocoi Herons or White-necked Herons. Since their ranges don’t overlap – with the exception of some occasional vagrants – confusion is unlikely for the most part. The Great Blue Heron can be identified by their chestnut-brown flanks and thighs, and the Cocoi Heron has more extensive black markings on the head than the other two.

They are typically found near the shores of open water and in wetlands over most of North and Central America as well as the Caribbean and the Galápagos Islands; and are rare vagrants to Europe.

These majestic birds often stand motionless as they scan their environment for prey, or slowly wade in water with long, deliberate steps. Once they spot their prey, they will strike like lightning to grab a fish or frog. In flight, they are easily recognized by their tucked-in necks and long legs trailing out behind.

Great blue herons are mainly active in the mornings and at dusk when fishing is best. They are solitary predators, preferring to hunt alone. They also travel alone, except during migration when one might see up to 10 together.

However, they often breed in groups called colonies, and during the day they will sleep with flocks of over 100 other herons. Great Blue Herons are also extremely territorial and will aggressively defend their nests. 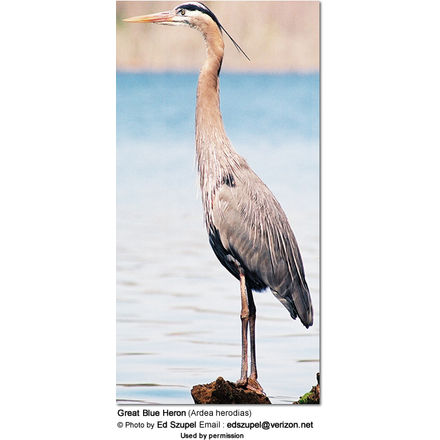 The subspecies mostly look alike; except for slight differences in size and plumage tone. The exceptions being the white morph (also known as the Great White Heron) only found in south Florida and some areas in the Caribbean; and an intermediate morph (or hybrid ?) found in southern coastal Florida.

The Great Blue’s range stretches from southern Alaska and southern New England, British Columbia through southern Canada to the Unites States and Mexico, the Caribbean (the West Indies) and the Galapagos Islands situated in the Pacific Ocean west of continental Ecuador in northern Southern America.

They occur in any habitat that offers easy access to water. They are not found in deserts and high mountain areas.

Those populations found east of the Rockies (in the northern part of their range) are migratory and travel south to winter in Central America or northern South America. Those found in southern United States southwards and on the Pacific coast are resident (non-migratory).

They occur in both saltwater and freshwater habitats; in marshes, rivers, lakes, bays, lagoons, open coasts / shores and ponds. They may also raid backyard goldfish ponds or forage in grasslands or agricultural fields.

They are native to:

They are vagrants (occasional visitors) to the following countries: 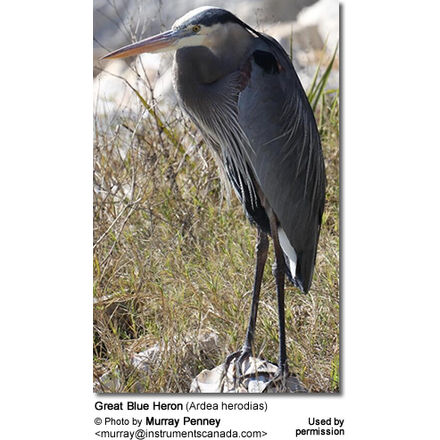 This Great Blue Heron is the largest North American heron:

Males are generally larger in size and have a puffy plume of feathers behind their heads; otherwise males and females look alike.

In flight, they can easily be identified by their slow, yet strong, wing beats, tucked-in neck and trailing long legs. In flight or when resting, the Great Blue Heron usually tucks its head into an S-shape.

The adult plumage is mostly dull blue-grey except … 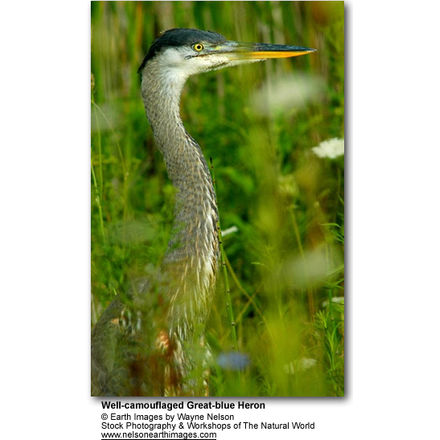 There is also an all-white version of the great blue heron, the great white heron. By some considered a white morph, by others a separate species. The Great White occurs in coastal southern Florida. It has an all-white plumage, yellow legs and a yellow bill.

Juveniles have a duller plumage; a dull blackish-grey crown, and a weakly defined flank pattern. The bill is dull grey-yellow. 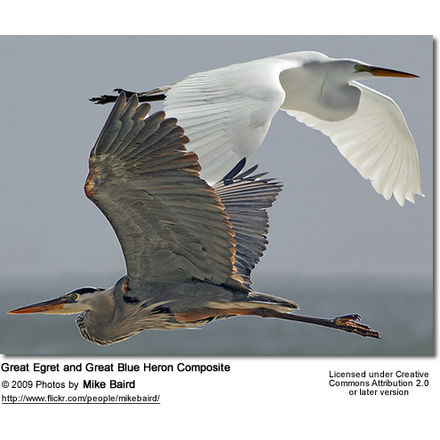 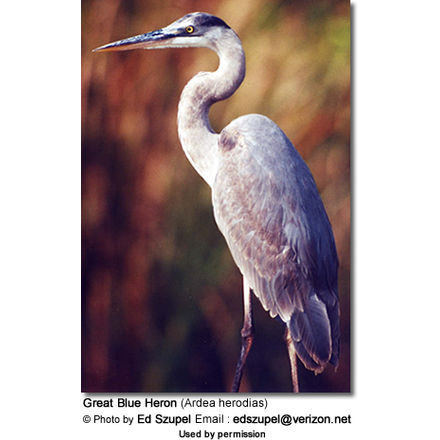 They are monogamous, remaining with one mate per breeding season. They typically produce only one brood a year; however, may raise another brood, if the first clutch gets destroyed or abandoned.

Great Blues typically breeds in colonies – sometimes alongside other species of herons. There may be between 5 – 500 nests per colony; the average being 160 nests. Such breeding colonies are known as “heronries” or “rookeries.” They typically seek out habitats that include tall trees for nesting.

These bulky yet shallow platform nests are constructed out of sticks and twigs, and lined with soft material (plant material, feathers, down, etc.). These nests are typically placed high off the ground into the branches of trees or shrub, and to a lesser extent in the reeds or on the edges of cliffs. The nesting sites are close to bodies of water or wetlands, swamps, tidal flats, shallow coastal bays, or shores of ponds, lakes and rivers. Great Blues usually nest in the same spot from year-to-year; and may even use the same nest.

The female lays 2 – 7 (mostly 4) pale blue eggs, which are incubated for about 25 – 30 days to hatching. The young hatch over several days; and both parents feed them with regurgitating food. The first chick to hatch is generally the largest and strongest chick and will receive the most food and will, therefore, grow faster and has a better chance of survival than its smaller siblings. 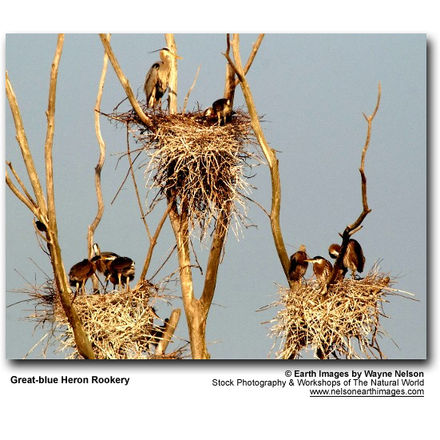 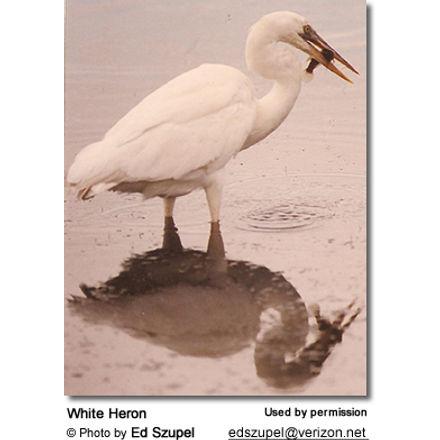 When and where they feed …

Great Blue Herons feed throughout the day; but most of their foraging occurs around dawn and dusk.

They generally feed in shallow water or at the water’s edge; but will also field in fields or drop from the air or a perch into the water to catch prey.

How they hunt and eat …

Great Blue Herons may establish feeding territories in winter, which they aggressively defend.

While foraging, they either wade slowly or stand still, stalking fish, frogs and other prey in shallow water or open fields. They may also drop from air or a perch into water.

Once they spot their prey, they grab or stab their prey with their long, sharp bill and a lightning-fast thrust of the neck and head.

They usually swallow their prey whole, and have been known to choke on prey that is too large. Outside the breeding season, they generally hunt and feed alone. 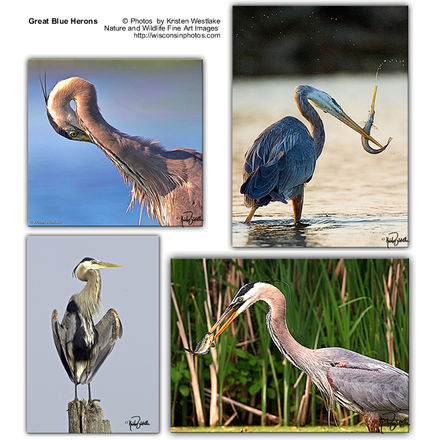 Great Blue Herons are generally quiet. When startled, alarmed or during territorial disputes, the Great Blue Heron’s will emit harsh croaking sounds: kraak. When disturbed near their nests, their calls sound like fraunk. When greeting members of their family, an ar can be heard. During courtship displays, they also snap their bills together and use complicated body movements to attract a mate.

In the wild, Great Blue Herons have a maximum recorded lifespan of 24.5 years; however, most do not live that long. The average lifespan for a great blue heron is around 15 years. As with most animals, they are most vulnerable when they are young. More than half (69%) of the great blue herons born in one year will die before they are a year old.

Repeated human disturbance close to the nesting site can also result in abandonment of eggs or chicks. 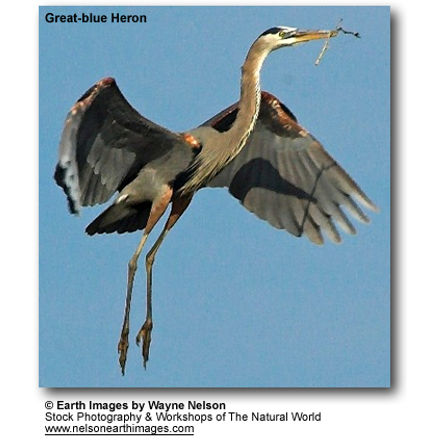