The Greater Adjutants (Leptoptilos dubius) are also known as Greater Adjutant Storks or, simply, Adjutants. Historically, they were referred to as Gigantic Cranes and, later, as the Asiatic Marabous.

These large members of the stork family are related to the Lesser Adjutants.

The longest recorded lifespan in captivity was 43 years.

However, they have become extinct over much of their range due to destruction of nesting habitat and feeding sites, hunting for the use of their meat in folk medicine, and egg collection. Less than 1,000 of them are still believed to occur in the wild.

Only two small breeding populations are still reported to be in existence: the largest colony in the Indian province of Assam (in the Brahmaputra Valley) – a northeastern state of India – and the other being found in Cambodia. In the 19th century, they were particularly common in the city of Calcutta during the summer and rainy season, where they were known as “Calcutta Adjutants”. At that time, they were valued as scavengers – which benefitted the City’s sanitation – and their image was incorporated in the logo of the Calcutta Municipal Corporation.

After the breeding season, they migrate south to Vietnam, Thailand and Burma (Myanmar) for the winter.

Greater Adjutants inhabit wetland habitats, especially those that are partially dry and where fish are abundant, such as marshes, lakes, swamps, mangroves, river beds, stagnant pools and paddy fields; as well as grasslands and fields.

This bird species is classified as Endangered (EN) on the IUCN Red List 2007. 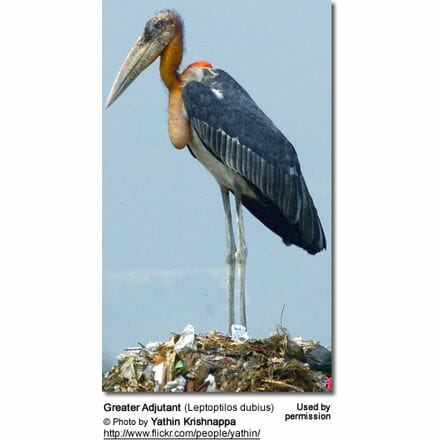 Their heads are bare (except for a few stray, hair-like feathers) and pinkish in color; and they have distinctive low-hanging neck pouches that differentiate them from the related, similar looking Lesser Adjutant. The inflatable pouch is not connected to the digestive tract. Its function was previously believed to be for food storage, but since this pouch connects to the air passages, this appears to be unlikely. When breeding, the pouch and neck turn bright orange and the upper thighs reddish.

Their dark grey legs are often stained white with uric acid as they commonly defecate on them. This is believed to be a cooling measure, as the evaporation lowers their body temperature offering relief when temperatures are uncomfortably high. Their long, wedge-shaped bills are very thick and yellowish.

The plumage is mostly dark grey, except for the white collar ruff with the red skin on the neck showing through, the off-white or pale grey abdomen and undertail feathers, and the pale leading edges of each wing.

Their large outstretched wings are perfectly adapted for soaring on thermals. In flight, they can be recognized by their pale plumage below (abdomen and under tail feathers) and their tendency to retract their necks, like herons.

Immature birds can be identified by their duller upper plumage, completely dark wings, narrower bills, and thicker down on the head and neck. They also have more feathers around the neck. 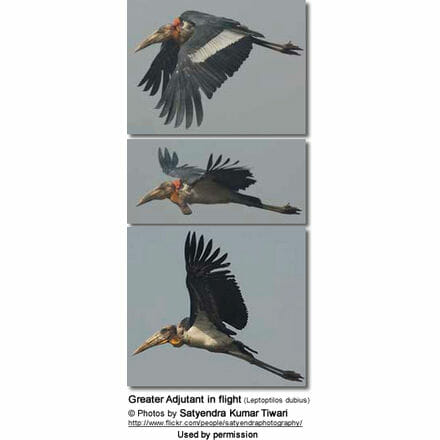 Greater Adjutants are believed to be monogamous – however, they may not always pair for life. Typically solitary birds, they only form groups during the breeding season.

Greater Adjutants breed during the dry season – from October to June, with most eggs being laid between November and January.

At the onset of the breeding season, Greater Adjutants congregate at nesting areas in tropical wetlands. They often form small colonies – sometimes including other large waterbirds, such as Pelicans – and several of them will build their nest in the canopy of one single, tall, broad-limbed tree with sparse foliage or in bamboo plantations. Historically, they also nested on cliffs.

Prior to nest building, they occupy favored trees and males will claim suitable nesting branches, chasing away competitors. At this time, they are commonly seen perching on the branch pointing their bill upwards while clattering them; arching their bodies or holding their wings half open and drooped. Males will present twigs to their mates as part of the courtship ritual. Pairs will also perform up-down bobbing motions together.

The large platform nest is constructed by both parents out of twigs with an outer layer of bamboo stems, and the shallow top indentation is lined with grasses and leaves. The nest is typically placed at the end of near-horizontal branches or on rocks / cliffs.

The female will lay 2 – 3 white eggs at intervals of 1 – 3 days. Both parents share the incubation of the eggs for about 28 – 30 days to hatching. Both parents feed and care for the chicks. During hot weather, the parents are observed spreading out their wings to shade the chicks, and they will also bring water to the nestlings – either for drinking or to cool them down. The chicks leave the nest when they are about 90 – 100 days old. The parents continue to feed them until the young are about five months old.

Greater Adjutants are mostly scavengers of large carcasses (including human corpses) and within their range, are commonly referred to as “hargila” – meaning bone swallower. As distasteful as this may appear to most, these valuable scavengers of discarded, unburied human corpses and other large carrion are believed to play an important role in preventing the spread of disease.

They are commonly found near human garbage dumps where they often scavenge in mixed flocks.

Greater Adjutants are typically observed alone or in small groups stalking around wetlands, lakes or garbage dumps as they search for prey. They have been known to attack and swallow whole wild ducks, mammals (including rodents), large fish, frogs, reptiles (including snakes), and large invertebrates.

When hunting in water, they will hold their open beaks underwater, waiting patiently until prey swims between the mandibles (upper and lower bill).

Greater Adjutants are mostly silent as they lack vocal muscles; however, they have been observed clattering their bills (males, in particular, as they advertise and protect their territories), and also making hissing and moaning sounds.