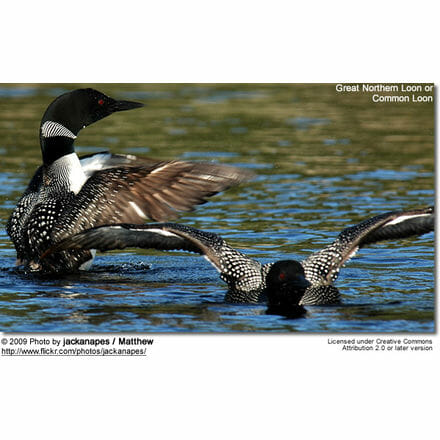 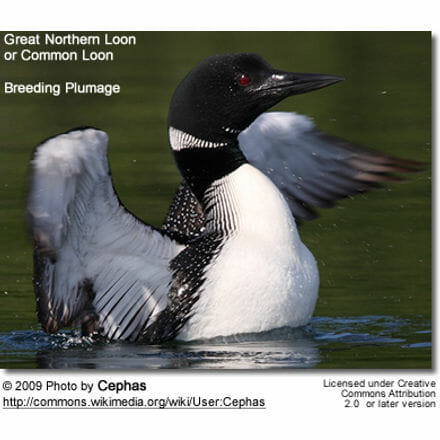 The species is known as a Common Loon in North America and the Great Northern Diver in Eurasia, its current name is a compromise proposed by the International Ornithological Committee.

Breeding adults have a black head, white underparts, and a checkered black-and-white mantle. Non-breeding plumage is brownish, with the chin and foreneck white. The bill is black-blue and held horizontally. The bill colour and angle distinguish this species from the similar Yellow-billed Loon. 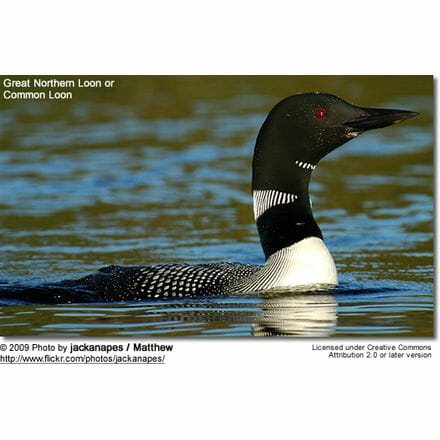 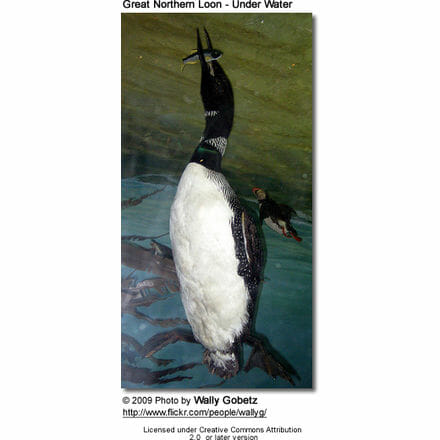 The Great Northern Loon breeds in Canada, parts of the northern United States, Greenland, and Alaska. There is a smaller population (ca. 3,000 pairs) in Iceland. On isolated occasions they have bred in the far north of Scotland.

This species winters on sea coasts or on large lakes over a much wider range in Europe and the British Isles as well as in North America.

The female lays 1 to 3 eggs on a hollowed-out mound of dirt and vegetation very close to water. Both parents build the nest, sit on the egg or eggs, and feed the young. 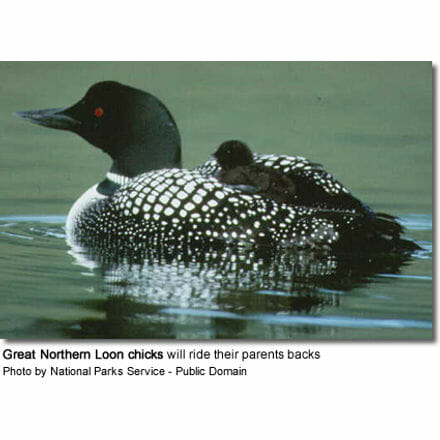 The bird needs a long distance to gain momentum for take-off, and is ungainly on landing. Its clumsiness on land is due to the legs being positioned at the rear of the body: this is ideal for diving but not well-suited for walking. When the birds land on water, they skim along on their bellies to slow down, rather than on their feet, as these are set too far back. The loon swims gracefully on the surface, dives as well as any flying bird, and flies competently for hundreds of kilometers in migration. It flies with its neck outstretched, usually calling a particular tremolo that can be used to identify a flying loon.

Great Northern Loon nests are usually placed on islands, where ground-based predators cannot normally access them. However, eggs and nestlings have been taken by gulls, corvids, raccoons, skunks, minks, foxes, snapping turtles and large fish. Adults are not regularly predated on, but have been taken by sea otters (when wintering) and bald eagles. Ospreys have been observed harassing divers, more likely out of kleptoparasitism than predation. When approached by a predator of either its nest or itself, divers sometimes attack the predator by rushing at it and attempting to impale it through the abdomen or the back of the head or neck.

These birds have disappeared from some lakes in eastern North America due to the effects of acid rain and pollution, as well as lead poisoning from fishing sinkers and mercury contamination from industrial waste. Artificial floating nesting platforms have been provided for loons in some lakes to reduce the impact of changing water levels due to dams and other human activities. 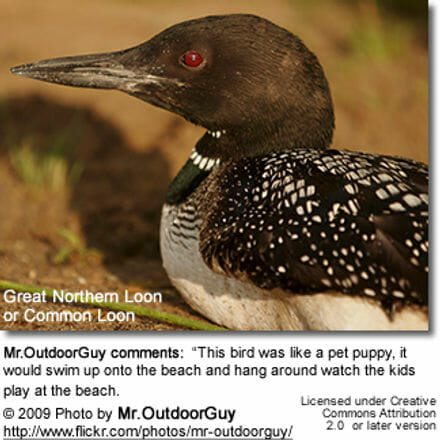 The Great Northern Loon is one of the species to which the Agreement on the Conservation of African-Eurasian Migratory Waterbirds (AEWA) applies.

This diver is well-known in Canada, appearing on the “loonie” coin and the previous series of $20 bill, and is the provincial bird of Ontario. Also, it is the state bird of Minnesota.

The voice and appearance of the Great Northern Loon has made it prominent in several Native American tales. These include a story of a loon which created the world in a Chippewa story; a Micmac saga describes Kwee-moo, the loon who was a special messenger of Glooscap, the tribal hero; native tribes of British Columbia believed that an excess of calls from this bird predicted rain, and even brought it; and the tale of the loon’s necklace was handed down in many versions among Pacific Coast peoples. Folk names include big loon, black-billed loon, call-up-a-storm, ember-goose, greenhead, guinea duck, imber diver, ring-necked loon, and walloon.

Gavia is Latin for “sea smew” (although divers are not Smew). The specific meaning of immer can be related to Swedish immer and emmer, the grey or blackened ashes of a fire, referring to its dark plumage; or to Latin immergo, to immerse, and immersus, submerged.