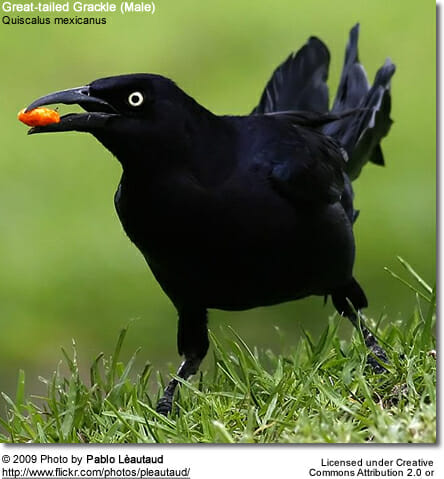 The Great-tailed Grackle (Quiscalus mexicanus) is a large icterid blackbird , also referred to simply as “blackbird”, and occasionally “crow” or “jackdaw”, though it is not a member of the Corvidae. Similarly, it is often called “cuervo” in areas of Mexico where there are no true crows.

Some species of Grackle, usually the Great-tailed, are confused with an American Crow when people unfamiliar with bird identification are asked to identify a dead blackbird. This usually occurs when birds need to be identified as candidates for West Nile virus.

Its habitat ranges from Kansas in the northeast and southern California in the west to northwest Peru and northwest Venezuela; the grackle’s range has been expanding north and west in recent years. It is common in Texas and Arizona in the southern regions.

It is commonly found in agricultural regions and suburban environments, feeding on fruits, seeds, and invertebrates (= animals without internal skeleton, such as insects, larvae, earthworms, millipedes, snails, spiders). 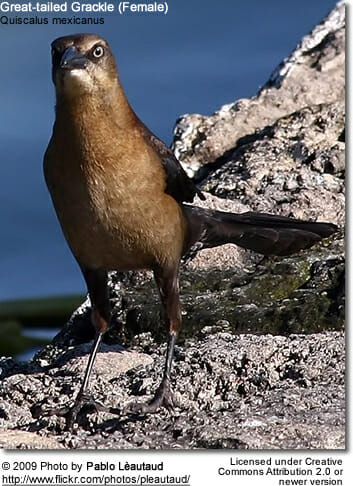 There is a considerable amount of sexual dimorphism (visual physical differences between the sexes) in this species.

Males reach up to 43 cm (18 inches), including a tail that is almost as long as the body, weigh 230 g, and are jet-black with a violet-blue iridescent sheen to the feathers.

Females are significantly smaller at 33 cm (13 inches), weigh 125 g, and are mainly brownish-black, with a pale brown throat and belly.

This bird has a large variety of raucous, cacophonous calls, and is widely considered to be a noisy pest species, though its range expansion has not been aided by human introduction (compared to the European Starling).