The Green-breasted Mango (Anthracothorax prevostii) – previously known as Prevost’s Mango – is a large hummingbird that is endemic to tropical America. They occur, for the most part, in Mexico and Central America, but vagrants (mostly juveniles) have also been observed in some areas of the United States.

The Green-breasted Mango and the Veraguan Mango (Anthracothorax veraguensis) were originally considered conspecific, but in 1983 the American Ornithologists’ Union (AOU) split these two species up, based on some physical differences and their different ranges.

Their natural range extends from eastern and southern Mexico south through Central America – including some islands along the coast – down to Costa Rica.

This species is partially migratory. The Green-breasted Mangos breed in northeastern Mexico from late February through September; and move south for the winter season.

In Mexico, they range from southern Tamaulipas (northeastern Mexico) and San Luis Potos (central Mexico) south to northern Oaxaca and Chiapas (southwestern Mexico), and in Veracruz and the Yucatan Peninsula (southeastern Mexico).

Additionally, they are found on some larger islands offshore, Hunting Cay off Belize, the Bay Islands off Honduras, and on Providencia and San Andre’s islands in the Caribbean Sea off Nicaragua.

United States: Immature birds are responsible for the majority of occurrences in the United States.

They mostly inhabit tropical deciduous forests in the tropical zone up to an elevation of 1,000 m (~3,300 ft). They are also found in open areas with scattered large trees, orchards, gardens as well as cultivated areas. Its distribution is often localized. 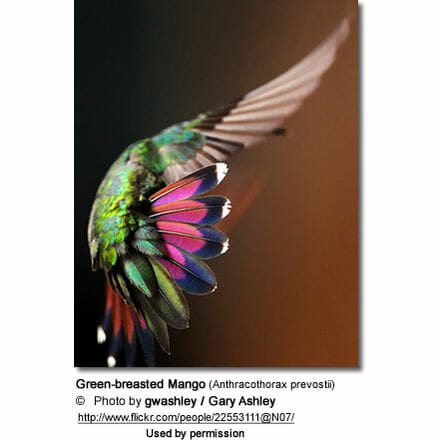 Most of its body is green, more yellowish brown on its flanks (sides) and vent. There is a broad blue area from its throat to below the chest – which may appear black in poor light conditions.

The adult male has glossy bright green upper plumage. His throat and chest have a relatively narrow matte black central area, bordered with blue-green. His flanks (sides) are bright green, and the black of the chest tapers onto the abdomen.

The female has a bronze-green upper plumage and a mostly white under plumage with a dark central stripe that changes from black at the chin to blue-green on the throat.

Like the females, immature birds also have a bronze-green upper plumage and mostly white under plumage with a dark central stripe that changes color from black at the chin to blue-green on the throat. Juveniles also have a distinctive black patch on the abdomen edged in white. They have some grey or buff feather edges on the head and wings, and are mottled with cinnamon to rusty brown along the edges of the white chest-belly stripe. Young females have less extensive magenta in the outer tail feathers than adult females or juvenile males.

The Green-breasted Mango also resembles the closely related Black-throated Mango. The male Green-breasted can mostly be differentiated by his less extensive black on the under plumage; however, under certain light conditions, his plumage appears all black – which makes identification difficult. Females of those two species look very much alike — the only difference being the more intense coppery tone of the upper plumage of the Green-breasted females. 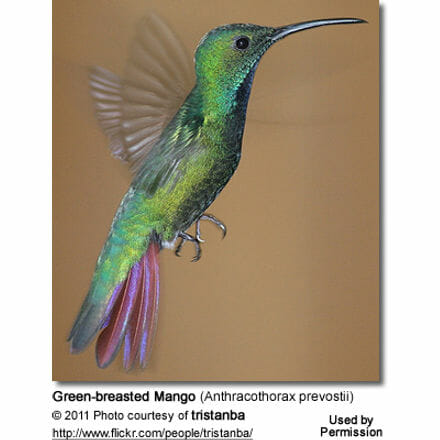 The Green-breasted Mangos primarily feed on nectar taken from a variety of brightly colored, scented small flowers of trees, herbs, shrubs and epiphytes. They favor flowers with the highest sugar content (often red-colored and tubular-shaped) and seek out, and aggressively protect, those areas containing flowers with high energy nectar. Their favorite nectar sources include the flowers of large trees, such as Inga, Erythrina, and Ceiba or kapok. 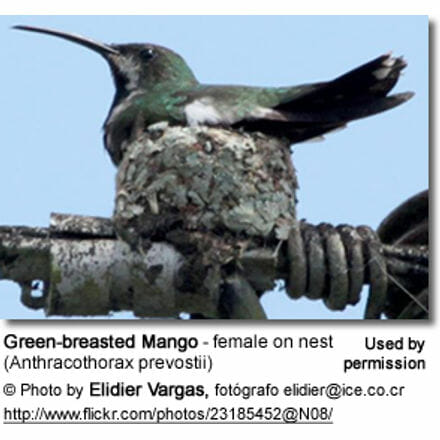 Hummingbirds are solitary in all aspects of life other than breeding; and the male’s only involvement in the reproductive process is the actual mating with the female.

They neither live nor migrate in flocks; and there is no pair bond for this species.

The female Green-breasted Mango is responsible for building the tiny cup-shaped nest out of plant fibers woven together and green moss on the outside for camouflage in a protected location in a shrub, bush or tree (or as can be seen on the image to the right – they may take advantage of man-made structures).

She lines the nest with soft plant fibers, animal hair and feather down, and strengthens the structure with spider webbing and other sticky material, giving it an elastic quality to allow it to stretch to double its size as the chicks grow and need more room. The nest is typically found on a low, skinny horizontal branch.

As is the case with other hummingbird species, the chicks are brooded only the first week or two, and left alone even on cooler nights after about 12 days – probably due to the small nest size. The chicks leave the nest when they are about 24 days old.

Their nests have been observed on trees that were beset with Pseudomyrmex stinging ants. It is possible that these hummingbirds deliberately select such trees for nesting in order to deter predators. 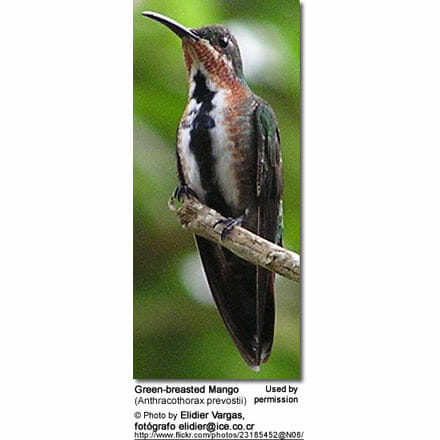 Internationally, this hummingbird is known as: