The Green Peafowl, Pavo muticus – also known as Dragonbird – is a large pheasant. It is one of two species in the genus Pavo., the other being the Blue or Indian Peafowl, commonly known as the Peacock.

Green Peafowl are powerful flyers that cover long distances as they travel from their deep forest roost to feeding sites in marsh pastures and along river banks.

This is a colorful pheasant and is sometimes considered the most beautiful member of its family.

He has a green tufted crest, different in shape to the fanned crest of the Blue and an iridescent metallic green color plumage with scaly appearance on its neck, breast and mantle.

His emerald green tail feathers have a series of eyes that are best seen when fanned. 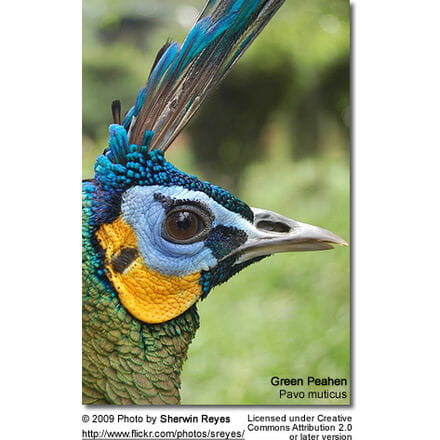 The Green Peafowl is a forest bird which nests on the ground laying 3 to 6 eggs.

Their natural diet consists mainly of seeds, insects, reptiles, fruits and small animals. It is often called the Dragonbird because it hunts venomous snakes.

There are three subspecies of the Green Peafowl:

Some taxonomists believe that the endangered Green Peafowl is actually a complex of five distinct species although they are currently treated as one species with three subspecies.

Status in the Wild :

Due to hunting and a reduction in extent and quality of habitat, the Green Peafowl is evaluated as Vulnerable on the IUCN Red List of Threatened Species. It is listed on Appendix II of CITES.