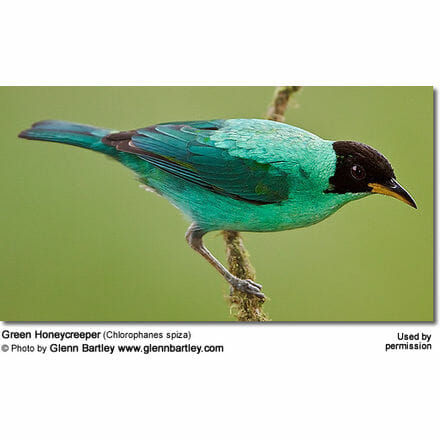 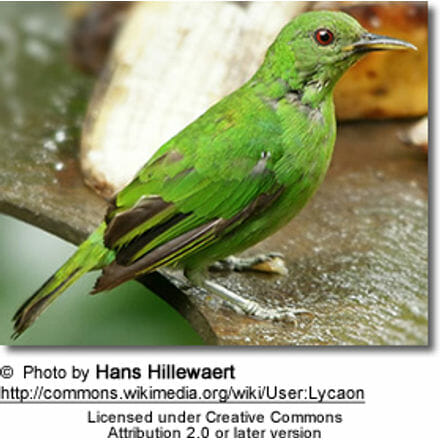 The Green Honeycreeper (Chlorophanes spiza) is a small tanager that occurs naturally from southern Mexico south to Brazil – where they are known as Saí-verde. They are also established on the island of Trinidad.

This songbird inhabits dense forest and secondary woodland areas – typically remaining high in the canopy, but may descend along forest edges, in clearings with scattered trees and shrubs, or in gardens.

The Green Honeycreeper averages 13-14 cm (5-5.5 in) in length and weighs between 14 to 23 grams. It has a long, sharply pointed, black and yellow, decurved beak.

Males and females are easily identified.

The male is mostly a glossy blue-tinged green, with some of the wing feathers, edgings on wings and tail being somewhat darker. He has a black head and a mostly bright yellow bill. His legs are greyish and his eyes are brick-red – redder than those of the female.

The female Green Honeycreeper’s plumage is mostly apple-green with darker wings. She is paler on the throat and her lower plumage is yellowish green. She lacks the male’s iridescence and black head. Her eyes are reddish-brown.

The juvenile’s plumage is grass green, paler on the throat, and they lack the black head of the adult male. They have a shorter beak and don’t have the yellow lower beak that can be seen in the adult.

Similar Species: The female can get confused with Blue Dacnis; however the beak is different and they also lack the blue color on top of the head. 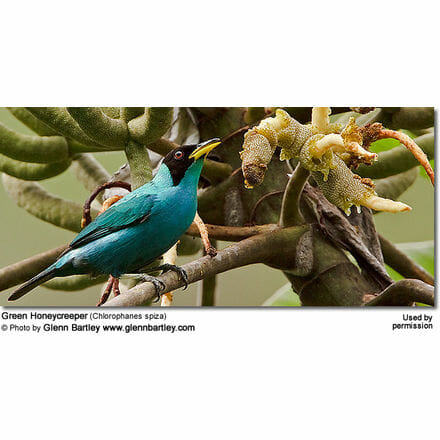 The Green Honeycreeper’s main diet consists of fruit (~60%), nectar from flowers (~20%) and insects (~15%). During the breeding season, the percentage of insects in their diet goes up as they require higher levels of protein during that time.

The Green Honeycreeper generally forages around fruiting trees, eating fruit whole on a perched position; while insects are usually taken in flight (ffrench 1991).

The breeding season generally starts in April and goes on until July. The female Green Honeycreeper is responsible for building the small shallow cup nest composed mostly of dead leaves, tendrils, fungal filament, and rootlets and lined with finer material (ffrench 1991, Stiles and Skutch 1989).

The nest is typically situated 1.5 to 12 m up in a tree or bush. She usually lays 2 white eggs with dark brown spots that measure 19.6 by 13.6 millimeters (ffrench 1991) . She alone incubates them for about 13 days. However, the male assists in raising the chicks.

Its call is described as a sharp chip.