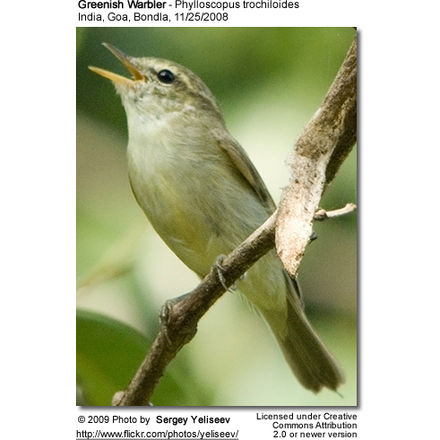 The Greenish Warbler, Phylloscopus trochiloides, is a widespread leaf-warbler throughout its breeding range in northeast Europe and northern Asia.

This warbler is strongly migratory and winters in India.

This species occurs as a spring or early autumn vagrant in western Europe and is annual in Great Britain.

It breeds in lowland deciduous or mixed forest. The nest is on the ground in low shrub.

This is a typical leaf-warbler in appearance, greyish-green above and off-white below. Its single wing bar distinguishes it from most similar species, except Arctic Warbler, Phylloscopus borealis. It is slightly smaller than that species and has a thinner bill, without a dark tip to the lower beak.

Its song is a high jerky trill.

Like all leaf-warblers, it was formerly placed in the “pan-Sylviidae” assemblage, but now belongs to the new leaf-warbler family Phylloscopidae (Alström et al. 2006). It has a number of subspecies, of which P. t . viridianus is the most familiar in Europe (Snow et al. 1998). This is due to its evolution as a ring species, with populations evolving to the East and West of a plateau, later meeting on the other side, by which time there are two species. Their relationships are therefore fairly confusing (see Alström 2006): 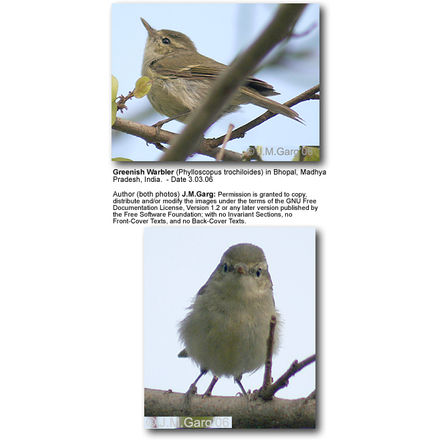 P. t. plumbeitarsus is often split as distinct species, but phylogenetically, the western taxa are even more distinct.

Another approach to the systematics of this complex is to consider it a ring species. The groups’ origin lies probably in the Himalayan region, where trochiloides is found. This taxon is close to the parapatric obscuratus and plumbeitarsus which is geographically separated from obscuratus.

On the other hand, there is some gene flow between trochiloides and the more distinct viridianus also, with their hybrids being especially common in Baltistan and once considered a subspecies ludlowi. On the other hand, viridianus whereas the latter and plumbeitarsus do not hybridize in the narrow zone in the western Sayan Mountains where their ranges overlap. nitidus is a mountain isolate that diverged from ancestral viridianus.

Song structure differs mainly between trochiloides and plumbeitarsus. The former has a fairly uniform, long, and warbling song. Around the Himalayas, song structure is similar, but songs are generally shorter. plumbeitarsus, on the other hand, has a long song that can be clearly divided into a warbling part, followed by series of up- and downslurred notes. The songs of obscuratus, and, interestingly, “ludlowi”, are short, but contain the downslur elements too; in the latter, they uniquely appear at the start of the song.(Irwin 2000)