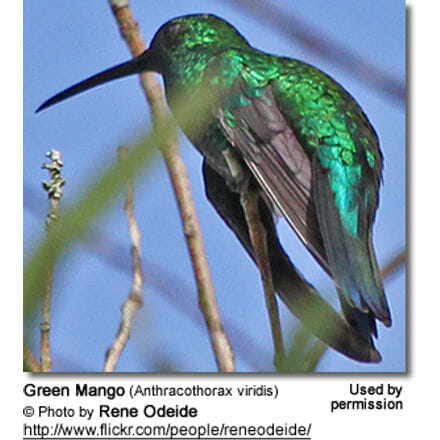 The Green or Puerto Rican Mango (Anthracothorax viridis) is a large hummingbird that occurs naturally on the island of Puerto RicoPuerto Rico and adjacent islands. This species is often found in forests and along forest edges, on coffee and other kind of plantations in the island’s central and western mountain corridor and its foothills. They are also occasionally found along the southwestern coast.

The Green Mango is one of nine hummingbird species found in Puerto RicoPuerto Rico. 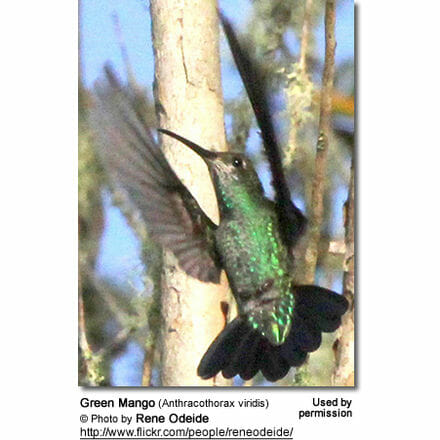 The upper plumage is glossy emerald green, bronze-green or occasional bronze; the plumage below is metallic bluish-green. The wings are a dusky brownish slate, faintly glossed with violet. The dark rounded tail is metallic blue-black or dark steel blue. The under tail feathers are sometimes narrowly whitish-tipped.

Juvenile birds look like adults, but may have darker and duller underparts or have narrow pale grey-brown edging to the feathers of the under plumage. 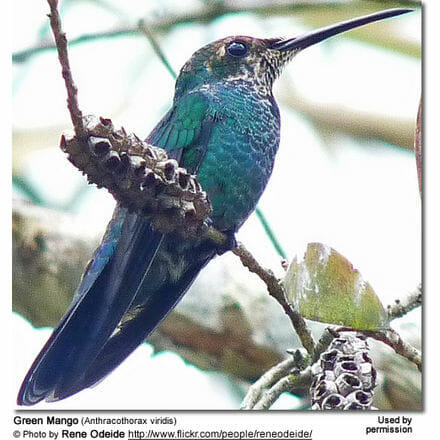 Hummingbirds in general are solitary and neither live nor migrate in flocks; and there is no pair bond for this species – the male’s only involvement in the reproductive process is the actual mating with the female and, in the case of the Green Mango males, standing guard close to the nest. Males court females by flying in a u-shaped pattern in front of them. He will separate from the female immediately after copulation. One male may mate with several females. In all likelihood, the female will also mate with several males. The males do not participate in choosing the nest location, building the nest or raising the chicks.

The average clutch consists of two white eggs, which she incubates alone, while the male defends his territory and the flowers he feeds on. The young are born blind, immobile and without any down. The female feeds the chicks with regurgitated food (mostly insects since nectar is an insufficient source of protein for the growing chicks). The chicks leave the nest when they are about 20 days old. 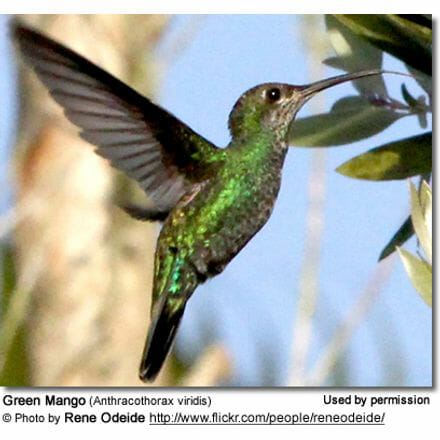 Theyprimarily feed on nectar taken from a variety of brightly colored, scented small flowers of trees, herbs, shrubs and epiphytes..They favor flowers with the highest sugar content (often red-colored and tubular-shaped) and seek out, and aggressively protect, those areas containing flowers with high energy nectar. This hummingbird is particularly fond of the Heliconia flowers. They use their long, extendible, straw-like tongues to retrieve the nectar while hovering with their tails cocked upward as they are licking at the nectar up to 13 times per second. Sometimes they may be seen hanging on the flower while feeding. They will sometimes pierce the flower below the stamen to obtain nectar.