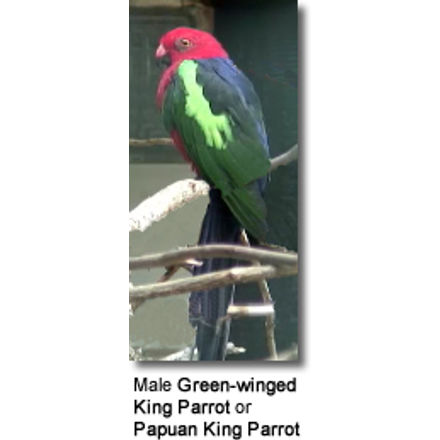 This Genus has occasionally been lumped with the Red-winged Parrots (Aprosmictus). It forms a super-species with the Amboina or Amboyna King (Alisterus amboinensis).

Adults of both sexes are very majestic birds, typically 36 cm (14 inches) in length, including the long tail.

The adult males (older than 4 years) are very striking in appearance. Their plumage is mostly red. They have a variable blue band on the nape and upper back. The back and shoulder feathers are greenish-black. They have a pale yellowish-green band on the wing-coverts (not yellow as occasionally wrongly described – this band is a darker – a medium green in the subspecies). The remainder of the wing is dark green. The lower back, the upper tail-coverts and the rump is blue. The under tail-coverts are scarlet with a dark blue base. The upperside of the tail is black strongly tinged with blue. The tail underside is greyish-black.

They have a reddish-orange upper beak with a black tip and a black lower beak. The irises are orange and the feet are grey.

Females are similar in appearance except for a green head, breast, back, wings and under wing coverts. Her breast feathers are edged with brownish-red. They lack the paler shoulder feathers that can be seen in the male. The upper tail is green with black tips. The base of the bill is more brownish than in the male.

Juveniles of both sexes resemble the females. Young females have less red on abdomen and lower breast; bill brownish-black and their irises of the young are dark.

Their natural diet consists of seeds, particularly eucalypts and acacias. But they also feed on a great variety of other plants.

Their calls are shrill and metallic, which they repeat when in flight or alarmed. While perching, they emit high-pitched, metallic upslurred notes.

In their native Australia, they are occasionally bred in aviaries and kept as calm and relatively quiet household pets if hand-raised, but are relatively unknown outside Australia. As pets, they have limited “talking” ability and normally prefer not to be handled, but do bond readily to people and can be very devoted.

Life expectancy in the wild is unknown, but some pets have been known to live up to 25 years.

King Parrots are not only incredibly beautiful, but also quiet (except for the occasional shrill sentinel call) and gentle in nature. They are quite different from other parrot species that tend to be noisier, more destructive and more aggressive than they tend to be.

Even a young bird that has not been neglected and abused requires proper guidance; this becomes even more challenging when it involves a rescued bird that may require rehabilitation. If they feel cornered, some biting may occur.

If you are considering a king parrot as a pet, the following web resources might be of interest: