The Green-winged Teal (Anas carolinensis) is a strongly migratory duck found in the northern areas of North America (except the Aleutian Islands). This species is common and widespread within its natural range.

The Green-winged Teal is the smallest of all North American dabbling ducks.

The breeding male has grey flanks and back, a yellow rear end and a white-edged green speculum (= distinctive wing patch) that is mostly visible in in flight or when at rest. He has a chestnut head with green eye patches.

The females have a light brown plumage.

The breeding male resembles the male Common Teal, but can be identified by the vertical white stripe on the side of his chest, the lack of both a horizontal white scapular (wing) stripe and the lack of thin buff lines on his head.

Females resemble the female Mallard, but can be identified from most ducks by her smaller size and the wingpatch. She can’t easily be distinguished from the female Common Teal. 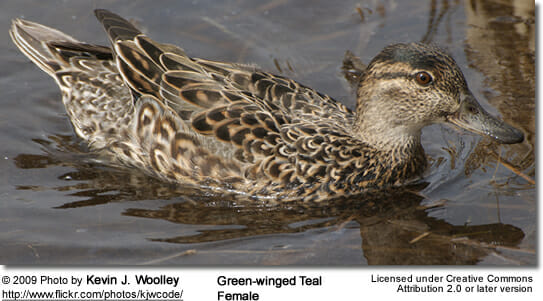 Teals usually feed by dabbling, upending (feeding upside down in water) or grazing on land. They may submerge the head and on occasion even dive to reach food. In the breeding season it eats mainly aquatic invertebrates, such as crustaceans, insects and their larvae, mollusks and worms. In winter, it shifts to a largely granivorous diet, feeding on seeds of aquatic plants and grasses, including sedges and grains. Diurnal throughout the breeding season, in winter they are often crepuscular or even nocturnal feeders.