The Grey Goshawk (Accipiter novaehollandiae) – also known as Variable Goshawk – is a solitary hawk that occurs naturally in eastern, southeastern and northern parts of Australia.

The white morph (genetic mutation) is known as the White Goshawk. The white form is the only pure white bird of prey in the world.

The Grey Goshawk inhabits tall, wet forests in eastern and southeastern Australia and riverine forests in northern parts of Australia.

In Australia, its range stretches along the coastal areas (including coastal islands) from the Kimberley Mountains in northwestern Australia, across the entire northernmost parts of Australia, south to the most southern tip of Australia to Adelaide, the capital of Victoria. They also occur in western Tasmania.

The white morph is mostly found in the open forests of northwestern Australia as well as coastal Victoria. It is the only form found in Tasmania.

The grey morph is more common along the Australian eastern coast, where it lives in thicker, sub-tropical forests.

It is also found in the Lesser Sunda Islands, Moluccas, New Guinea and the Solomon Islands.

In New Guinea and the islands, they mostly live in dense jungle, both in mountains and near the coast. They may also be found in villages and gardens.

The Grey Goshawks are non-migratory; however, young birds may disperse widely into new territories.

They are often observed making short flights and gliding between trees or soaring with shallow wing beats over the canopy (Olsen 1995). 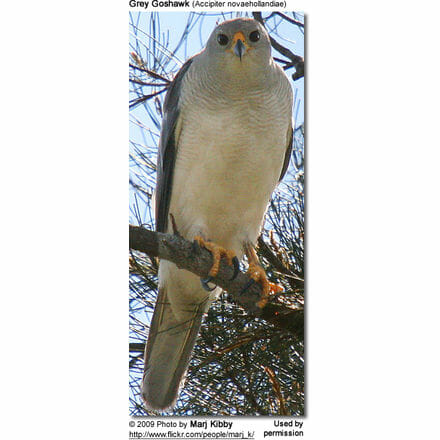 This Goshawk comes in so many racial variations in terms of size and color that some refer to it as the “Variable Goshawk.”

There are two color forms, or “phases”:

The grey morph Grey Goshhawk has a pale grey head and upper plumage and white under plumage, barred grey on the chest and tail. The “chin” is white, and the sides of the face and the neck are pale grey. The rounded wings and the medium-length tail are white below and grey above. The eyes are red, and the cere (skin above the bill) and the legs are yellow.

Grey-phase Goshawks are mostly found in the center portion of Australia, and along the eastern coast.

Immature birds have brown eyes that turn reddish when they are about two months old. The cere and feet are yellow.

Grey-phase juveniles have a greyer plumage and are more heavily barred below.

The White Goshawks could not be confused with any other bird, except maybe the white cockatoo (from a distance).

The Grey Goshawk looks similar to the Collared Sparrow-hawk and the lighter northern form of the Brown Goshawk, with which they share a range, but it has a rounder tail and more uniform brown coloration below and less clearly defined chest barrings.

The Grey Goshawk resembles the Grey Falcon – however, this species has pointed, dark-tipped wings. 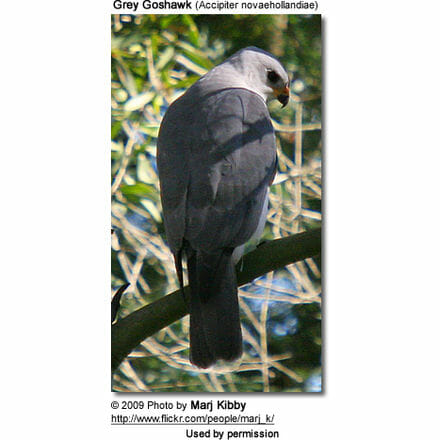 Grey Goshawks feed on birds (up to the size of herons), reptiles (including snakes), small mammals – such as bats, possums and rabbits; as well as insects, including grasshoppers, beetles and cicadas. Rarely, they may accept carrion.

The larger females can catch larger prey than males. Males tend to take more birds, while the females feed more on mammals and reptiles.

Grey Goshawks rely heavily on the element of surprise to catch their prey. They will hide in the canopy or bushes and attack prey in the open or inside the cover.

These bold hunters will also pursue their prey before catching them with their long, powerful claws (talons).

Birds and bats are caught mid-air or on the ground.

Mammals, reptiles and insects are usually picked off the ground or from tree branches.

The breeding season varies depending on the location. In the south, most breeding occurs between July and December; and in the north usually between January and May.

Grey and White Goshawks interbreed freely; on rare occasions, they may also hybridize with Brown Goshawks.

Grey Goshawks mate for life and together defend their home territory year round. They are solitary nesters.

The pair constructs the nest together out of sticks and twigs with a central depression lined with leaves. The nest is usually situated high in a tree fork up to 60 feet (18 m) above the ground. They usually reuse the same nest, and repair the nest as necessary. The construction or repair of the nest may take six weeks up to two months.

The average clutch consists of 2 -3 eggs, occasionally 4. The female does most of the incubation – although the male will relieve her as necessary. The young hatch after about 30 – 35 days. Most hatchlings are covered in white down; although in Australia, the down may be grey.

The male does most of the hunting and brings the prey to the nest. The female breaks the prey up into smaller pieces before feeding it to the chicks.

The chicks fledge when they are about 30 – 40 days old, and are independent about six weeks later. 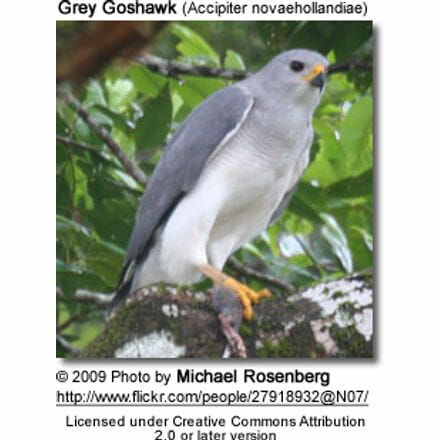 The females’ calls are described as slower and mellower.

Most vocalizations made during the breeding season.