The Grey Herons (Ardea cinerea) – also known as Common Herons or “Cranes” in Ireland – are wading birds with an extensive geographic range which extends throughout temperate Europe and Asia, and parts of Africa. In Europe, they are the largest herons.

They are related and resemble the North American Great Blue Herons and the South American Cocoi Herons or White-necked Herons – both of which are slightly larger in size. Since their ranges don’t overlap – with the exception of some occasional vagrants – confusion is unlikely for the most part. The Great Blue Heron can be identified by their chestnut-brown flanks and thighs, and the Cocoi Heron has more extensive black markings on the head than the other two.

The Australian White-faced Herons are often incorrectly referred to as Grey Herons, leading to confusion with the European species. 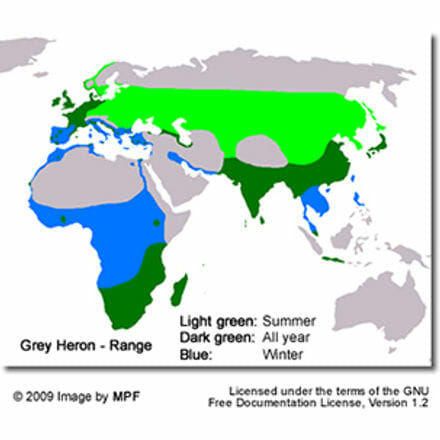 These herons are not sociable and, outside the breeding season, are usually seen alone. They show aggression towards other birds by performing snake-like stabbing motions with their head and raising their crests.

Grey Herons occur throughout most of temperate Europe (where they are common and widespread throughout Great Britain and Ireland), and their range extends through Russia as far east as Japan; and south through China to India. They are also found in parts of Africa and in Madagascar.

Vagrants have been reported in North America, Greenland and Australia.

These Herons are partially migratory. Those breeding in areas with icy winters will often retreat to warmer regions, with some traveling great distances to get to and from their breeding territories.

They mostly inhabit freshwater habitats, such as rivers, lakes, ponds and reservoirs and marshes, as well as saltwater or brackish inlets and estuaries.

As suggested by their common names, the upper plumage is predominantly grey – including the back, wings and most of the neck. The plumage below is off-white.

The head is white with a broad black “eyebrow” (supercilium) and long black feathers that extend from the eyes to the beginning of the neck, forming a crest.

The strong, dagger-like bill and the legs are yellowish in non-breeding adults, turning deep orangey / reddish in breeding birds.

They fly with their long necks retracted (S-shaped), and the broad, arched wings and their long legs trailing behind them are distinctive. Their flight is described as slow. Males and females look alike; except females are generally smaller.

Juveniles have dull grey heads with dark grey crown feathers that they retain into their first winter, after which they begin to develop the white forehead and black head crest of the adult.

Its large size, combined with the pale grey plumage and distinctive shape distinguish the Grey Heron from all other birds.

Grey Herons are larger than other herons, which are often half their size. Grey Herons mostly feed on fish, frogs and insects; but they also may take reptiles, small mammals, and small birds, such as ducklings, tern chicks, young and adult snipes, plovers and the nestlings of warblers. The largest birds these herons are recorded to have attempted to feed on are White-throated Rails.

They mostly hunt in shallow water – either by patiently standing completely still in or at the side of water waiting for prey, or slowly stalking it, and then striking rapidly when it comes into range either by catching it in the bill or spearing it. Prey is often swallowed whole.

They usually protect their feeding territorious against intruders.

They have also adapted well to urban environments, where the visit street markets and snackbars (as recorded in Amsterdam, Netherlands). They also visit the zoo during those times when the pelicans, seals and penguins are fed; or accept offerings from individuals or commercial fishermen.

Grey Herons breed either solitary or in colonies – known as heronries – in trees close to bodies of water, such as lakes, the seashore or other wetlands, or in reedbeds. They are generally loyal to their breeding sites, returning to them year after year, including successive generations.

At the beginning of the breeding season, males select nesting sites. Depending on the situation, the following may happen:

Bonded pairs will perform greetings ceremonies whenever one or other arrives at the nest, which involves raising and lowering of the wings and their plumes.

Pairs generally remain together throughout the breeding season. Most nesting activities are observed between February to early June.

The bulky platform nests are constructed out of branches, sticks, grasses and other material the males could gather; and these nests sometimes measure 3 feet or 1 meter across. They are placed in the crowns of tall trees, but have also been reported in dense undergrowth and occasionally on bare ground. These nests are often reused in following seasons, or subsequent nests built upon those of previous years. The size of the nest is an important consideration for females, who favor larger nests, and males will fiercely defend those nests.

There are great variations as far as the size of the clutch is concerned – as few as one or as many as 10 have been reported in a nest. This will largely depend on how favorable the environmental conditions are for raising young. Most nests contain 4 – 5 light blue-green eggs. The parents take turn incubating the eggs for 25 – 26 days to hatching.

The hatchlings are covered in down and are being taken care of by both parents who protect and feed them regurgitated fish. The loud clicking calls of the hungry young are heard throughout the day. Initially, the parents will feed them directly by regurgitating into their bills, and later, they will regurgitate food onto the nest and the chicks compete for the food, and may push others out of the nest or even cannibalize deceased nest mates.

The chicks leave the nest when they are 50 days old, but will still remain close to their parents until they are self-sufficient and independent, a few weeks later . They reach reproductive maturity when they are about one year old (the following breeding season).

These herons usually only produce one clutch a year; however, they may replace lost broods.

Their call is described as a loud croaking “fraaank“.

The oldest recorded Grey Heron lived 23 years and 9 months. However, the average life expectancy of these birds in the wild is only about 5 years. The mortality is highest during the first year, when 67% of all birds die for various reasons, but most of them com/fall victim to predation. In the second year, the mortality rate declines nearly 30% and continues to fall thereafter.