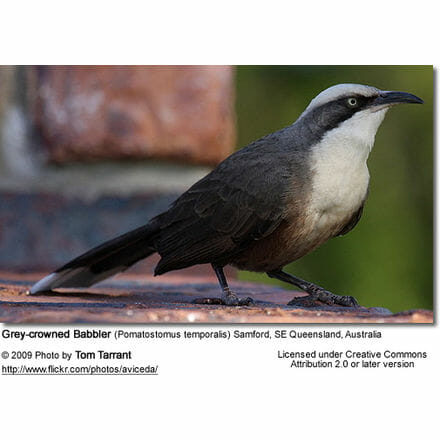 Two subspecies are recognised within Australia[1][2] and New Guinea.[2]

Pomatostomus temporalis temporalis – This subspecies occurs within Australia in the states of Victoria, eastern Queensland (including Cape York), New South Wales and south-eastern South Australia.[2][1] It is a vagrant or accidental visitor to the Australian Capital Territory.[1] It is also the subspecies believed to occur within New Guinea.[2]

Pomoatostomus temporalis rubeculus – This subspecies occurs in Australia within the states of Western Australia, Northern Territory, western Queensland and a small area of northern South Australia.[2][1]

The breast color is usually used as the distinguishing morphological character between the subspecies, with a creamy white breast grading to mid-grey in P. t. temporalis and a mid to deep rufous brown breast in P. t. rubeculus.[2] Other differences relate to brow coloration, facial bands through the eye, tail length and overall size.[2] A zone of intergradation occurs between the two subspecies in north-central Queensland.[2]

A number of alternate names have been provided for the Grey-crowned Babbler.

There are numerous lists of threatened fauna from within Australia. The official list of threatened species on the Australian Environment Protection and Biodiversity Conservation Act 1999 does not consider the Grey-crowned Babbler (either as a species or subspecies) to be threatened.

From other sources, the national status of the Grey-crowned Babbler varies. The eastern subspecies is increasingly being considered threatened, although not by all:

The conservation status of the Grey-crowned Babbler varies from state to state within Australia. For example:

The key process that has led to the decline of the eastern subspecies of the Grey-crowned Babbler has been the historic loss and fragmentation of its preferred woodland habitat.[4] Grey-crowned Babblers generally have a poor ability to immigrate across unsuitable habitats. As a consequence of fragmentation, breeding success and groups sizes decline. Babbler groups are more susceptible to stochastic events leading to local extinction from a fragment. Once a fragment has lost its population of Grey-crowned Babblers, natural recolonisation rarely occurs because of its poor dispersal ability.