The Guianan Toucanets or Guyana Toucanets (Selenidera culik or Selenidera piperivora) are toucans found in the lowland forests of northwestern Brazil (north of the Amazon – from the lower Negro River east to eastern Amapá) north to the French Guiana, Guyana, Suriname and extreme southeastern Venezuela.

Within their range, these toucans are quite common.

They are also one of the most successfully bred toucan species in captivity, and are commonly found in zoos and private collections. Here in the United States, the first birds were bred by Jerry Jennings in 1990. These friendly and affectionate birds are in demand as pets.

They are expected to live about 20 years.

They are closely related to the Central American Yellow-eared Toucanets (Selenidera spectabilis).

Males have black heads and chests; and females have grey chests, black crowns, and chestnut napes (back of the neck).

Both genders have yellow ear patches, and large, red and black-colored beaks that are about 3 inches or 7.62 centimeters long. The eyes are red surrounded by blue skin. 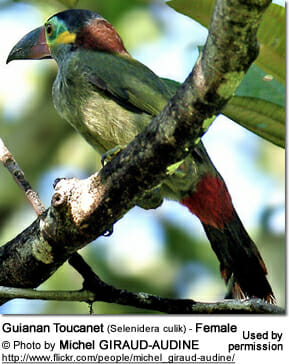 The nests are not lined, but the two to four shiny white eggs (mostly 3 – 4) that are laid each breeding season rest on a few wood chips created while enlarging the opening or on various kinds of regurgitated seeds collected for this purpose.

Parents share equally in incubation duties, which lasts about 16 days. However, they rarely sit on the nest for more than an hour at a time and the eggs are often left uncovered.

After 16 days the nestlings are born blind, with no trace of down on their pink skin. Both parents share in feeding fruit to the young. The young fledge (leave the nest) when they are about 40 – 42 days old.

The bill is unremarkable until about 16 days old when it takes on the distinguishing features of the toucan, and requires up to four months to develop fully. Feathers begin to expand at 4 weeks.