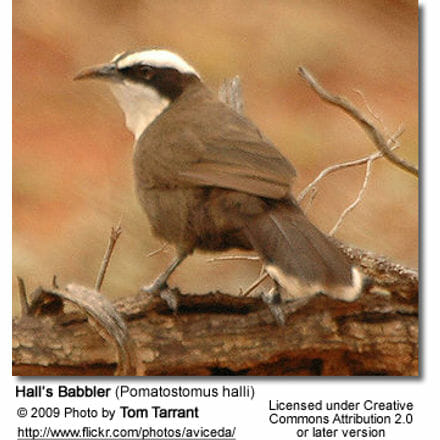 The Hall’s Babblers (Pomatostomus halli) – also known as White-throated Babblers – are endemic to Australia. This species was only identified in 1964 and very little is known about them. Until then, they were lumped together with the superficially similar White-browed Babbler.

Their common name “Babbler” is likely derived from the habit of constantly calling to each other while foraging.

The Hall’s Babblers occur in inland, central-eastern Australia, where their range stretches from central and western Queensland (south of the Finucane Range and east to the Forsyth Range) south to northwestern New South Wales.

Their range stretches as far north as Winton and Boulia; west to McGregor and Grey Ranges, and south to about Mootwingee and Brewarrina. The eastern boundary is believed to be the Idalia National Park and the town of Cunnamulla.

They are believed to be sedentary, occurring in very localized patches.

These Babblers favor tall, dry Acacia shrublands, mostly Mulga. However, they are also found in other arid woodlands and shrublands, such as open dry Eucalyptus (Bimblebox) woodland, and mulga- or eucalypt-lined watercourses.

Hall’s Babblers are thought to be sedentary or locally nomadic. These noisy birds are frequently observed in flocks of up to 20 individuals.

The plumage is mostly dark blackish brown, with very white “eyebrows” and a conspicuous white “bib” that extends down to the mid-chest and white tail tips.

The bill is grey-black and curves down. The eyes range from red brown to dark brown. The legs and feet are black.

The Grey-crowned Babbler (Pomatostomus temporalis) is larger in size and its eyebrows fade into a grey crown.

Hall’s Babblers mostly feed on the ground in grassy areas, but will also pick insects from trunks and branches, and turn over stones as they forage. They mostly feed on insects, such as beetle pupae and caterpillars, as well as on spiders and seeds. Large food items are often shared between two or more birds.

During the breeding season breeding pairs and one or more “helpers” separate from flocks as they get ready to reproduce and raise young. They construct several nests out of twigs – each one with a domed roof and a side entrance hole. Some of these nests may be used for roosting. Only one will be used to raise the young in.

The nests are placed in shrubs or in the upright forks of trees (often acacias, in mulgas and Casuarina) or in horizontal eucalypt branches about 10 – 33 feet (3-10 meters) above the ground. Only one bird, believed to be the female, incubates the eggs. All the others are likely involved in protecting and feeding the young.

er each breeding season, and repair and sanitize before reusing.