It reaches east Uganda at mounts Elgon, Moroto, and Morongole.highlands in Kenya extending into north Tanzania at Loliondo. 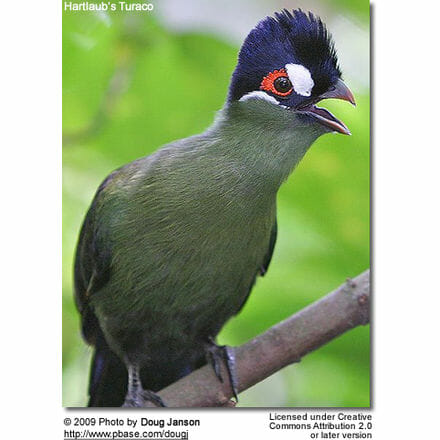 Its preferred habitat includes evergreen montane forests between 4,550 and 10,500 ft (1,400–3,250 m), as well as frequenting well-timbered suburban parks and gardens around Nairobi and other central Kenyan towns.

Although fairly common in Kenya, the northern Tanzanian population has been seriously impacted by years of indiscriminate trapping and export, resulting in high mortality and diminishing populations in several areas.

These turacos are typically in pairs or family groups, congregating in groups of up to 20 individuals at favored fruiting trees. In many areas pairs defend a core territory year round, and each day work a well-defined feeding route within territorial boundaries. 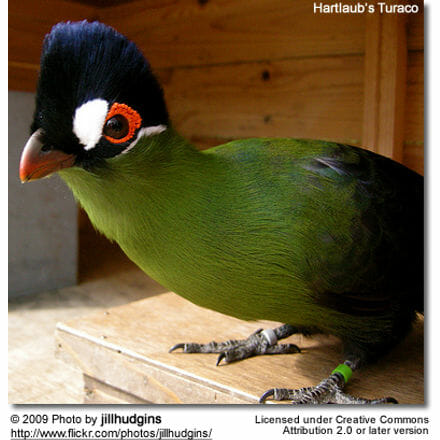 The Hartlaub’s Turaco is a dark iridescent green turaco, with a prominent, white “comma” before the eye, and brilliant red primaries (longest wing feathers) that are particularly conspicuous in flight.

It features a rounded bushy crest and nape glossy blue-black. Chin, cheeks, neck, mantle, throat and breast are dark green. Its lower back, folded wings, and tail are deep violet blue. The thighs and belly are dull blackish washed with green.

The prominent white patch in front of the eye separated from a white line extending from gape to ear coverts (feathers covering the ears) by a black loral patch (= loral area is the area between beak and eyes) and narrow black line immediately below the eye. The orbital ring and bare skin behind the eye are red.

Juveniles are similar to adults but duller and with less red in the primaries (longest wing feathers).

Flight appears weak and labored with much flapping and gliding, and generally for only short distances. 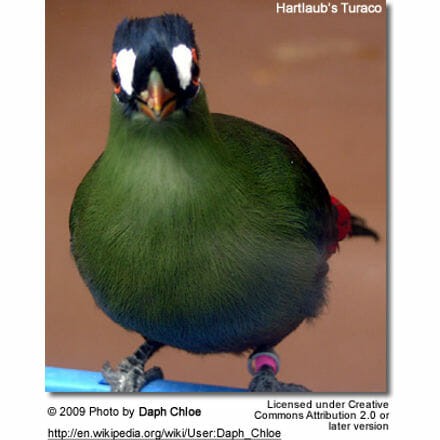 Courtship displays by the male are noisy and involve much fanning and jerking of the tail, raising and lowering of the crest, and half opening of the wings to display crimson flight feathers. Once the pair bond is established, the pair engages in frequent bill rubbing, and the male offers food to the female at frequent intervals.

Two rounded dull white eggs are laid in a shallow platform of loosely interlaced twigs, some 7–25 ft (2.5–8 m) above ground, and generally among thick tree foliage. Incubation is by both sexes for 22–23 days.

Newly hatched chicks are covered in black down, and for the first few days are fed on regurgitated caterpillars and fruit pulp. At 17–18 days the nestlings are able to climb all over the nest tree, rarely being in the nest itself, and are able to make their first flight at around 28 days.

The Hartlaub’s Turaco mostly feeds on fruits, plant matter, and berries, but will also consume flowers, caterpillars, moths, arthropods and beetles. They appear to be particularly attracted to black or dark red fruits, and captive birds readily accept black grapes. 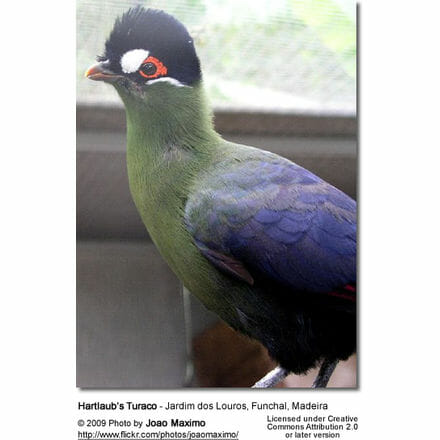 This turaco is a popular cage bird and large numbers of them can be found in zoos and aviaries in the United Kingdom, Europe, North America, Mexico, and the Far East

Its lower cost than other species in the past made it popular with aviculturists, but breeding results have been relatively poor. Of all the turacos maintained in captivity, the Hartlaub’s Turaco is the best known for its male aggression to females (and occasionally vice-versa), making it an challenging species to keep. However, patience, perseverance and seasonal segregation can be effective

Keeping and Breeding the Turaco