The Helmeted Guineafowl (Numida meleagris) is the best known of the guineafowl bird family, Numididae, and the only member of the genus Numida.

It breeds in Africa, mainly south of the Sahara, and has been widely introduced into the West Indies and southern France.

It breeds in warm, fairly dry and open habitats with scattered shrubs and trees such as savanna or farmland.

These guineafowl live as long as 12 years in the wild.

In the early days of the European colonisation of North America, the native Wild Turkey (Meleagris gallopavo) was confused with this species. This led to the English name of the American bird, since Turkey and Guinea were equally far-off and exotic places.

The word meleagris, Greek for guineafowl, is also shared in the scientific names of the two species, although for the guineafowl it is the species name, whereas for the turkey, it is the name of the genus and (in an altered state) the family.

It lays its large clutch of 20-30 eggs in a well-hidden lined scrape, and the females incubate the eggs for 26-28 days.

The chicks are cryptically colored and rapid wing growth enables them to flutter onto low branches barely a week after hatching. 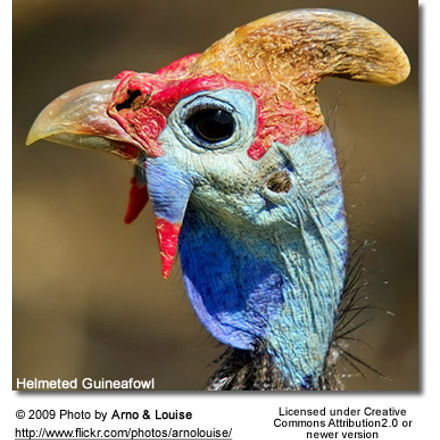 The Helmeted Guineafowl is a large (53-58 cm) bird with a round body and small head.

They weigh about 1.3 kg. The body plumage is gray-black spangled with white. Like other guineafowl, this species has an unfeathered head, in this case decorated with a dull yellow or reddish bony knob, and red and blue patches of skin.

The wings are short and rounded, and the tail is also short.

This is a gregarious species, forming flocks outside the breeding season typically of about 25 birds that also roost communally.

These birds are terrestrial, and prone to run rather than fly when alarmed. They are, however, like most short- and broad-winged birds, very agile and powerful flyers, capable of hovering and even flying backwards when necessary.

Helmeted Guineafowl are great runners, and can readily cover 10 km and more in a day.

Their diet consists of a variety of animal and plant food; seeds, fruits, greens, snails, spiders, worms and insects, frogs, lizards, small snakes and small mammals. Guineafowl are equipped with strong claws and scratch in soil for food much like domestic chickens. They have well-developed spurs and use these to great effect when fighting.

Helmeted Guineafowl is often domesticated, and it is this species that is sold in Western supermarkets.