The Herring Gull, Larus argentatus, is a large gull (up to 26 inches or 66 cm long), and is the most abundant and best known of all gulls along the shores of Asia, western Europe, and North America. It breeds across North America, Europe and Asia.

Some Herring Gulls, especially those resident in colder areas, migrate further south in winter, but many are permanent residents, e.g. those on the lower Great Lakes, on the east coast of North America or at the North Sea shores.

Herring Gulls are also abundant around inland garbage dumps, and some have even adapted to life in inland cities.

This group has a ring distribution around the northern hemisphere. Differences between adjacent forms in this ring are fairly small, but by the time the circuit is completed, the end members, Herring Gull and Lesser Black-backed Gull, are clearly different species. 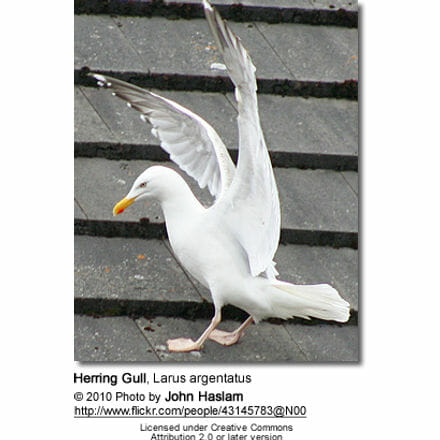 Several other gulls have been included in this species in the past but are now normally considered separate, e.g. Yellow-legged Gull (L. michahellis), Caspian Gull (L. cachinnans), Armenian Gull (L. armenicus) and Heuglin’s Gull (L. heuglini). 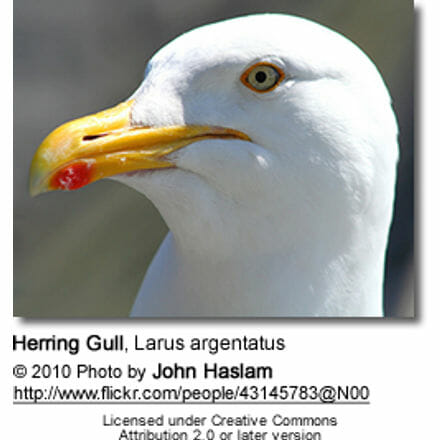 Adults in breeding plumage have a grey back and upperwings and white head and underparts. The wingtips are black with white spots known as “mirrors” .

The bill is yellow with a red spot and there is a ring of bare yellow skin around the pale eye. The legs are normally pink at all ages but can be yellowish, particularly in the Baltic population which was formerly regarded as a separate subspecies “L. a. omissus“.

Non-breeding adults have brown streaks on the head and neck.

Male and female plumage is identical at all stages of development, however adult males are often larger.

Juvenile and first-winter birds are mainly brown with darker streaks and have a dark bill and eyes. Second-winter birds have a whiter head and underparts with less streaking and the back is grey. Third-winter individuals are similar to adults but retain some of the features of immature birds such as brown feathers in the wings and dark markings on the bill. The Herring Gull attains adult plumage and reaches sexual maturity at an average age of four years. 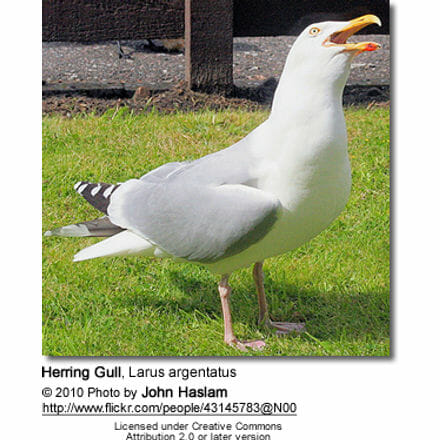 Adult Herring Gulls are similar to Ring-billed Gulls but are much larger, have pinkish legs, and a much thicker yellow bill with more pronounced gonys. First-winter Herring Gulls are much browner, but second and third-winter birds can be confusing since soft part colors are variable and third-year Herring Gull often show a ring around the bill. Such birds are most easily distinguished by the larger size and larger bill of Herring Gull.

The Herring Gull can be differentiated from the closely-related, similarly sized and proportioned Lesser Black-backed Gull by the latter’s dark grey (not actually black) back and upperwing plumage and its yellow legs and feet.

The loud laughing call is well-known in the northern hemisphere. The Herring Gull also has a yelping alarm call and a low barking anxiety call.

Herring Gull chicks and fledglings emit a distinctive, repetitive high-pitched ‘peep’, accompanied by a head-flicking gesture when begging for food from, or calling to their parents. It should also be noted that adult gulls in urban areas will also exhibit this behaviour when fed by humans. 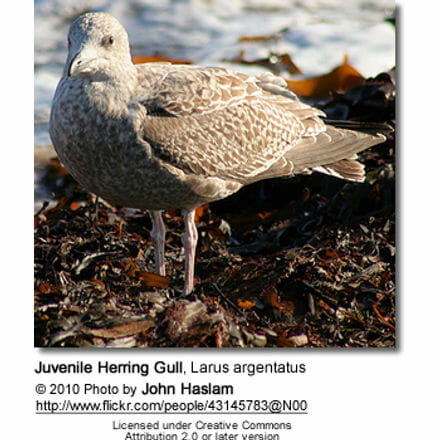 Herring Gull flocks have a loose pecking order, based on size, aggressiveness and physical strength. Adult males are usually dominant over females and juveniles in feeding and boundary disputes, whilst adult females are typically dominant when selecting nest sites. Communication between these birds is complex and highly-developed — employing both calls and body language. Two identical vocalizations can have very different (sometimes opposite) meanings, for example — depending on the positioning of the head, body, wings and tail relative to each other and the ground in the calling gull.

Unlike many flocking birds, Herring Gulls do not engage in social grooming and keep physical contact between individuals to a minimum. Outside of the male/female and parent/chick relationship, each Herring Gull attempts to maintain a respectful ‘safe distance’ from others of its kind. Any breach of this results in fighting, though severe injuries are seldom inflicted.

Herring Gulls are known to be capable of seeing ultraviolet light. 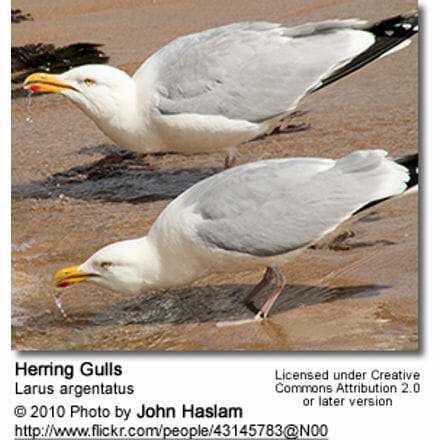 These are omnivores and opportunists like most Larus gulls, and will scavenge from garbage dumps, landfill sites, and sewage outflows, with refuse comprising up to half of the bird’s diet. It also steals the eggs and young of other gulls, as well as seeking suitable small prey in fields, on the coast or in urban areas, or robbing plovers or lapwings of their catches.

Herring Gulls may also dive from the surface of the water or engage in plunge diving in the pursuit of aquatic prey, though they are typically unable to reach depths of greater than 1-2 metres due to their natural buoyancy. Despite their name, they have no special preference for herrings — in fact, examinations have shown that echinoderms and crustaceans comprised a greater portion of these gulls’ stomach contents than fish, although fish is the principal element of regurgitations for nestlings.

Herring gulls can frequently be seen to drop shelled prey from a height in order to break the shell. In addition, the Herring Gull has been observed using pieces of bread as bait with which to catch goldfish. Vegetable matter such as roots, tubers, seeds, grains, nuts and fruit is also taken to an extent.

Herring Gulls may be observed rhythmically drumming their feet upon the ground for prolonged periods of time in a behaviour that superficially resembles Irish stepdancing. This is for the purpose of creating vibrations in the soil, driving earthworms to the surface, which are then consumed by the gull.

It is believed that these vibrations mimic those of digging moles, eliciting a surface escape behaviour from the earthworm, beneficial in encounters with this particular predator, which the Herring Gull then exploits to its own benefit in a similar manner to human worm charmers.

Whilst the Herring Gull is fully capable (unlike humans) of consuming seawater, utilizing specialized glands located above the eyes to remove excess salt from the body (which is then excreted in solution through the nostrils and drips from the end of the bill), it will drink fresh water in preference, if available.

During courtship, the hen will approach the cock on his own territory with a hunched, submissive posture whilst making begging calls (similar to those emitted by young gulls). If the cock chooses not to attack her and drive her away, he will respond by assuming an upright posture and making a mewing call.

This is followed by a period of synchronised head-tossing movements, after which the cock will then regurgitate some food for his prospective mate.

If this is accepted, copulation will follow. A nesting site will then be chosen by both birds.

Herring Gulls are almost exclusively sexually monogamous and may pair up for life, provided that the couple are successful in hatching their eggs.

Two to four eggs, usually three, are laid on the ground or cliff ledges in colonies, and are defended vigorously by this large gull. The eggs are a dark blotched, olive color. They are incubated for 28–30 days. Breeding colonies are predated by great black-backed gulls, harriers, corvids, herons and raccoons.

Juveniles use their beaks to “knock” on the red spot on the beaks of adults to indicate hunger. Parents typically disgorge food for their offspring when they are “knocked”.

The young birds are able to fly 35–40 days after hatching and fledge at six weeks of age. Chicks are generally fed by their parents until they are 11–12 weeks old but the feeding may continue up to six months of age, if the young gull continues to beg.

Like most gulls, Herring Gulls are long lived, with a maximum age of 49 years recorded. Raptors (especially owls, peregrine falcons and gyrfalcons) and seals (especially grey seals) occasionally prey on the non-nesting adults.

The Herring Gull is an increasingly common roof-nesting bird in urban areas of the UK.

The Clean Air Act 1956 forbade the burning of refuse at landfill sites, providing the Herring Gull with a regular and plentiful source of food. As a direct result of this, Herring Gull populations in Britain sky-rocketed.

Faced with a lack of space at their traditional colonies, the gulls ventured inland in search of new breeding grounds. Dwindling fish stocks in the seas around Britain may also have been a significant factor in the gulls’ move inland.

The gulls found the year-round, 24/7 (due to the presence of street lighting) food supply in the streets and gardens of Britain (e.g. discarded fast food, rubbish contained in easy-to-tear plastic bin bags, food intentionally left out for other birds or the gulls themselves), the relative lack of predators and readily-available, convenient, warm and undisturbed rooftop nesting space in towns and cities to their liking and swiftly became established. Particularly large urban gull colonies (composed primarily of Herring Gulls and Lesser Black-backed Gulls) are now present in Bristol, Gloucester and Aberdeen.

The survival rate for urban gulls is much higher than their counterparts in coastal areas, with an annual adult mortality rate of less than 5%. It is also common for each Herring Gull pair to successfully rear three chicks per year. This, when combined with the long-lived nature of Herring Gulls has resulted in a massive increase in numbers over a relatively short period of time and has brought the species into conflict with humans.

Once familiar with Man, urban Herring Gulls show little hesitation in swooping down to steal food from the hands of humans. During the breeding season, the gulls will also aggressively ‘dive bomb’ and attempt to strike with claws and wings (sometimes spraying faeces or vomit at the same time) at humans which they perceive to be a threat to their eggs and chicks — often innocent passers-by or residents of the buildings on which they have constructed their nests. Large amounts of gull excrement deposited on property and the noise from courting pairs and begging chicks in the summer months is also considered to be a nuisance by humans living alongside the Herring Gull.

Non-lethal attempts to deter the gulls from nesting in urban areas have been largely unsuccessful. The Herring Gull is intelligent and will completely ignore most ‘bird scaring’ technology after determining that it poses no threat.

Rooftop spikes, tensioned wires and similar are also generally ineffective against this species. If nests are removed and eggs are taken, broken, or oiled, the gulls will simply rebuild and/or re-lay, or choose another nest site in the same area and start over.

Attempts to scare the gulls away using raptors are similarly ineffective.

Although they are intimidated by birds of prey, Herring Gulls, in addition to being social birds with strength in numbers, are large, powerful and aggressive as individuals and are more than capable of fighting back against the potential predator, particularly if they consider their chicks to be at risk.

Herring Gulls are also naturally accustomed to predators (such as Skuas and Great Black-backed Gulls) living in the vicinity of their nest sites in the ‘wild’ and are not particularly discouraged from breeding by their presence.