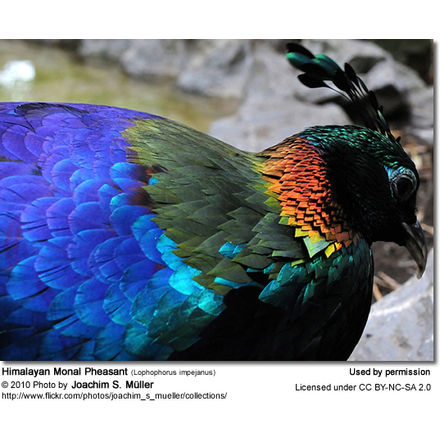 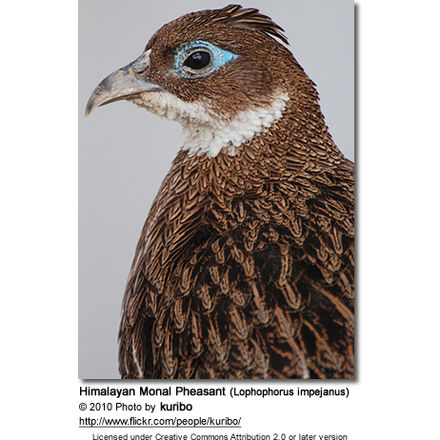 They are endemic to the Himalayas, eastern Afghanistan to western China. They can be found in Bhutan and countries of Pakistan, India (states of Jammu and Kashmir, Himachal Pradesh, Uttaranchal, Sikkim and Arunachal Pradesh), Nepal, and Southern Tibet. There is also a report of its occurrence in Myanmar.

These pheasants prefer cool upper temperate oak-conifer forests interspersed with open grassy slopes, cliffs and alpine meadows mostly at 9,000 to 10,000 ft elevations. They seem to exhibit clear and fluctuating altitudinal migration moving down as low as 6,500 feet in winter and up to 16,000 feet in the summer.

They are usually seen in pairs during the breeding season, which is from April to August. Outside that season, they tend to form large coveys and involve in communal roosting. 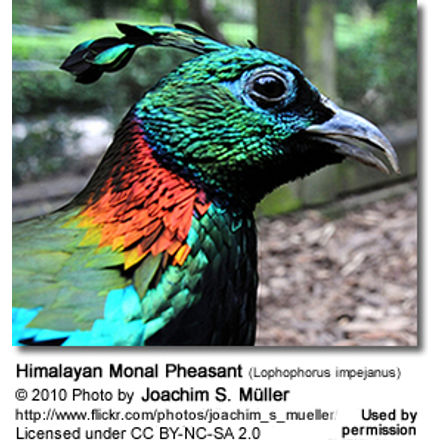 This species is considered stable throughout much of its range, but may have been eliminated in Afghanistan. The status of this pheasant is still fairly secure, although its cousin the Chinese Monal is classified as threatened due to poaching and other anthropogenic factors. Males had been under heavy hunting pressure for its crest feather, which was used to ornament hats of Himachal men, until 1982 when legal hunting was banned in the state.

A recent survey carried out in Arunachal Pradesh discovered a new type of Lophophorus species and its identity, though believed to be a subspecies of Sclater’s monal or a potential new species, is yet to be confirmed.

These pheasants are amongst the most beautiful pheasants due to their striking metallic-colored plumage. It is a relatively large sized bird averaging 2.3 feet (~70 cm) in length, the weight of males and females range between 4.4 and 5.2 lbs (1980 gram – 2 380 gram respectively). Females tend to be slightly smaller and lighter.

The male’s impressive display features bowing and vigorous waving of the rufous tail, but it is the iridescent plumage on the wings and neck that give the bird its reputation as the “nine-colored bird” consisting of interspersing mix of metallic colors of green, purple, red and blue.

The adult male has a long, metallic-green crest, much like a peacock, changeable reddish copper on the back and sides of the neck and a prominent white back and rump while in flight. The tail feathers are uniformly rufous being darker towards the tips.

The males also have a large white patch on the rump. The breast and underparts are black and the tail is copper. The male also has a bare patch of turquoise blue skin around the eye.

First year males resemble the hens, but are larger

First year males and immatures resemble females, except for males being larger and they have black feathers on the neck and breast. Females, while considerably duller than the males, are still quite attractive. Their upper parts are covered with mottled brownish-black feathers. Her throat is white and she has a short crest. The lower tail coverts of females are white, barred with black and rufous. Hens also have the blue patch around the eyes. 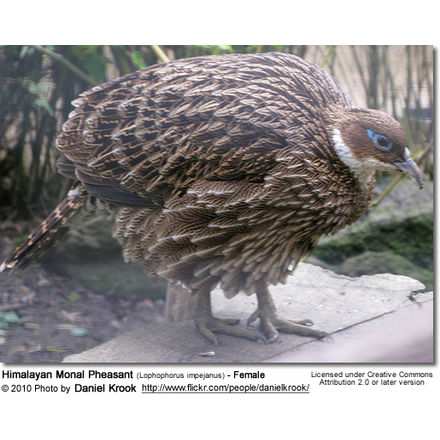 The birds have a shrill whistle, sometimes described as curlew-like.

They are great diggers, and use their heavy bills to root out tubers and subterranean insects. 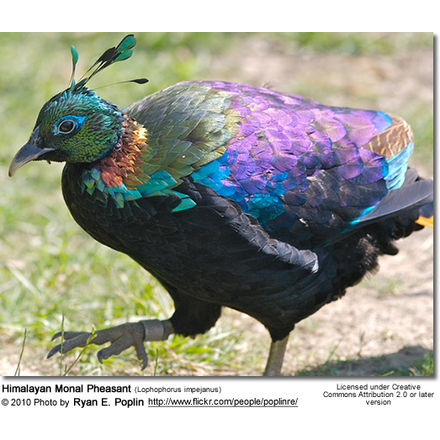 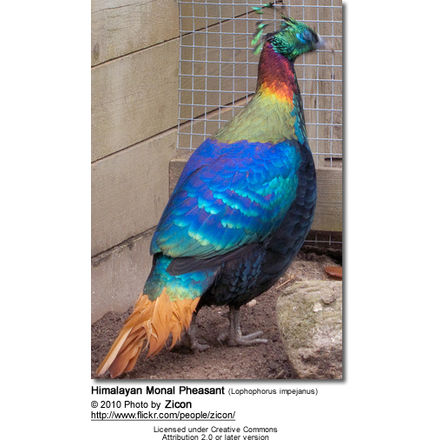 These striking pheasants are well established and commonly seen in aviculture. Despite their large size, they are gentle birds and many may become very trusting, especially the hens.

Most breeders keep these pheasant in pairs or even trios. As they are endemic to high altitudes they are very hardy birds. They can tolerate cold weather very well, but need plenty of shelter and shade from the hot summer sun as they are birds from the cool mountain forests and unable to withstand extreme heat. These large pheasants should be provided spacious and well-drained aviaries with the following recommended dimensions: 112 sq.ft. (~34 m2) – this being said, if you have the resources and land for large aviaries; do keep in mind that larger is always better.

They are strong diggers and will often destroy the grass, shrubs and other greenery in the aviary. They do best on sandy soil that satisfies their need for digging, but do be sure to keep it dry.

These pheasants breed well in captivity and usually make attentive parents. They start breeding in their second year. The breeding season usually commences in late April. The nest is a simple scrape in the ground or a hole in a rock face. The clutch size varies — averaging 3 to 5, but occasionally up to 12 eggs may be laid. The hen incubates these eggs for about 28 days.

If you decide to pull the chicks for hand rearing, make sure to provide plenty of space for the chicks in the brooder. Your birds under one year are susceptible to disease and to minimize exposure to pathogens, breeders opt for cages with wire bottoms or they keep the chicks in well-drained aviaries.