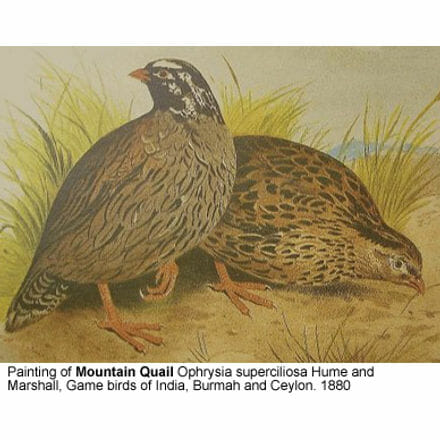 The Himalayan Quail, Ophrysia superciliosa is a medium-sized quail belong to the pheasant family. It was extremely rare and is feared extinct.

This species is known with certainty only from 2 locations in the western Himalayas in Uttarakhand, north-west India. The last verifiable record was in 1876, despite a number of searches, but its continued survival cannot be ruled out as it may be difficult to detect. The most recent unconfirmed reports are of a number of possible sightings around Nainital in 2003.

The Mountain quail—so called, for it is the least quail-like of all these little birds—is rather larger than the common grey quail, with a decidedly long tail for a bird of the kind, this appendage being fully as long as or longer than any ordinary partridge’s, although all but covered above and below by thelong tail-coverts. The general feathering is also of a long type, but the wings are decidedly short, and the colouring will at once distinguish the bird from any other of the family. The cock and hen, though neither is brilliantly colored, are absolutely unlike each other, the former being slate-grey, tinged with olive above, and with black edgings to the sides of the feathers, a black, head streaked with white, and black under-tail-coverts spotted with white; while the latter is brown, spotted with black centres to the feathers and the face a sort of pinkish grey. Remnants of the young plumage on some specimens in the British Museum seem to show that both sexes when young have a garb of closely mottled black, brown and buff, so that they might easily be passed over as of no particular account if the comparatively large tail were not noticed. The bill is red, bright coral in the male and dusky in the female, and the legs are dull red. In a pair kept in England the bill and legs were yellow. The length is about ten inches, with the tail three, the wing being only three and-a-half, and the shank one. The mountain quail was described in 1846 by J. E. Gray from living specimens in the fine collection of the Earl of Derby at Knowsley Hall, and he gave the locality as ” India” with a query. Nothing more was heard of it till 1865, when Kenneth Mackinnon shot a pair in November, in a hollow between Budraj and Benog, behind Mussoorie, at about 6,000 feet elevation. Again, in November, but two years later, at least one party established themselves at Jerepani, and remained till the summer of 1868; and five specimens were procured. Then, in December 1876, Major G. Carwithen got one bird on the eastern slopes of Sher-ka-danda, close to Naini Tal, at an elevation of 7,000 feet. No specimens have turned up since. It seems to be a migratory bird, arriving in winter, although its small wings look ill-adapted for a journey of any length. It goes in single pairs or coveys, and keeps close to cover in grass jungle or brushwood, being almost impossible to flush without a dog. Its flight is heavy, slow, and short; its food, grass seeds. The call is a shrill whistle. Anyone coming across these birds again should do his best to secure a living pair or two, and either breed from them himself— which could probably be done in the hills in a well-grassed run—or send them Home to the London Zoological Gardens or down to the Calcutta Gardens. In this way eggs might be obtained, whereas we are likely to wait a long time for them if we look to the discovery of a nest in the wild state in the case of such a rare and erratic bird as this one appears to be.