The Hornbill bird (Bucerotidae) is a family of birds found in tropical and subtropical Africa and Asia. They are characterized by a long, down-curved bill that is frequently brightly colored. 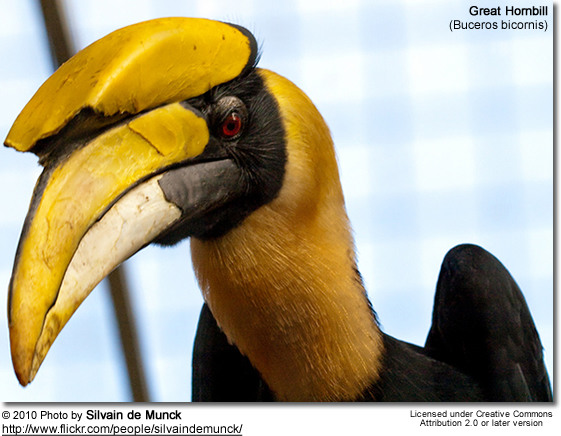 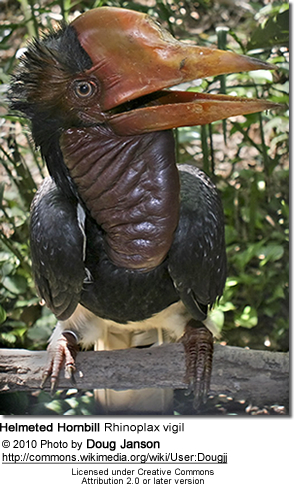 Hornbills (Bucerotidae) are a family of bird found in tropical and sub-tropical Africa and Asia.

They are characterized by a long, down-curved bill which is frequently brightly-colored and sometimes has a casque on the upper mandible. Both the common English and the scientific name of the family refer to the shape of the bill, “buceros” being “cow horn” in Greek. In addition, they possess a two-lobed kidney. Hornbills are the only birds in which the first two neck vertebrae (the axis and atlas) are fused together; this probably provides a more stable platform for carrying the bill.

The family is omnivorous, feeding on fruit and small animals.

They are monogamous breeders nesting in natural cavities in trees and sometimes cliffs.

A number of species of hornbill are threatened with extinction, mostly insular species with small ranges.

There are two subfamilies: the Bucorvinae contain the 2 ground-hornbills in a single genus, whereas the Bucerotinae contain all other taxa. In the Sibley-Ahlquist taxonomy, hornbills are separated from the Coraciiformes as a separate order Bucerotiformes, with the subfamilies elevated to family level. Given that they are almost as distant from the rollers, kingfishers and allies as are the trogons, the arrangement chosen is more a matter of personal taste than any well-established taxonomic practice. All that can be said with reasonable certainty is that placing the hornbills outside the Coraciiformes and the trogons inside would be incorrect. 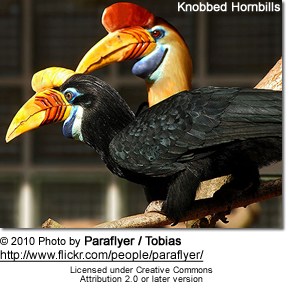 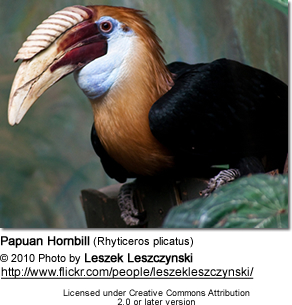 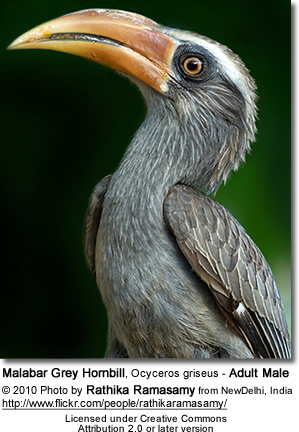 The Bucerotidae include some 57 living species, though a number of cryptic species may yet be split in some insular forms.

Their distribution ranges from Africa south of the Sahara through tropical Asia to the Philippines and Solomon Islands. Most are arboreal birds, but the large ground-hornbills (Bucorvus), as their name implies, are terrestrial birds of open savanna. Of the 23 species found in Africa 13 of these species are birds of the more open woodlands and savanna, and some species even occur in highly arid environments. The remaining species are found in dense forests. This contrasts with Asia, where a single species occurs in open savanna and the remainder are forest species.

Hornbills show considerable variation in size as a family, ranging in size from the Black Dwarf Hornbill (Tockus hartlaubi), at 102 grams (3.6 oz) and 30 cm (1 foot), to the Southern Ground-hornbill (Bucorvus leadbeateri), at up to 6.2 kg (13.6 lbs) and 1.2 m (4 feet). Males are always bigger than the females, though the extent to which this is true varies dependent upon species. The extent of sexual dimorphism also varies with body parts, for example the difference in body mass between males and females is between 1-17%, but the variation is 8-30% for bill length and 1-21% in wing length.

The most distinctive feature of the hornbills is the heavy bill, supported by powerful neck muscles as well as by the fused vertebrae. The large bill assists in fighting, preening, and constructing the nest, as well as catching prey. A feature unique to the hornbills is the casque, a hollow structure that runs along the upper mandible . In some species it is barely perceptible and appears to serve no function beyond reinforcing the bill. In other species it is quite large, is reinforced with bone, and has openings between the hollow centre allowing serve as a resonator for calls. In the Helmeted Hornbill the casque is not hollow but is filled with ivory and is used as a battering ram used in dramatic aerial jousts. Aerial casque-butting has also been reported in the Great Hornbill.

The plumage of hornbills is typically black, grey, white, or brown, although typically offset by bright colours on the bill, or patches of bare colored skin on the face or wattles. Some species exhibit sexual dichromatism; in the Abyssinian Ground-hornbill, for example, pure blue skin on the face and throat denotes an adult female, and red and blue skin denotes an adult male. The calls of hornbills are loud, and vary distinctly between different species. 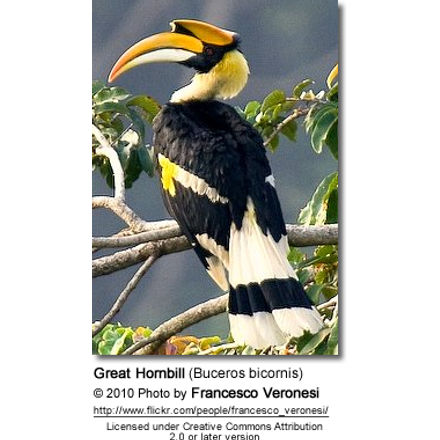 Hornbills possess binocular vision, although unlike most birds with this type of vision the bill intrudes on their visual field. This allows them to see their own bill tip and aids in precision handling of food objects with their bill. The eyes are also protected by large eyelashes which act as a sunshade.

Hornbills are diurnal, generally travelling in pairs or small family groups. Larger flocks sometimes form in the non-breeding season. The largest assemblages of hornbills form at some roosting sites, where as many as 2400 individual birds may be found.

Hornbills are omnivorous birds, eating fruit, insects and small animals. They cannot swallow food caught at the tip of the beak as their tongues are too short to manipulate it, so they toss it back to the throat with a jerk of the head. While both open country and forest species are omnivorous, species that specialise in feeding on fruit are generally found in forests while the more carnivorous species are found in open country. Forest living species of hornbills are considered to be important seed dispersers.

In some instances hornbills defend a fixed territory. Territoriality is related to diet; fruit sources are often patchily distributed and require long distance travel in order to find, thus species that specialise in fruit are less territorial.

The female lays up to six white eggs in existing holes or crevices, either in trees or rocks. The cavities are usually natural, but some species may nest in the abandoned nests of woodpeckers and barbets. Nesting sites may be used in consecutive breeding seasons by the same pair. 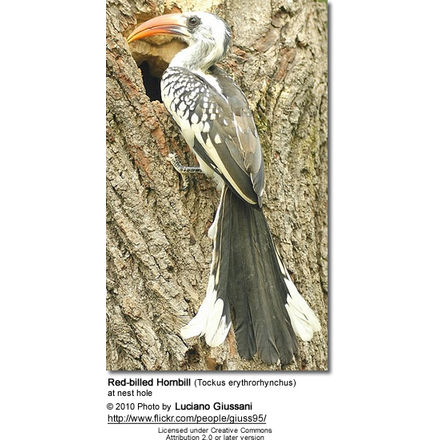 Before incubation, the females of all Bucerotinae—sometimes assisted by the male—begin to close the entrance to the nest cavity with a wall made of mud, droppings and fruit pulp. When the female is ready to lay her eggs, the entrance is just large enough for it to enter the nest, and after she has done so, the remaining opening is also all but sealed shut. There is only one narrow aperture, big enough for the male to transfer food to the mother and eventually the chicks. The function of this behaviour is apparently related to protecting the nesting site from rival hornbills. The sealing can be done in just a few hours, at most it takes a few days.

Having sealed the nest it takes a further five days for the first egg to be laid. Clutch size varies from one or two eggs in the larger species to up to eight eggs for the smaller species. During the incubation period the female undergoes a complete and simultaneous moult. It has been suggested that the darkness of the cavity triggers a hormone involved in moulting. Non-breeding females and males go through a sequential moult.

When the chicks and the female are too big to fit in the nest, the mother breaks out, then both parents feed the chicks. In some species the mother rebuilds the wall, whereas in others the chicks themselves rebuild the wall unaided. The ground-hornbills are conventional cavity-nesters instead.

Associations with other species

A number of hornbills have associations with other animal species. For example hornbills in Africa have a mutualistic relationship with Dwarf Mongooses, in which they forage together and warn each other of nearby birds of prey and other predators. Other relationships are commensal, for example following monkeys or other animals and eating the insects flushed up by them.

Most species’ casques are very light, containing a good deal of airspace. However, the Helmeted Hornbill has a solid casque made of a material called hornbill ivory, which is greatly valued as a carving material in China and Japan. It is often used as a medium for the art of netsuke. 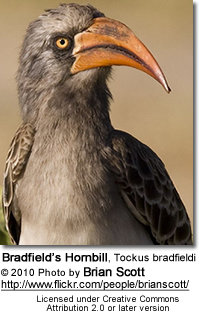 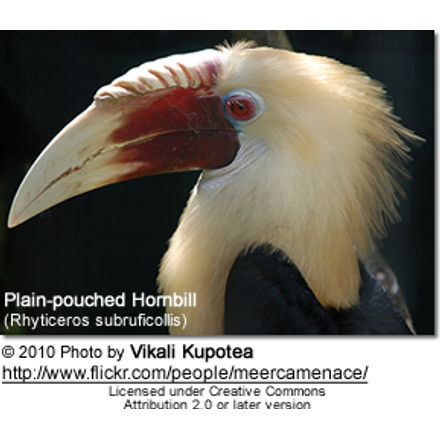 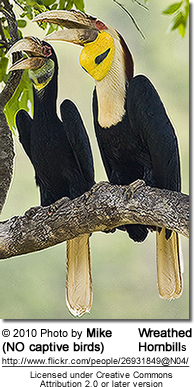 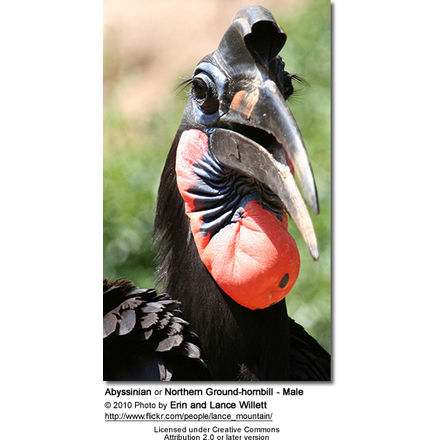