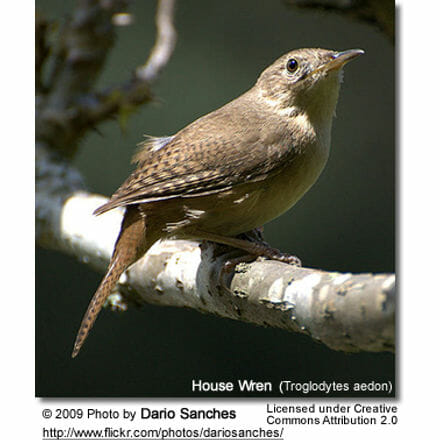 The House Wren (Troglodytes aedon) is a small songbird of Wren family.

Their breeding habitat is semi-open areas from Canada to southernmost South America. The tropical forms from southern Mexico southwards are sometimes considered a separate species, the Southern House Wren, Troglodytes musculus. North American birds migrate to the southern United States and Mexico. The House Wren may have been displaced somewhat in some northern parts of its range by the introduction of the House Sparrow but is still common and widespread throughout most of the two continents.

This bird builds its large cup nest in various sorts of cavities, either natural or man-made, often using bird houses where they are available, and sometimes choosing unusual sites such as old shoes. The female incubates the clutch of three to six red-blotched cream-white eggs for 14-15 days, and the naked young take another 16-19 days to fledge. House Wrens are known to destroy the eggs of other birds nesting near their territory. 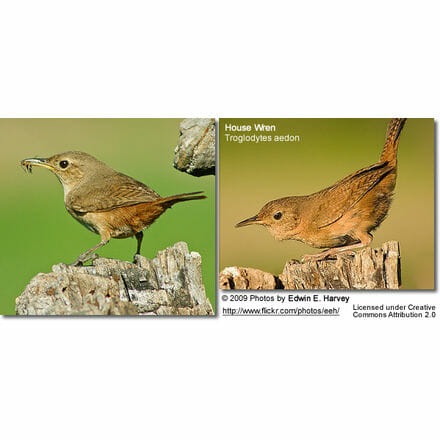 Adults are 11.5 cm long and weigh 12 g. They have brown or grey-brown upperparts with pale grey underparts; there are black bars on the flanks, wings and tail. They have an eye ring, a faint line over the eye, a short thin bill and pink legs. There are regional variations in the appearance of this bird. The subspecies found on Tobago, T. a. tobagensis is larger and has much paler underparts than the mainland forms.

Other wrens with indistinct supercilium (line above eye)s are Winter, Sedge and Rock Wrens. Winter Wren is more reddish-brown above, darker below and has a shorter tail. Sedge Wren is buffier on the breast and is streaked with white on the crown and back. Rock Wren is larger with a contrast between the gray back and brown rump and has buffy tips to the tail.

This bird’s rich bubbly song is commonly heard during the nesting season but not at all afterwards.