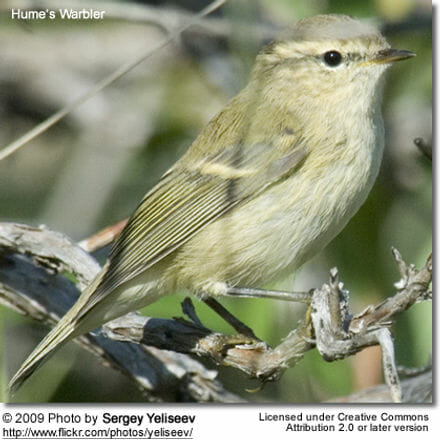 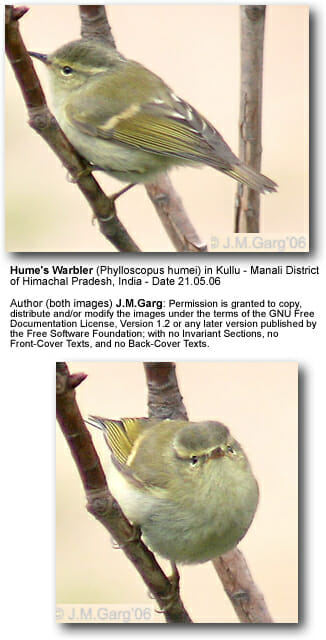 Hume’s Leaf Warbler (Phylloscopus humei) or Hume’s Warbler is a small leaf warbler which breeds in the mountains of central Asia from the Hindu Kush and Karakoram east and north to the Tien Shan in China and the Altay Mountains in Mongolia.

This is a common bird of mountain woodlands at altitudes of up to 3,500m. The nest is built on the ground.

This tiny warbler is prone to vagrancy as far as western Europe in October, despite a 3000km distance from its breeding grounds. It is a rare vagrant in late autumn and winter in Great Britain.

This bird is named after Allan Octavian Hume.

The Hume’s Leaf Warbler is one of the smallest warblers, and shares greenish upperparts and off-white underparts with typical leaf warblers. It is very similar to the Yellow-browed Warbler, sharing a long supercilium (line above eye), crown stripe and well-marked tertials (= the flight feathers that are closest to the bird’s body along the wing). However, it has only one prominent wing bar, only a faint second wing bar and duller colours. It also has dark legs and lower beak.

This bird is not shy, although its arboreal life style makes it difficult to observe. It is constantly in motion.

Its song is buzzing and high pitched. The best distinction from the Yellow-browed is the more disyllabic call. While the Eastern and Western Hume’s Leaf Warblers already show noticeable differences in mtDNA sequence and calls, their songs do not differ (Irwin et al., 2001); they are reproductively isolated only by allopatry and not usually considered separate species.

Like most Old World warblers, this small passerine is insectivorous. 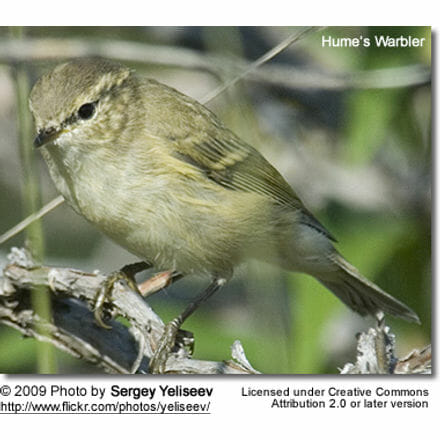