Following listed (with photos) are hummingbirds found, or potentially found, in Florida.

Ruby-throated Hummingbirds (Archilochus colubris) – Native and most common hummingbirds in Florida between early to mid-March and usually leave by the end of October. Migrating males are usually the first to arrive and the first to depart. The females and the young usually follow about two weeks later. 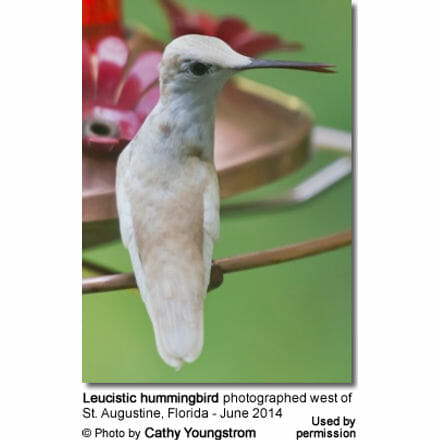 September 2016:  Linda Young photographed a white hummingbird in Freeport, FL that appeared at her feeder on 9-25-2016 and on following days.   [Photo submitted for verification – unpublished]

June 2014:  Cathy Youngstrom photographed the below leucistic hummingbird about 18 miles west of St. Augustine, northern Florida. She reports that this beautiful hummer has been feeding at her location for about 10 days and feeds together with about 8 resident Ruby-throated Hummingbirds. One can assume that this partial-white hummingbird is also a Ruby-throated.

Their range is mostly restricted to the Bahamas; however, some vagrants made it to Florida.

Their plumage is green above with mixed olive-buff underparts. The male has a reddish-pink throat lined by a white collar during breeding season. After breeding season is over, he loses the colorful throat, which then turns a pale grey color (known as “eclipse plumage”).

The female has a much duller plumage. She has a rounded tail – while the male’s tail is deeply forked.

The upper plumage and chest is mostly green and the undertail feathers whitish. The long, thin, straight bill is red at the base.

The male has a turquoise throat, turquoise and white spotted chest and flanks, a deep green back, a white belly and breast and a wide violet-blue band on a short, thin red and black bill.

The female has a white or cream colored throat that is speckled with green, a whitish belly, deep green crown and a drab green back. 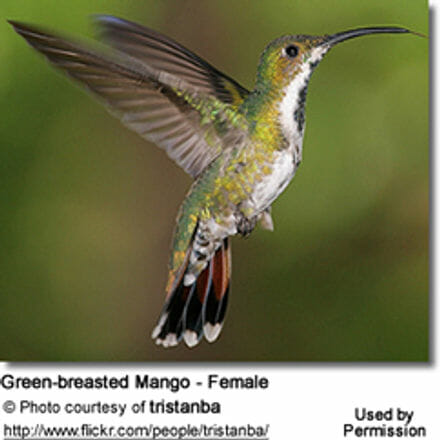 (Anthracothorax prevostii) – Accidental / Vagrants – These hummingbirds are native to Mexico, Central America down to Costa Rica, and some Caribbean islands. However, juveniles especially have been venturing into the United States. Several young birds have been sighted in Florida.

Females and Juvenile Males have a broad band of magenta and dark blue on the outer tail feathers, with narrow white tips on the outer 3 to 4 tail feathers. The back is bronze-green. Below they are white with a dark central stripe that is black on the chin and changes to blue-green on the throat.

Some hummingbird species have been reported, but have not been adequately documented to be accepted by the State Records Committee:

Cuban Emerald, Chlorostilbon ricordii– (Although there were confirmed sightings in southern Florida, (One of which was confirmed by Dr. John T. Zimmer, Curator of Birds at the American Museum of Natural History in New York City.) – Rare Vagrant

Additional hummingbird species that might (or may already have) expand their territory into Florida are: 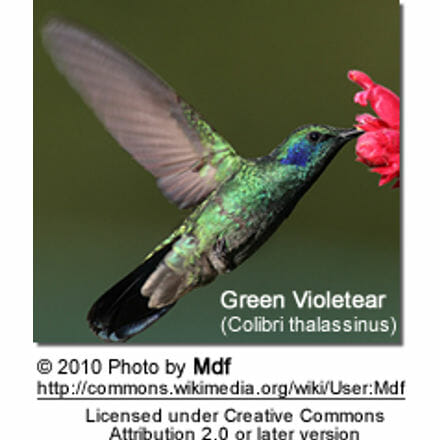 They are mostly resident in Mexico and Central America, but some seasonal movements have been observed. They may wander north to the United States and even as far north as Canada.