Following listed (with photos) are hummingbirds found in Georgia.

The hummingbirds listed on this page are known to occur in Georgia (or as indicated) are expanding their territories to the east and are likely to occur there in the future.

With global warming and winter-flowering plants and hummingbird feeders, the number of hummingbirds in this area will continue to increase.

The Georgia Department of Natural Resources, Wildlife Resources Division (DNR/WRD) is encouraging residents to put up at least one hummingbird feeder during the winter months (or plant hummingbird feeding plants – please refer to this page), to allow them to document new hummingbirds in this state.

They found that wintering hummingbird often return to the same hummingbird feeder year after year.

The only KNOWN hummingbird species to nest in Georgia is the Ruby-throated Hummingbird.

The wintering hummingbird arrive in Georgia as early as August, but most will come mid-November through December and stay until late March or early April.

Some do remain in this state year-round, for example, the Ruby-throated Hummingbird, Archilochus colubris – historically, only nests in Florida, but because of wintering blooming plants and easy access to hummingbird feeders, some are residing in Georgia year-round.

The following hummingbird species are known to occur in Georgia (with photos and ID assistance):

Ruby-throated Hummingbirds (Archilochus colubris) – Native Breeders – Common during the summer, rare in the winter. The only hummingbird to nest in Georgia; some are now remaining year-round. The migratory birds arrive in south Georgia early March. In the mountain areas, they usually arrive a couple of weeks later. They usually travel back to their wintering territory around mid-October. Males usually depart first, and females and the young follow about two weeks later.

Rufous Hummingbirds (Selasphorus rufus) – The most commonly observed wintering hummingbird in Georgia, other than the Ruby-throated Hummingbird in the southeastern United States.

Anna’s Hummingbirds (Calypte anna) – Rare Wintering Hummingbird – Only three confirmed records for Georgia. Occur in fall and winter in all regions. Found in suburban gardens and at hummingbird feeders … The Anna’s hummingbird lives in the Far West and winters in states like New Mexico and Arizona.

Broad-billed Hummingbirds (Cynanthus latirostris) – Accidental / Vagrants / Wintering Hummingbirds – These mostly Mexican hummingbirds venture into the United States regularly; they mostly visit the southern parts – but a few vagrants travel as far north as Wisconsin. Only one confirmed sighting in Georgia of an adult male that overwintered in a backyard in Macon during the winter of 2001-2002.

Calliope Hummingbirds (Stellula calliope) – Accidental / Vagrant – Uncommon Winter Visitor – The first one has been recorded in Georgia during the winter of 1998-99. To this date, only one or two of them are reported each winter. 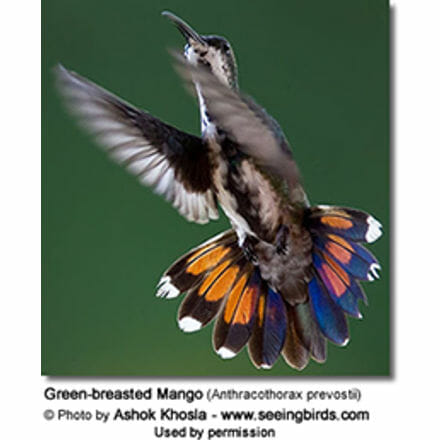 These hummingbirds are native to Mexico, Central America down to Costa Rica, and some Caribbean islands. However, juveniles especially have been venturing into the United States. A juvenile bird, possibly a male, was reported in in Dublin, Georgia, in October 2007.

Adult Males: Glossy bright green plumage. The vent and the sides (blanks) are more yellowish brown. Broad blue area from its throat down to below the chest – which may appear black in poor light conditions. Outer tail feathers range in color from an orangey-red to magenta or a deep purple tipped with black.

Females and Juvenile Males have 3 to 4 white-tipped outer tail feathers; there is a broad magenta and iridescent dark blue band on most tail feathers. The back is bronze-green. Below they are white with a dark central stripe that changes from black at the chin to blue-green on the throat.

Magnificent or Refulgent Hummingbirds (Eugenes fulgens) – Accidental / Vagrant – Georgia’s largest hummingbird. Only two of them were documented in Georgia (one in summer).

(Colibri thalassinus) – Rare / Accidental – Only one verified sighting in Thomasville, July 2001. They are mostly resident in Mexico and Central America, but some seasonal movements have been observed. They may wander north to the United States and even as far north as Canada.

An albino (all white) hummingbird (undetermined) was also photographed in Sept. 2004 in Ellijay, GA

Hummingbird species expected to expand their territories into Georgia: