The following 4 hummingbird species are known to occur in Nebraska.

Most migratory hummingbirds arrive in Nebraska between April to May for the nesting season.

Ruby-throated Hummingbirds, Archilochus colubris – It is the most likely hummingbird species to be seen in Nebraska – and it is the ONLY hummingbird species that occurs in the eastern half of the state, where they often nest along the Missouri River. However, nests have been reported as far west as North Platte. They have been reported as far west in Nebraska as Scotts Bluff County.

They usually arrive early to mid-May and leave in mid-September to early October to return to their winter territories. Migrating males are usually the first to arrive and the first to depart. The females and juveniles usually follow about two weeks later.

Calliope Hummingbirds, Stellula calliope – Accidental Vagrant – The rarest hummingbird species to occur in Nebraska. They are common breeders in western Wyoming, and occasionally stray into Nebraska.

The smallest breeding bird in North America. It weighs as little as a penny! It is the smallest long distant migrant bird in the world – traveling as far as 9,000 km (5,600 miles) from the cold and harsh higher elevations of the western United States and Canada, to winter in southern Mexico. They tend to be less aggressive than the larger hummingbirds, and typically feed low in the flowers and away from the more aggressive hummingbird species.

The upper plumage of both males and females is mostly a glossy green and below creamy white. Relatively short tail and beak. Males have a white throat with iridescent elongated gorget (throat) feathers that form wine-red or purple streaks and — when erected – show a “whiskered” effect. Females can be identified by their whitish throats with dark streaks. 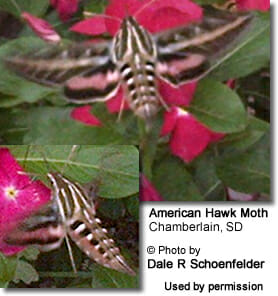 Many hummingbirds favor red blossoms with a tubular shape (but some species prefer other colors). Hummingbirds feed readily on pink, blue, orange, peach and purple flowers.