In New Jersey, the following hummingbirds are most commonly found …

Ruby-throated Hummingbirds, Archilochus colubris – Native / Common – Usually arrive in mid to late April (especially around April 19 through 23) and early May – with males usually being the first to show up to stake out their feeding territories. Most leave toward the end of September and October. Males usually depart first, and females and juveniles follow about two weeks later.

Rufous Hummingbirds Selasphorus rufus — Native / Common … Like the Ruby-throated Hummingbird , they usually arrive in the first week of May (with some arriving as early as mid April). Males are usually the first to show up to stake out their feeding territories. Most leave toward the end of September. Males usually depart first, and females and juveniles follow about two weeks later.

Allen’s Hummingbirds, Selasphorus sasin – Rare visitors – Historically, these birds nested in coastal California and wintered in Mexico; but more and more of them are remaining in California year-round or are traveling to the eastern United States for the winter. 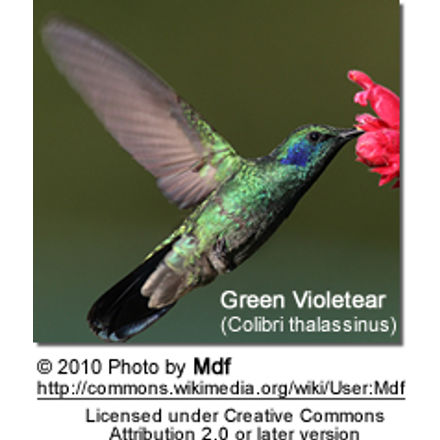 Green Violetear Hummingbirds (Colibri thalassinus) – Rare / Accidental – Only one bird reported, between 23 – 24 August 2005 – sighting occurred on Locust Point Road, Rumson, NJ. They are mostly resident in Mexico and Central America, but some seasonal movements have been observed. They may wander north to the United States and even as far north as Canada..

Males and females resemble each other; except females are usually somewhat smaller and have plumage that is a little duller than the males.

The plumage is mostly grass green turning into a bronze color on the rump and uppertail feathers.

There is a wide violet central spot on the upper chest and a violet-blue band along the chin that may connect to the violet-blue “ear”. The tail is square and slightly notched; and there is a broad dark blue band at the end of the tail. 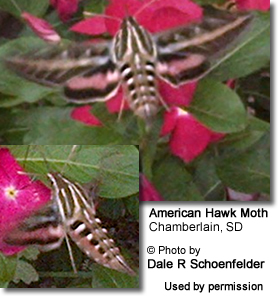 Particularly the smaller hummingbird species are easily confused with insects – specifically with bees, or the hawk, clearwing or sphinx moths. Adding to the confusion is the fact that these insects are often found in the hummers’ territory and have similar flying and feeding patterns.

Moths have a couple of sensors or “antennas” on top of the head. Provided you can get close enough to see them, this would be a good way of differentiating them from the hummers. They may also have some yellow at the backend.

Hummingbirds in Other Places