The Indian Grey Hornbill (Ocyceros birostris) is a common hornbill found on the Indian subcontinent.

It is mostly arboreal (= living in trees) and is commonly sighted in pairs.

They have grey feathers all over the body with a light grey or dull white belly. The horn is black or dark grey with a casque (a large display growth on the upper mandible of the bill) extending up to the point of curvature in the horn.

They are one of the few hornbill species found within urban areas in many cities where they are able to make use of large avenue trees.

They are about 24 inches long. The upperparts are greyish brown and there is a slight trace of a pale supercilium. The ear coverts are darker. The flight feathers of the wing are dark brown and whitish tipped. The tail has a white tip and a dark subterminal band. They have a red iris and the eyelids have eyelashes. The casque (a large display growth on the upper bill) is short and pointed.

The male has a larger casque on a dark bill while the culmen and lower mandible are yellowish. The bare skin around the eye is dark in the male while it is sometimes pale reddish in females.

The female has a more yellowish bill with black on the basal half and on the casque. 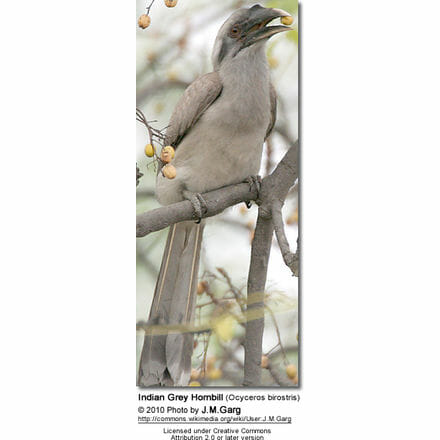 The species is found mainly on the plains up to about 2000 feet.

It is found from the foothills of the Himalayas southwards bounded on the west by the Indus system and the Gangetic delta on the east.

It may make local movements in the drier western region. It is found even within cities that have old avenue trees.

It is found mainly on the plains up to about 1400 m and does not overlap much with the Malabar Grey Hornbill of the Western Ghats.

The call is a squealing call somewhat like that of a Black Kite. The flight is heavy and involves flapping interspersed with glides. They are found in pairs or small groups.

The nesting season is April to June and the clutch varies from one to five very symmetrical white eggs. Indian Grey Hornbills usually nest in tree hollows on tall trees. An existing hollow may be excavated further to suit. The female enters the nest hollow and seals the nest hole and leaves only a small vertical slit that the male uses to feed her. The nest entrance is sealed by the female using its excreta. While inside the nest, the female moults her flight feathers and incubates the eggs. The regrowth of the feathers in the female coincides with the maturity of the chicks at which point the nest is broken open.

A study at a nest near Mumbai noted that the key fruiting trees on which they fed were Streblus asper, Cansjera rheedii, Carissa carandas, Grewia tiliaefolia, Lannea coromandelica, Ficus spp., Sterculia urens and Securinega leucopyrus. They are also known to take mollusks, scorpions, insects, small birds (has been recorded removing and possibly preying on the chicks of Rose-ringed Parakeets) and reptiles in their diet. They are known to feed on the fruits of Thevetia peruviana which are known to be toxic to many vertebrates.

They are almost completely arboreal and very rarely descend to the ground where they may pick up fallen fruits or dust bathe.