The Indian Vulture, Gyps indicus, is an Old World vulture in the family Accipitridae, which also includes eagles, kites, buzzards and hawks. It is closely related to the European Griffon Vulture, G. fulvus

Some sources treat the birds in the eastern part of its range as a separate species, the Slender-billed Vulture Gyps tenuirostris.

The birds in the eastern part of its range, formerly considered a subspecies, have been shown to constitute a separate species, the Slender-billed Vulture Gyps tenuirostris. Previously, both were lumped together under the name Long-billed Vulture.

Like other vultures it is a scavenger, feeding mostly from carcasses of dead animals which it finds by soaring over savannah and around human habitation. It often moves in flocks.

It breeds on crags or in trees in mountains in India and South-east Asia, laying one egg.

Birds may form loose colonies. The population is mostly resident. 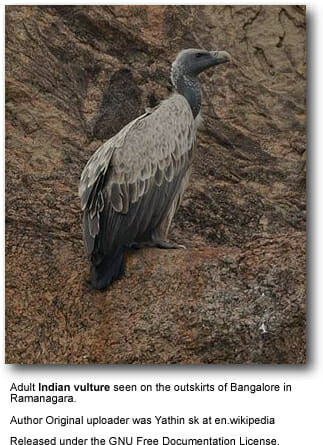 This vulture averages 92 cm or 36 inches in length (including tail).

Adults have pale-yellowish bill and cere, pale eyerings, large white neck-ruff, as well as buff back and upperwing coverts. The stout blackish neck has a pale down.

Juvenile birds have dark bills with a pale culmen. (= The culmen or culmen ridge is a part of a bird’s bill. It is the external ridge along the outer part of the center of the upper mandible, formed where the two halves of the mandible join.)

; pinkish head and neck covered in pale down and dingy heavily streaked underparts. In flight thighs are heavily feathered and concolourous with the rest of the underparts.

It is distinguished from that species by its less buff body and wing coverts. It also lacks the whitish median covert bar shown by Griffon.

The Indian Vulture and the Indian White-rumped Vulture, G. bengalensis species have suffered a 99%–97% population decrease in Pakistan and India and the cause of this has been identified as poisoning caused by the veterinary drug diclofenac.

Diclofenac is a non-steroidal anti-inflammatory drug (NSAID) and when given to working animals it can reduce joint pain and so keep them working for longer.

The drug is believed to be swallowed by vultures with the flesh of dead cattle which were given diclofenac in the last days of life. Diclofenac causes kidney failure in several species of Vultures. In March 2005 the Indian Government announced its support for a ban on the veterinary use of diclofenac.

Another NSAID, meloxicam, has been found to be harmless to vultures and should prove to be an acceptable substitute for diclofenac.

In March 2006 diclofenac was still being used for animals throughout India and the changes in Indian legislation are awaited. When meloxicam production is increased it is hoped that it will be as cheap as diclofenac.

Captive breeding programmes for several species of Indian vultue have been started.

The vultures are long lived and slow in breeding, so the programmes are expected to take decades. Vultures reach breeding age at about 5 years old. It is hoped that captive breed birds will be released back to the wild when the invironment is clear of diclofenac.