The Indian White-rumped Vulture (Gyps bengalensis) is an Old World vulture in the family Accipitridae, which also includes eagles, kites, buzzards and hawks. It is closely related to the European Griffon Vulture, G. fulv

Within the well-supported clade of the genus Gyps which includes Asian, African and European populations, it has been determined that this species is basal with the other species being more recent in their species divergence. 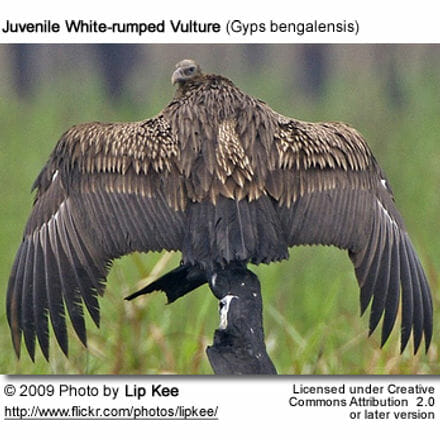 The White-rumped Vulture is a typical vulture, with an unfeathered head and neck, very broad wings and short tail feathers. It is much smaller than European Griffon. This is the smallest of the Gyps vultures, but is still a very large bird. It weighs 9b -13lb, measures 89–93 cm in length, and has a wingspan of 83-88 inches.

It has a white neck ruff. The adult’s whitish back, rump and underwing coverts contrast with the otherwise dark plumage. The body is black and the secondaries (shorter, upper “arm” feathers) are silvery grey. The head is tinged in pink and bill is silvery with dark ceres. The nostril openings are slit-like.

Juveniles are largely dark and take about four or five years to acquire the adult plumage.

In flight, the adults show a dark leading edge of the wing and has a white wing-lining on the underside. The undertail coverts are black.

This vulture builds its nest on tall trees often near human habitations in northern and central India, Pakistan, Nepal and southeast Asia, laying one egg.

Like other vultures it is a scavenger, feeding mostly from carcasses of dead animals which it finds by soaring high in thermals and spotting other scavengers. It often moves in flocks. At one time, it was the most numerous of the vultures in India.

These birds are usually inactive until the morning sun has warmed up the air with sufficient thermals to support their soaring. They circle and rise in altitude and join move off in a glide to change thermals. Large numbers were once visible in the late morning skies above Indian cities.

When a kill is found they quickly descend and feed voraciously, and will perch on trees nearby and are known to sometimes descend even after dark to feed on a carcass. In forests, the sight of their soaring was often the indication of a tiger kill.

Allan Octavian Hume noted based on the observation of “hundreds of nests” that they always nested on large trees near habitations even when there were convenient cliffs in the vicinity. Their preferred trees were Banyan, Peepul, Arjun and Neem. The main nesting period was November to March with eggs being laid mainly in January. Nests are usually in clusters and isolated nests tend to be those of younger birds. Solitary nests are never used regularly and are sometimes taken over by the Red-headed Vulture and large owls such as the The Dusky Eagle Owl (Bubo coromandus). Nests are nearly 3 feet in diameter and half a foot in thickness. Prior to laying an egg, the nest is lined with green leaves. A single egg is laid which is white with a tinge of bluish-green. Female birds are reported to destroy the nest on loss of an egg. They are usually silent but make hissing and roaring sounds at the nest or when jostling for food.

When feeding at carcasses they are dominated over by King Vultures Sarcogyps calvus.

A freak case of a bird getting caught in the mouth of dying calf and dying trapped within has been noted. Mycoplasmas have been isolated from tissues of the bird. Mallophagan parasites such as Falcolipeurus and Colpocephalum turbinatum have been collected from the species. Ticks, Argas (Persicargas) abdussalami, have been collected in numbers from the roost trees of these vultures in Pakistan. A specimen in captivity lived for at least 12 years.

This species was very common, especially in the Gangetic plains of India and often seen nesting on the avenue trees within large cities in the region. Hugh Whistler noted for instance in his guide to the birds of India that it “is the commonest of all the Vultures of India, and must be familiar to those who have visited the Towers of Silence in Bombay.” T. C. Jerdon noted that “[T]his is the most common Vulture of India, and is found in immense numbers all over the country, … At Calcutta one may frequently be seen seated on the bloated corpse of some Hindoo floating up or down with the tide, its wing spread, to assist in steadying it…” Prior to the 1990s they were even seen as a nuisance, particularly to aircraft as they were often involved in bird strikes. In 1990, the species had already become rare in Andhra Pradesh in the districts of Guntur and Prakasham. The hunting of the birds for meat by the Bandola (Banda) people there was attributed as a reason. A cyclone in the region during 1990 resulted in numerous livestock deaths and no vultures were found at the carcasses.

This species, as well as the Indian and Slender-billed Vultures have suffered a 99 percent population decrease in India and nearby countries since the early 1990s. The decline has been widely attributed to poisoning by diclofenac, which is used as veterinary non-steroidal anti-inflammatory drug (NSAID), leaving traces in cattle carcasses which when fed on leads to kidney failure in birds. Diclofenac was also found to be lethal at low dosages to other species in the genus Gyps.

Other NSAIDs were also found to be toxic, to Gyps as well as other birds such as storks. Organochlorine pesticide was found from egg and tissue samples from around India varying in concentrations from 0.002 ?g/g of DDE in muscles of vulture from Mudumalai to 7.30 ?g/g in liver samples from vultures of Delhi.

Dieldrin varied from 0.003 and 0.015 ?g/g. These pesticide levels have not however been implicated in the decline. Another hypothesis is that they have affected by avian malaria, as implicated in the extinctions of birds in the Hawaiian islands.

Birds were reported to adopt a drooped neck posture and this was considered a symptom of pesticide poisoning, but some studies suggest that this may be a thermoregulatory response since this posture is seen mainly during hot weather.

It has been suggested that rabies cases have increased in India due to the decline.

It has been suggested that Meloxicam (another NSAID) as a veterinary substitute that is harmless to vultures would help in the recovery. Campaigns to ban the use of diclofenac in veterinary practice have been underway in several South Asian countries.

Conservation measures have included reintroduction, captive-breeding programs and artificial feeding or “vulture restaurants”. Two chicks, which were apparently the first captive-bred Indian White-rumped Vultures ever, hatched in January, 2007, at a facility at Pinjore. However, they died after a few weeks, apparently because their parents were an inexperienced couple breeding for the first time in their lives – a fairly common occurrence in birds of prey.