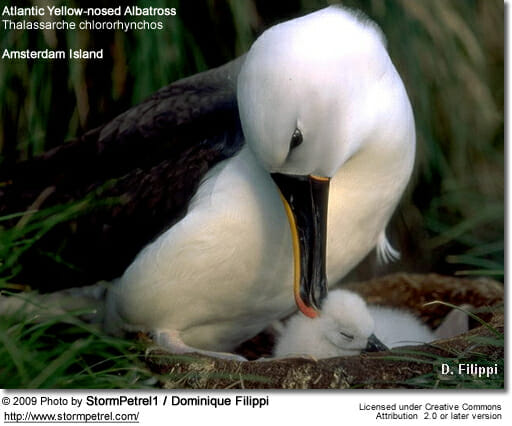 The Indian Yellow-nosed Albatross, Thalassarche carteri, in the albatross family, and is a smallest of the mollymawks. In 2004, BirdLife International split this species from the Atlantic Yellow-nosed Albatross;however Clements has not split it yet, and the SACC has not either, but recognizes the need for a proposal.

The adult has a pale grey or white head and nape, with a dark grey mantle, upperwing, and tail. Its rump and underparts are white, and its underwing is whote with a black tip with a narrow black margin at the leading edge. Its bill is black with a yellow upper ridge and a red tip. The juvenile has a white head and all black bill. 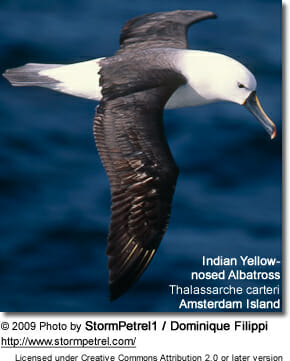 Like all albatrosses the Indian Yellow-nosed Albatross is a colonial breeder. It breeds annually, and the adults begin breeding at the age of eight years.

A mud nest is built in bare rocky areas or in tussock grass or ferns, and a single egg is laid. the nesting season begins in August, with laying occurring around September/October.

Incubation lasts around 70 days. After hatching the chick takes around 115 days to fledge.

It breeds on Prince Edward Islands, the Crozet Islands, Kerguelen Island, Amsterdam Island and St Paul Islands in the Indian Ocean. When feeding during incubation, birds will forage up to 1,500 km (930 mi) from the colony. At sea it ranges from South Africa to the Pacific Ocean just beyond New Zealand, ranging from 30° S to 50° S. 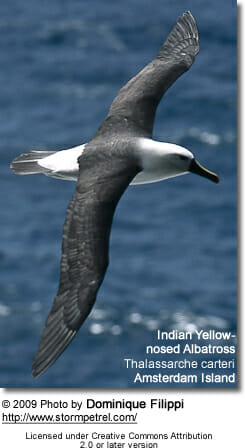 It is considered to be an endangered species by the IUCN, due to dramatic declines in the last seventy years, caused by interactions with longline fisheries and the outbreak of introduced diseases, such as Avian Cholera and Erysipelothrix rhusiopathidae. It has an occurrence range of 35,300,000 km2 (1.36E+7 sq mi) and a breeding range of 1,400 km2 (540 sq mi). A 2004 population estimate established that around a total of 65,000 adult birds are alive. This is based on earlier counts as follows: 27,000 breeding pairs breed on Amsterdam Island, and 7,500 pair on , 7,030 on Crozet Island, 50 on Kerguelen Island, and 3 pair on St. Paul Island for a total of 41,580 pair or 83,000 mature individuals. Take into account decreasing trends for the stated number.

Monitoring of the birds and studying of its foraging is an ongoing project on Amsterdam Island, and is a nature preserve. A vaccination has been developed but remains untested. Finally, in 2006, the Indian Ocean Tuna Commission adopted a measure to require longline boats to use a bird streamer south of 30°S, and South Africa requires its boats to use a variety of mitigation processes.

It feeds on fish, crustaceans and cephalopods. They share certain identifying features. First, they have nasal passages that attach to the upper bill called naricorns. Although the nostrils on the Albatross are on the sides of the bill. The bills of Procellariiformes are also unique in that they are split into between 7 and 9 horny plates. Finally, they produce a stomach oil made up of wax esters and triglycerides that is stored in the proventriculus (stomach). This is used against predators as well as an energy rich food source for chicks and for the adults during their long flights. They also have a salt gland that is situated above the nasal passage and helps desalinate their bodies, due to the high amount of ocean water that they imbibe. It excretes a high saline solution from their nose.