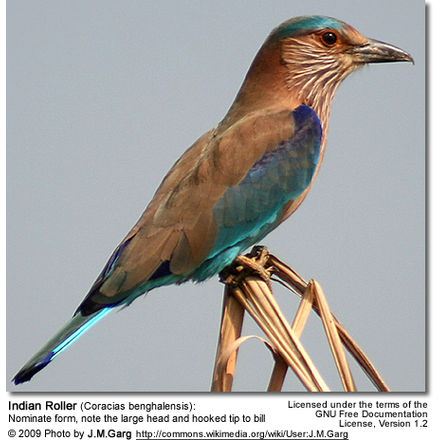 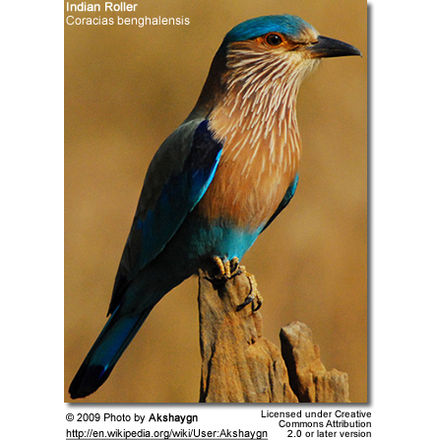 The Indian Roller (Coracias benghalensis) – formerly also called the Blue Jay – is a member of the roller family of birds that is found tropical southern Asia from Iraq to Thailand.

It is not migratory, but undertakes some seasonal movements. They are found in open grassland and light forest areas.

t is known for the aerobatic displays of the male during the breeding season.

The Indian Roller is a stocky bird about 26-27cm long and can only be confused within its range with the migratory European Roller.

Males and females are not readily distinguishable. The breast is brownish unlike as in the European Roller. The crown and vent are blue. In flight the primaries (longest wing feathers) and secondaries (shorter, upper “arm” feathers) show bright shades of blue. 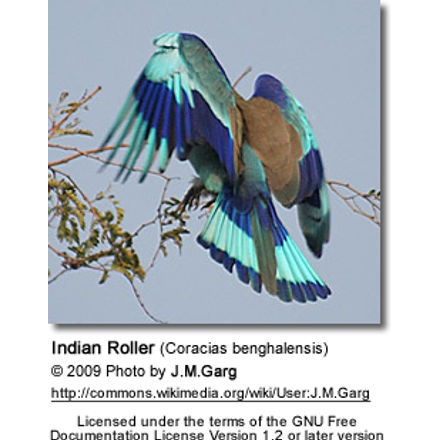 These birds are usually seen perched on prominent bare trees or wires. They descend to the ground to capture their prey which may include insects, arachnids, small reptiles (including Calotes versicolor and small snakes) and amphibians. Fires attract them and they will also follow tractors for disturbed invertebrates (= animals without internal skeleton, such as insects, larvae, earthworms, millipedes, snails, spiders). In agricultural habitats in southern India, they have been found at densities of about 50 birds per sq. km. They perch mainly on 3—10 metre perches and feed mostly on ground insects. Nearly 50% of their prey was beetles and 25% made up by Grasshoppers and crickets.

During summer, they may also feed late in the evening and make use of artificial lights and feed on insects attracted to them. They are attracted to swarms of winged termites and as many as 40 birds have been seen to perch on a 70 metre stretch of electric wires. They are often attracted to road kills. 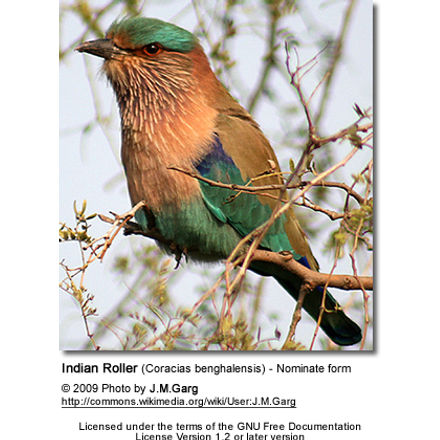 The breeding season is March to June, slightly earlier in southern India.

The display of this bird is a lapwing-like display, with the twists and turns that give this species its English name. Displays when perched include bill-up displays, bowing, allopreening, wing drooping and tail fanning

It nests in a lined hole in a tree or building, and lays about 3-5 eggs. Holes created by woodpeckers or wood boring insects in palms are favoured in some areas.

The call of Indian Roller is a harsh crow-like chack sound. Also makes a variety of other sounds including a metallic boink calls. Especially vociferous during the breeding season. 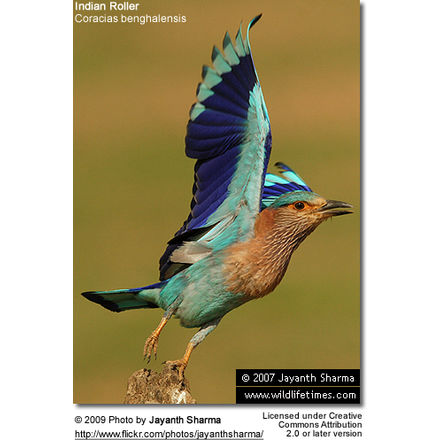 The display of this bird is an aerobatic display, with the twists and turns that give this species its English name.

They bathe in open water by plunge-diving into it, a behaviour that was once interpreted as fishing.

Blood parasites Leucocytozoon of the family Plasmodiidae have been noted as also parasitic helminth worms Hadjelia truncata and Synhimantus spiralis.

Being very common in the populated plains of India it is associated with legends. A local name is neelakant (meaning “blue throat”), a name associated with the deity Shiva (who drank poison resulting in the blue throat).

During former times, a captive roller would be released by the local ruler during festivals such as Dussera.

The Indian roller has been chosen as the state bird for the Indian states of Bihar, Karnataka, Orissa and Andhra Pradesh. 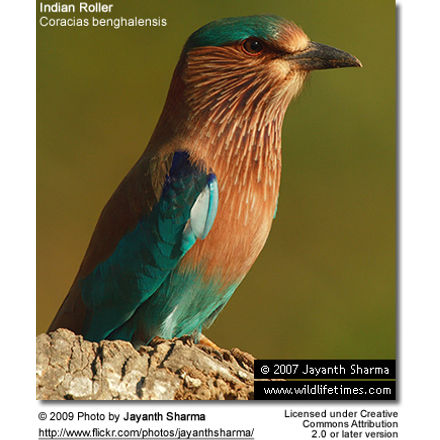