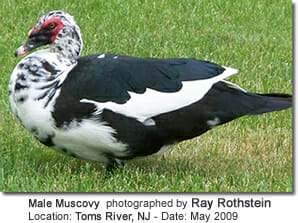 Some feral populations, such as those in Florida are said to present problems.

Muscovy ducks can breed near urban and suburban lakes and on farms, nesting in tree cavities or on the ground, under shrubs in yards, on condominium balconies or under roof overhangs.

Problems arise from aggressive begging for food and mess created by droppings. It is said that each adult duck produces about 150 g (1/3-pound) of droppings per day, and they defecate in swimming pools and on patios and docks. This presents a possible health hazard.

Legal methods to restrict breeding include not feeding these ducks, deterring them with noise or by chasing, and finding nests and vigorously shaking the eggs to render them nonviable.

Leaving the eggs to the nest will prevent re-laying as the mother duck would if the clutch were removed.

Feral populations can be humanely managed to reduce the number of offspring produced by resident feral ducks, by interfering with a duck’s natural nesting instinct. Simply destroying all nests or eggs will only result in the duck renesting in different locations until she has a successful hatch.

This is the key consideration when managing active nests. The duck must be allowed to incubate and hatch at least 2 ducklings, otherwise she will abandon the nest and immediately start a new nest elsewhere.

Allowing her 2 viable eggs will ensure that this duck will spend 3 weeks incubating and up to 12 weeks caring for her 2 ducklings.

The goal is normally to alter all but two of the eggs in a nest so that they are unable to hatch. This can only be accomplished during the laying period (before incubation).

If there is any doubt regarding the development of the eggs, a sampling should be taken to a local wildlife rehabilitator for candling.

During the laying period (before incubation has started – the eggs should still be cool, not warm), the eggs are still dormant and should be vigorously shaken to cause the internal structure to change (comparable to scrambling the egg inside the shell).

Each shaken egg should be dated with a crayon the day it is shaken and returned to the nest.

Removing the altered eggs could result in the duck abandoning the nest and starting a new one elsewhere if she feels a predator has discovered the site.

The eggs can also be coated with vegetable oil. Do not shake two of the eggs. These eggs should be labeled by crayon as “Viable”. Keep the unshaken eggs on top of or away from any oiled eggs.

The shaken eggs can be safely pierced and discarded one week after the female leaves the nest with her new ducklings, or 45 days after incubation began.

An incubated egg should never be shaken; it has begun development and rather than rendering the egg infertile it could result in a deformed duckling.

This information refers to domestic ducks in the USA only. It is a violation of US federal law to disturb the eggs, nests, or raise ducklings of all wild ducks without first obtaining the necessary permits.