The Island Thrush (Turdus poliocephalus) is a common forest bird in the thrush family of birds. Almost 50 subspecies have been described from Taiwan, through South East Asia and Melanesia, to Samoa, exhibiting great differences in plumage.

Several subspecies are threatened and three have already become extinct. 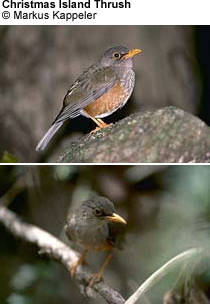 The Island Thrush is widely but patchily distributed across its range.It is present on the islands in Samoa, Fiji, Vanuatu, New Caledonia, the Solomon Islands, New Guinea and surrounding islands, many Indonesian islands, the Philippines and Taiwan.

It is, however, restricted to areas with bird communities of less than 25-35 species. On the larger islands, like Borneo or New Guinea. this means that it is only found at high altitudes, above 2750m.

Smaller islands can only support much smaller bird communities, and on these the Island Thrush may be found at lower altitudes. Two or more subspecies may exist on some islands, segregated into different habitats.

The ranges of many subspecies may be as small as a single island – for example the Kadavu subspecies T. p. ruficeps.

The 49 subspecies of Island Thrush vary dramatically in appearance, but almost all resemble a typical Turdus thrush and have a yellow bill, eye-ring and legs.

The Samoan subspecies, T. p. samoensis, is identical in appearance to the Blackbird (Turdus merula), whereas T. p. seebohmi of northern Borneo is dark above with a red breast and resembles the American Robin (Turdus migratorius).

Some subspecies have an entirely white head (including the male T. p. niveiceps, but not the female), and the Kadavu form T. p. ruficeps has an entirely orange head. 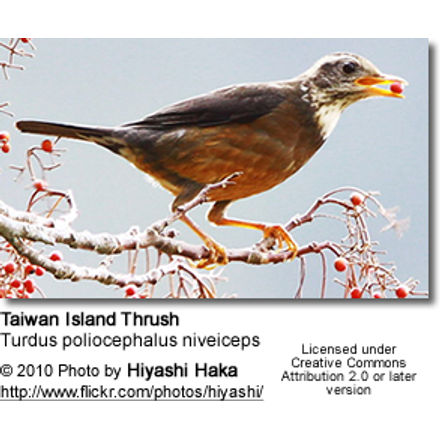 The Island Thrush has a very catholic diet, taking a range of invertebrates such as insects (mostly beetles), spiders, snails, earthworms, as well as carrion and even small reptiles. It will also take fruit and seeds, depending on what is locally available.

Its foraging technique is described as similar to that of the Blackbird, investigating the leaf litter and low branches in dense cover, but in some places will also forage in the canopy.

Most Island Thrushes breed in discrete two- to three-month seasons (the precise timing varies depending on location), although the birds in Fiji nest from June until January. They nest in a well-constructed cup well hidden in dense vegetation, laying from one to three eggs. 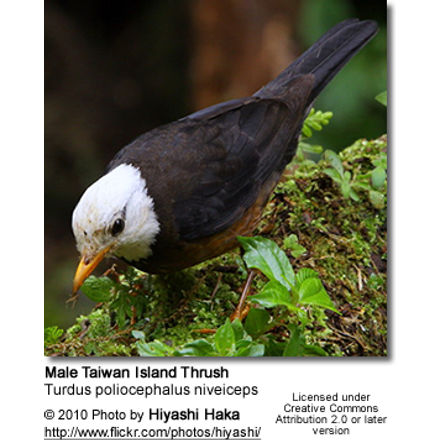 The Island Thrush is a member of the cosmopolitan genus Turdus (Linnaeus, 1758), one of the most widely distributed bird genera in the world.

The taxonomy of the Island Thrush is complex, and has defied attempts to split the group based on the four suspected morphological types.

The subspecies Turdus poliocephalus niveiceps from Taiwan represents the most distinct taxon and may be a separate species. This subspecies lives at the northerly range of the species, and is the only one in which the males and females differ in color.

There are also thought to be at least two further subspecies not yet described scientifically, both from the Indonesian island of Sulawesi. 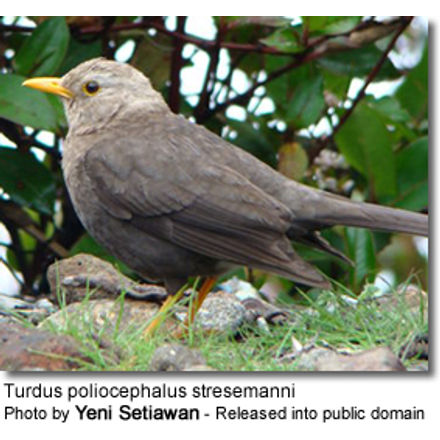 This subspecies is found on Christmas Island, and is threatened by the introduced yellow crazy ant, which is capable of killing nestlings.

Several other subspecies have declining ranges, including T. p. samoensis from Samoa, and T. p. xanthopus from New Caledonia, which is now extinct from Grande Terre and is restricted to 100 individuals surviving only on Yande and Neba.