The Jackdaws (Corvus monedula) – also commonly referred to as Eurasian Jackdaws – are small crows found from North West Africa through virtually all of Europe, Iran, north-west India and Siberia, where they inhabit wooded steppes, woodland, cultivated land, pasture and coastal cliffs. They have also adapted well to urbanized areas.

They are mostly resident, but the northern and eastern populations migrate south for the winter.

Jackdaws are closely related to the Daurian Jackdaws. Some authorities consider them to be conspecific (one and the same species).

All races are about the same size and are difficult to differentiate for the most part – likely because of hybridization between the various races, resulting in wide range of variations. 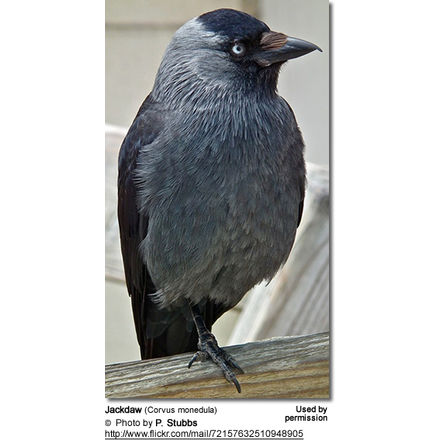 The Jackdaws are the smallest of all crows – measuring between 13 – 15 inches (34–39 centimeters) in length (including the tail).

The plumage is black or greyish black, except for the cheeks, neck and nape, which are light grey to greyish silver.

By end of March, their plumages look worn and adult Jackdaws molt their primary and secondary wing feathers and tail feathers from mid May to mid October (Cramp and Perrins 1994).

Jackdaws mostly take food from the ground but also forage in trees. They feed on insects and other invertebrates (= animals without internal skeleton, such as larvae, earthworms, millipedes, snails, spiders), weed seeds and grain, scraps of human food, stranded fish on the shore, and will also take food from bird tables.

Jackdaw nests are constructed in holes in rocks, trees or building.

Their calls are described as a loud “tchak-tchak” or “kak-kak”. They also make hoarse, drawn-out alarm-calls.

Crows are exceptionally intelligent birds. Some species have a neostriatum (forebrain) of the same relative size as the chimpanzee and human. They have been known to: