The Jamaican Mangos (Anthracothorax mango) – also known as Black Hummingbirds or Black Mango Hummingbirds – are found only on the island of Jamaica.

They are particularly common along the northern coast, where they inhabit varying levels of open lowland habitat, forest edges and man-made habitats.

At the end of the flowering season at higher elevations – usually from June through August – these hummingbirds usually migrate south to mid-altitude areas and the Blue and John Crow Mountains.

The plumage is blackish with attractive iridescent magenta streaks on the cheeks down to the neck, golden / orangey sheen on the shoulders, and blue, green and golden / bronze / orange streaks over most of the body.

Their black bills are down-curved.

Juvenile males have blue throats until they are about two years old. 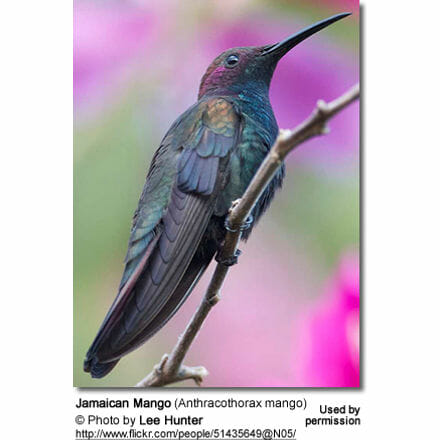 Jamaican Mangos primarily feed on nectar taken from a variety of brightly colored, scented small flowers of trees, herbs, shrubs and epiphytes. They favor flowers with the highest sugar content (often red-colored and tubular-shaped) and seek out, and aggressively protect, those areas containing flowers with high energy nectar. Their favorite nectar sources include the flowers of large trees, such as Inga, Erythrina, and Ceiba or kapok.

They nest year-round, but most nesting activities occur from January to May.

The female is responsible for building the tiny cup-shaped nest out of plant fibers woven together and green moss on the outside for camouflage in a protected location in a shrub, bush or tree (or as can be seen on the image to the right – they may take advantage of man-made structures). She lines the nest with soft plant fibers, animal hair and feather down, and strengthens the structure with spider webbing and other sticky material, giving it an elastic quality to allow it to stretch to double its size as the chicks grow and need more room. The nest is typically found on a low, skinny horizontal branch.

The chicks are brooded only the first week or two, and left alone even on cooler nights after about 12 days – probably due to the small nest size. The chicks leave the nest when they are about 24 days old.

Their nests have been observed on trees that were beset with Pseudomyrmex stinging ants. It is possible that these hummingbirds deliberately select such trees for nesting in order to deter predators.