The Japanese White-eye (Zosterops japonicus) – also known as the mejiro – is native to much of east Asia, including Japan, China, Vietnam,Taiwan, and the Philippines.

It has been intentionally introduced to other parts of the world as a pet and as pest control, with mixed results.

As one of the native species of the Japanese islands, it has been depicted in Japanese art on numerous occasions, and historically was kept as a cage bird.

Introduced to Hawaii in 1929 as a means of insect control, it has since become a common bird on the Hawaiian Islands, and has become a vector for avian parasites that are now known to adversely affect populations of native birds such as Hawaiian honeycreepers, as well as spreading invasive plant species through discarded seeds.

The Japanese White-eye is about 4 to 4.5 inches in size, with a green forehead and a yellow throat, a greenish back, and dark brown wings and tail outlined in green.

Like other white-eyes, this species exhibits the distinctive white eyering that gives it its name (mejiro also meaning “white eye” in Japanese). 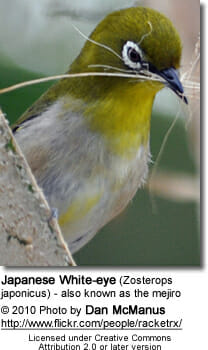 It is omnivorous, feeding primarily on insects and nectar.

When building nests, they often steal material from the nests of other birds