It is found in South-east Asia. It inhabits foothills in the terai and is rarer in evergreen forests and tea estates.

It is about 46 cm long. It is confusable with Crested Goshawk or the Crested Hawk-eagle in flight, but can be distinguished by the longer upright crest, very broad and rounded paddle-shaped wings and mostly plain and pale underparts.

It has a white chin and a bold black mesial stripe.

It is resident in the terai of North India and foothills of the Eastern Himalayas from Eastern Nepal and Bengal duars to the Assam valley, western ghats in Southern India, southern Sri Lanka, Bangladesh, Burma, Thailand, Sumatra, Singapore and Philippines

The bird is typically seen in pairs making aerial sallies; crest held erect. Occasionally, the birds may be seen in small family parties of 3 to 5 seen in flight near edge of forests. 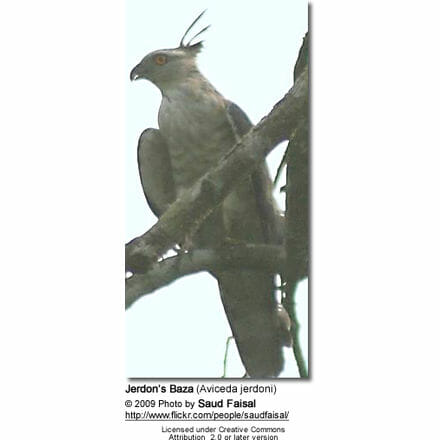 The birds indulge in ‘soaring and undulating’ display flights near the nest. Breeding season varies locally but the bird is known to breed almost the entire year with the exception of a few months around April and May.