The Jungle Bush QuailPerdicula asiatica is endemic to South Asia. specifically India and Sri Lanka. They have been introduced to the Réunion Island. They are found in small coveys and can be seen when they burst out into flight from under vegetation.

They prefer dry grasslands, but can also be found in wooded areas.

They are common in their range.

They are small birds no bigger than the rain quails. The male has a rufous red head with a slight brown mottling on top, and on the back with black, brown and yellow. The breast is barred with white and black. The wings are marked very similar to that of the grey partridge. The males have a small, but noticeable, spur. 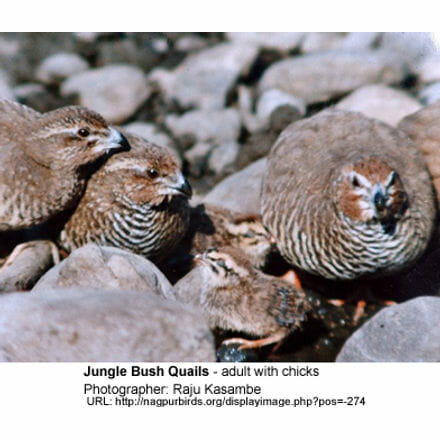 The female is alike, except for the salmon pink/red replacing the barring on the breast.

They are generally fairly tame and the male’s loud warbling trill is amazing for such small a bird.

They are not common in aviculture. Breeders have shown little interest, probably because of their drab plumage.

Minimum cage size is 4′ x 2′ x2′; however, they do best in an aviary setting, as they will feed on spilled bird seed on the aviary floor, facilitating housekeeping duties. Like many quails, this species is very flighty and a soft top such as 1″ foam is recommended if they are to be cage bred.

Whatever their housing is, they need to be provided with plenty of green branches to provide sheltered and a place for the hens to lay.

These birds are not winter hardy and some heat needs to be provided cold weather. Jungle bush should be kept in pairs as the dominant hen will kill the other females during the breeding season. Outside that season, this aggression doesn’t usually take place and several females can be kept together.

Cocks are fertile at about 6 months of age. Breeding season starts in mid-spring (April) and continues into the autumn.

The normal clutch size averages 5 to 7 eggs. The pure white eggs are laid on consecutive days. The incubation period is 19 to 20 days. Pairs are usually devoted. The hens will nearly always incubate the eggs alone, but the cock will assist in the rearing of the chicks.

Some breeders reported that the chicks seemed to loose any instinct to peck and feed themselves within a very few hours of hatching forcing them to be placed in a brooder. Scattering fine crumbles on the floor enticed them to eat.

Live food is not to be recommended as they are virtually impossible to wean on to anything else. They are also prone to rickets from about the age of 8 weeks onwards.

One oddity of the species was the ever-increasing thickness of the scales on their legs. A closed ring that fits a young chick will amputate the bird’s leg by the time it is several years old, unless the ring is removed.