The Jungle Crow(Corvus macrorhynchos) is a very widespread Asian species of crow. They are very adaptable and are able to survive on a wide range of food sources making them capable of colonizing new areas due to which they are often considered a nuisance, especially on islands. They have a large bill and due to this they are also sometimes calledLarge-billed Crows.

The overall size (46-59 cm in length) and body proportions vary regionally. In the far northeast in Japan, the Kuriles and the Sakhalin peninsula, it is somewhat larger than the Carrion Crow, while the form from India in the southwest of its range is appreciably smaller than the Carrion crow. 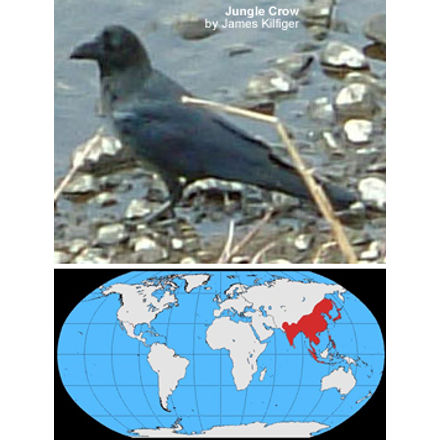 All forms have a relatively long bill with the upper one quite thick and arched, making it look heavy and almost Raven-like. Generally, all forms have dark greyish plumage from the back of the head, neck, shoulders and lower body. Their wings, tail, face and throat are glossy black. The depth of the grey shading varies across its range to almost black in the Indian form.

The range of this species is extensive and stretches from the northeastern Asian seaboard to Afghanistan and eastern Iran in the west, and south to India down to the Malaysian peninsula in the southeast. The Philippines also have a regional form. It occurs in woodland, parks and gardens, cultivated regions with a least some trees, but is a bird of more open country in the south of its range where it is not in competition with the Raven and Carrion Crow of the north.

Extremely versatile in its feeding, it will take food from the ground or in trees. They feed on a wide range of items and will attempt to feed on anything appearing edible, alive or dead, plant or animal. It is also one of the most persistent species and is quite bold, especially in urban areas. It is well known for its regular habit of killing domestic Chickens, more so than any other species of Crow. In Japan, feral crows are considered to be a pest for ripping open garbage bags and taking wire coat hangers for their nests.

The nest is a platform of twigs, usually high up on a tree with a preference for tall Conifers like Fir or Pine. There are normally 3-5 eggs laid and they are incubated for 17-19 days. The young are fledged usually by about the 35th day.

The voice is similar to the House Crow with which it is closest to, but deeper and usually more resonant and described as the usual loud “caaa-caaa-caaa”. However it makes a range of calls, some which could be described as “cau cau” and others that could be mistaken for a woodpecker drumming.