These colorful South American toucans have distinctive oversized, multi-colored bills for which they were named. Even though these beaks appear large and cumbersome, they are actually very light (yet strong), as they are made out of spongy and hollow bones that are covered in keratin (a light protein that also makes up human hair and finger nails).

As part of the courtship ritual, these toucans will use their large bills play to playfully “duel” with each other or to throw fruit into each other’s mouths.

The sociable Keel-billed Toucans are rarely seen alone. They typically live in small flocks of six to twelve and sometimes up to thirty – with smaller family groups existing within these flocks. They spend most of their days foraging for food or roosting high up in the canopies of forests.

Several of them may share one tree cavity for roosting and sleeping in. To accommodate several birds in such cramped quarters, they have learned to tuck their tails and beaks under them while sleeping, to create more room for the other birds.

The floors of the roosting cavities are often covered with pits from the fruit the toucans have eaten.

Because of their heavy wings they are poor flyers, but they are very agile and mostly move around by hopping from branch to branch.

These toucans are a great asset to the country of Belize, where these stunning birds are a popular tourist attraction; and this species is honored as Belize’s national bird. 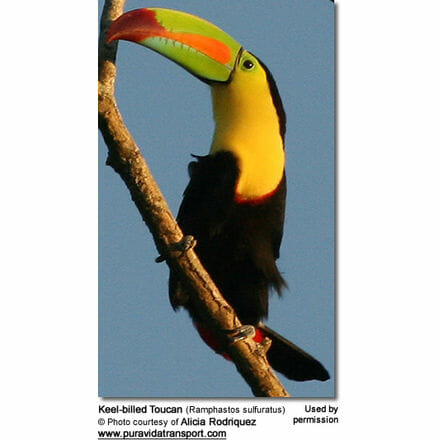 Keel-billed Toucans occur naturally in southern Mexico (where they are the only large, naturally occurring toucans), south through most of Central America (Guatemala, Belize, Honduras, Nicaragua, Costa Rica and Panama) to the northern parts of South America (northern Colombia and extreme northwestern Venezuela). They are resident throughout their range.

They inhabit humid, open rainforests and second growth woodland areas – up to about 6,300 feet (1,900 meters). They may also be found in plantations (mostly cacao and coffee); and in dry forests, however usually along rivers and streams. In Central America, they occur mostly on the wetter Caribbean side; except in northern Costa Rica – where they are found in the forests of the Pacific side.

In Panama, they are most common along the entire Caribbean slope, but isolated populations can also be found in the lowlands of the Azuero Peninsula, Pacific Veraguas and Chiriqui.

Even though the Keel-billed Toucans are not currently considered endangered, their existence is threatened by habitat loss and hunting for their meat, ornamental feathers and sport.

Additionally, their eggs and young are preyed upon by other birds, weasels, reptiles (snakes), and occasionally monkeys. They are also being captured for the pet market. 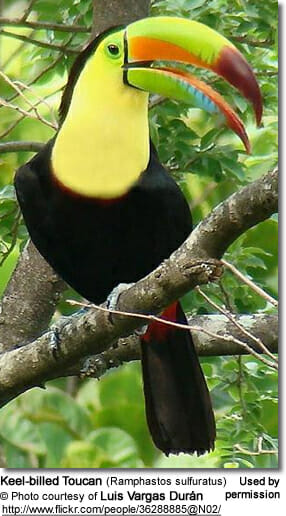 Keel-billed Toucans are amongst the larger species of toucans. They measure 17 to 22 inches (42–55 cm) in length – including the oversized, colorful, banana-shaped beaks, which alone are about 5 – 7.9 inches (12.7 – 20 cm) long and make up nearly one third of their body length and their long square-shaped tail.

Males average 22 inches (55.4 cm) in length and the smaller females about 20.4 inches (52 cm); however, their measures overlap with some individuals. Males also tend to have larger bills. Other than slight size differences, males and females look alike.

The plumage is mostly black, except for the yellow-green face, the bright yellow throat and cheeks, vibrant red feathers undertail feathers (vent), and white rump.

Molt: After each breeding season, all adults undergo the annual molt during which they replace their plumage with new feathers.

The beak is mostly green, except for an orange patch on each side and yellow markings on top and a yellow tip. The upper beak (or maxilla) is more extensively red tipped than the lower beak (or mandible), where some of the red is replaced by blue. The beak is edged with tooth-like ridges. The tongue is long, narrow and feather-like.

The eyes (irises) are olive yellow to green and the bare skin surrounding the eyes is bluish-green.

The legs and toes are grey-blue and the toes are arranged with two toes forward and two toes back (zygodactyl pattern), allowing them to easily grip around branches as they hop from one to another. The wings are wide and short enabling them to fly through trees.

There is less maroon on the nape (back of the neck) and the rest chest bands are more diffused over the black of the lower chest. Their eyes (irises) are pale grey.

Keel-billed Toucans are believed to be monogamous as pairs seem to remain together at least throughout the year.

Mated pairs are often observed in play, throwing fruit to one another. Males will perform various different vocal and visual displays, such as head and tail jerking along combined with singing; and they offer food to the females. Pairs will defend their favored fruiting trees from other fruit-eating birds. Threat displays and bill clashes (“bill duets”) are observed.

In Costa Rica, most breeding occurs during the rainy season – between March and June (Skutch 1971); and in Panama during the dry season in April (Van Tyne 1929).

In favorable conditions, toucans may produce 2 or 3 broods in a year.

They nest in natural or woodpecker-made cavities in trees, including Inga, Hura, Pentaclethra macroloba and Cupania. The nests are usually located at a height of 20 feet (6 meters) and usually have small entrance holes.

Their nests are constructed from palm tree logs and are not lined, and they are only used for nesting – not for roosting.

However, toucans start nesting up to six weeks before eggs are produced; probably to secure a safe place for when they are ready to actually start on the clutch. This is probably necessary due to great competition among toucans for suitable nesting cavities.

Before laying the eggs, the nest cavity is cleaned out until only a few wood chips are left in the nest lining the floor. At this point, they will carry small green leaves into the nest which are likely to serve as insect repellents. As these leaves dry up, the toucans will remove them again.

Over time, the nest is lined with numerous seeds and pits of various sizes (up to the size of large marbles), shapes and colors – which are a result from toucans disgorging the pits of fruits which form their food.

Keel-billed Toucans often reuse nests of previous breeding season, as long as they were able to successfully raise young in them. 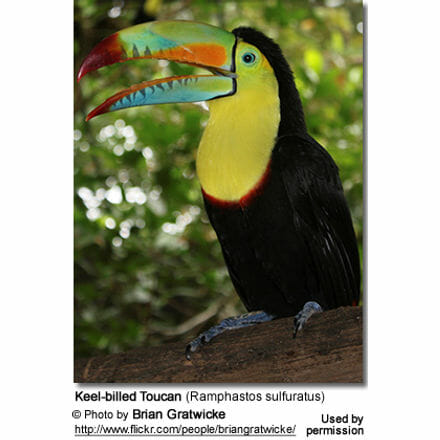 The average clutch consists of 2 – 5 (rarely one) glossy white eggs that are round with one end being slightly more pointed than the other, and are sculptured with irregular pitted grooves extending lengthwise along the egg. Both parents share equally the incubation duties taking turns brooding the eggs. The incubation commences after a clutch is complete (all eggs have been laid).

The young hatch after about 15 – 20 days of incubation.

Hatchlings: The hatchlings have closed eyes that won’t open for about three weeks; and they are completely naked without any protective down or feathers. At first pipping (breaking out of the shell), constantly repeated low rasping, squeaky buzz can be heard.

The chicks have pads on their heel pads that protect their feet from the pit-covered floor and keep them elevated from the wet floor until they fledge.

The young are completely dependent on the care of their parents, and the male and female again take turns feeding fruits to the chicks; both will keep the nest clean by removing fecal matter from the nest, and guard and protect the young.

They start exercising (flapping) their wings when they are about 18 days old to strengthen their wings in preparation of flight. Their eyes are fully open when they are 30 days old, at which point they are still featherless, but pinfeathers are starting to show up along the top of the head. A few days later, feathers are growing out rapidly all over the body. By the time they are 37 days old, they are fully feathered.

Their loud calls are described as a series of froglike “crr, crr, crr” followed by louder “cra, cra, cra” and ending with a a shrill “cree, cree, cree”. The voices of females tend to have higher pitched. They may sing in duets or several birds may sing in a chorus that is reminiscent to a pond of frogs. They also produce a low mechanical rattle vocalizations. Their calls are heard throughout the day.

Keel-billed Toucans are most vocal during the breeding season and in the subsequent period of molting. Hatchlings produce buzzy calls and nestlings whining or wailing sounds as they beg their parents to feed them.